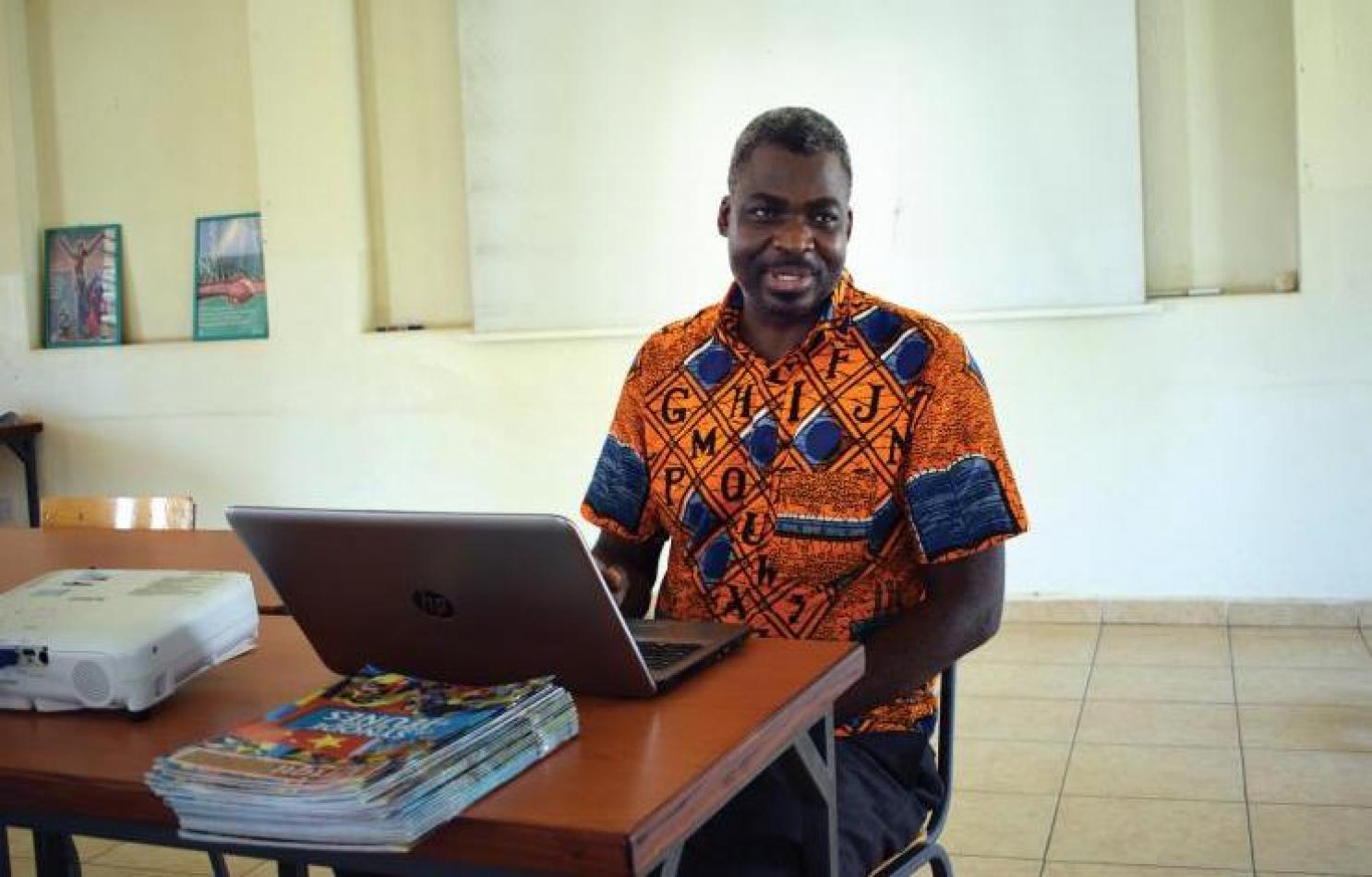 Tuesday, July 14, 2020
He specialised in Metallic Construction, shaping objects of copper and steel, because he wanted to improve the lives of people around him. He ended up mentoring young people who want to transform the world. A Comboni Brother Adossi Koffissan Matthias tell us his story.

I was born in 1976 in Amadenta, a village not far from Lomé, the capital of Togo. I worked hard and committed myself to studying. As a young Christian, I found myself involved in many parish activities. I was a member of the Marian Prayer Group. It was not ‘only’ a prayer group; in fact, it was very much activity-oriented. Meanwhile, I was in a technical high school, enrolled in a course of blacksmith and metalwork.

My parish covered the entire western suburb of Lomé. To run it, the bishop had called the Comboni Missionaries, who, in a short time, had opened 22 outstations. My village was served by the outstation of Athiémé, a couple of kilometres away from home. The priest would come to celebrate mass in the village only once a month. Instead a Portuguese brother visited us regularly, whose name was Alfredo Do Rosario. He was in charge of the Comboni postulancy for brothers in Lomé, but he always had time for us. Eventually, he was made responsible for our outstation.

Every Sunday, he would come to animate the Celebration of the Word. He was never in a hurry. After the celebration, he would not run away, as the priest had to in order to make it on time for mass in another place. He would chat with people, teach catechism to the catechumens, and visit some families. In the afternoon, he would break the ‘Sabbath rest’ by inviting people to join him in planting trees or giving a push to a development project. He convinced people that the time had come to build a proper church, and all competed in offering their service. A couple of months later, he began drilling two new boreholes, and trained people to repair the two old ones.

Truly, he become one of us. More than that: he become our reference person. That was the moment I decided I would be like him: a missionary brother.

In September 1998, I joined the Comboni postulancy in Lomé. Four years later, I was sent to Kinshasa for the first canonical year of Novitiate. In June 2003, I went back to Lomé for the second year, which ended in May 2004 with my first vows. Soon, I was sent to the Comboni Brothers International Centre, in Nairobi, Kenya, for the last phase of my formation. During this time I took a Diploma in Sciences of Human Development, and a Bachelor’s Degree in Leadership and Management.

Now I was ready to begin my work as a brother. I was dreaming of being posted to a mission field. God, however, had another plan for me. In fact, I was posted to the Comboni province of Malawi-Zambia, to be the director of the Comboni Technical College, in Lunzu (Malawi). I spent the following seven and half years trying to transform the school into an institution capable of providing the trainees with a holistic technical education.

The youths who came to us had completed secondary school education, but had not been selected to join university because of limited places available. We tried to instil in them the desire of becoming ‘transformers of society’.

We kept our fees lower than any other government technical college, thus offering young people from poor families the chance to raise their standard of life, whilst working to make the world a better place to live in. Whilst demanding strict discipline of the students, I worked with teachers and instructors to make use of additional classes to meet the personal needs of each student. We also imparted technical and entrepreneurial skills to our students. In fact, most of them were employed as soon as they completed the course, and continued to deliver exemplary work to their employers.

One of the unforgettable moments of those years was Saturday, 3rd December 2011, the day of my perpetual vows, in Cacaveli–Lomé. My family, relatives and friends joined me in praising and thanking God for all he has done for us.

In 2016, the major superiors of the Institute appointed me to the Comboni Brothers International Centre in Nairobi, in charge of the formation of the young Comboni missionaries who have just taken the first temporary vows and are at the last stage of their basic formation. After a year of preparation for the new service in Rome, I joined the community in Nairobi. It was for me a triple somersault. I was no longer in charge of the young brothers’ studies – all were following courses in the various institutes of higher education of Nairobi – but rather I was their elderly brother, ready to guide them through a new experience of religious life in an international and multicultural community, in view of their final commitment to the mission.

Today, I am still enjoying this experience. My role is a challenging one, but also fascinating. The brothers are not only students, but also young confreres who want to become what our Founder, St. Daniel Comboni, intended his missionaries to be. Our community is a mosaic of cultures which changes every year with the arrival of new scholastics. My main responsibility is to draw out of them the best gifts God has given them, and make them flourish, without clipping wings, but rather encouraging them to fly higher and higher.
[Comboni Missionaries]