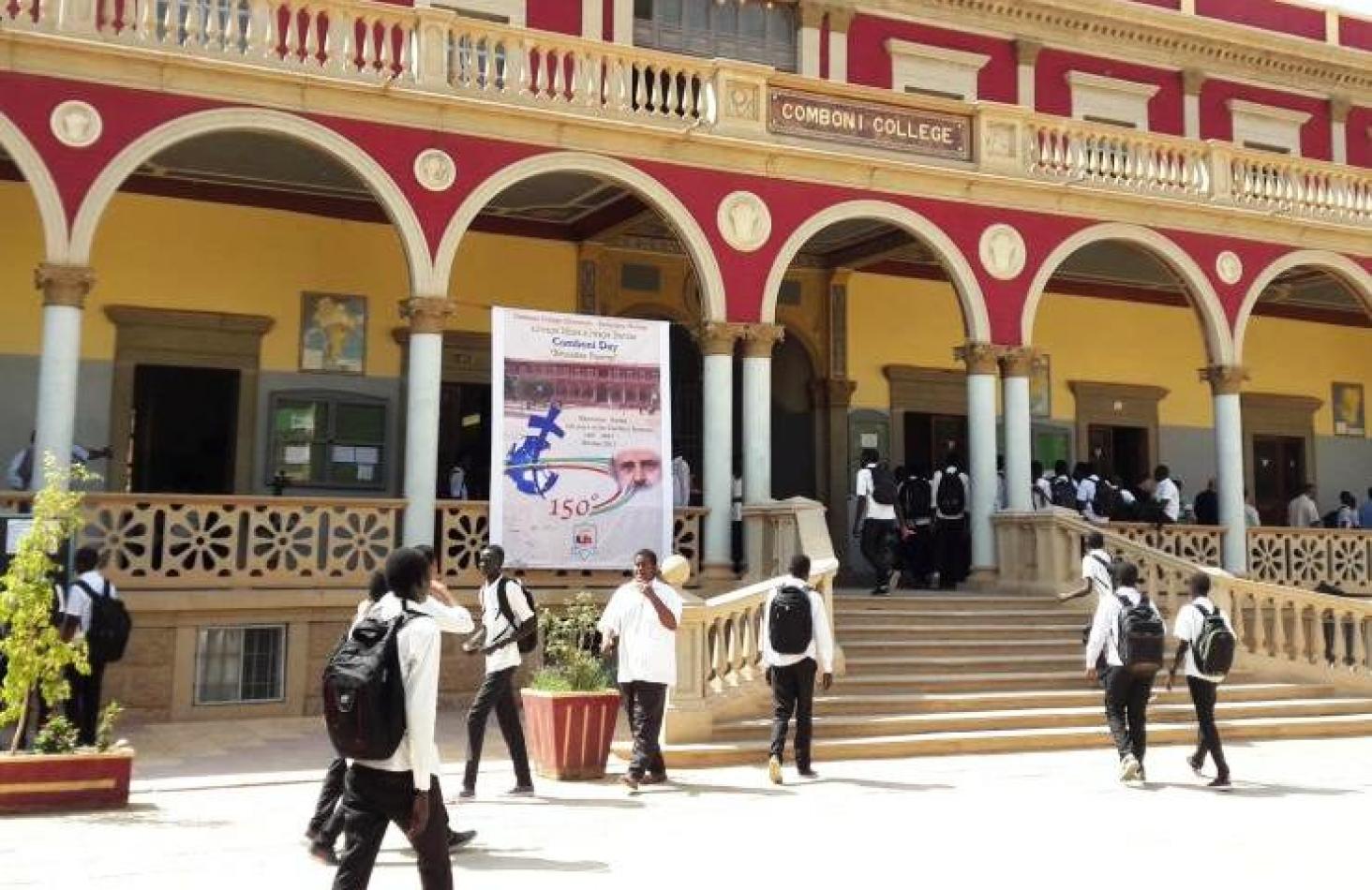 Friday, October 16, 2020
Since the start of the evangelisation of Sudan, education has been a priority for missionaries, and continues to be so for the local Church.

A warm morning in Khartoum. In the heavy chaotic traffic, we can only drive slowly. Our destination is a technical school but we are not sure of its exact location. Then we stop to ask a young lad who is selling water by the roadside. As soon as he hears the word Comboni, he immediately shows us the way. Curiously, the school we are going to is run by the Salesians. “In Sudan, all the Catholic schools are known as Comboni schools, even though many are not aware that Saint Daniel Comboni was the first bishop of the then Vicariate of Central Africa whose seat was in Khartoum and everyone associates the Catholic institutes of education with his name,” Spanish Comboni Father Jorge Naranjo tells us.

In 1867, Mons. Daniele Comboni worked out his plan for the regeneration of Africa, placing education at the centre of his work and opening a number of schools in Sudan. Comboni died in 1881 at the age of fifty and, four years later, Mohammed Ahmed Al-Mahdi [1844-1885] successfully waged war against the Ottoman-Egyptian military government and gained a notable victory over the British. He then created an Islamic state which wiped out the Christian presence. His successors, called ‘Mahdists’, led by his successor (khalīfa) ʿAbd Allāh al-Taʿāysh, were defeated by the British in 1898. Soon afterwards, the missionaries could return to Khartoum.

In 1900, the first two schools after the Islamic revolution were opened in Omdurman: the Comboni Boys and St. Joseph’s Girls’ School.

Even today, both schools are continuing their work of education. The girls’ school is now called Comboni Girls’ School, and there are 160 pupils in the nursery school, 915 in the primary school and 97 in the secondary school. The Headmistress, Comboni Missionary Sister Cristina Maestroni tells us: “Judging by the number of applications for admission that we receive every year, we may say that the school is highly regarded for its educational standard.”

Fr. Jervas Mayik, Headmaster of the boys’ school emphasises: “The school has always been considered a centre of excellence. We have many applications every year.” In order to respond to so many requests, the Combonis have opened three large schools in the outskirts of Khartoum. Father Salvatore Marrone, manager of the schools comments: “in reality the periphery schools came about as emergency schools in the eighties when the war in the South caused an enormous influx of South Sudanese to Khartoum and Omdurman. With time, we managed to order and consolidate the educational situation. At the moment, the pupils, boys and girls, number 1424.”

Today, in the Archdiocese of Khartoum alone, around 26,000 students frequent the 59 schools that bear the name of Comboni. Among the various educational institutions, the Comboni College of Khartoum (CCK) stands out.

The CCK began as a quality secondary school. The British colonial government, with a document issued in 1929, authorised the school only for non-Sudanese students. It was inaugurated that same year with just fifteen students.

The school enjoyed immediate success and the school authorities of the time began to pressure the British government to allow Sudanese students to attend the school. The British gave in in 1936 and the Sudanese enrolled en masse: many of them would make up the section of society that achieved independence in 1956.

The present headmaster, Father Norberto Stonfer, recalls that, “in the CCK alone, there were 24 Comboni Missionary Brothers and Fathers, totally dedicated to teaching. They gave a very sound formation. Those were the golden years that forged the ‘Comboni Trademark’ which still continues to this day.” For many years, the examination results of the CCK students were the best in the country and the students immediately found work. An example of the appreciation of Comboni College occurred in 1964 when the Sudanese government ordered the expulsion of all the missionaries in the country with the exception of those working in the College. Father Norberto is in no doubt that it was the former students of the CCK who appealed to the government over the expulsion.”

This year, the school has 1,100 students who may study in Arabic or English, even though it is a challenge to find Sudanese teachers with a good standard of English. In 2014 a female section was opened with 300 students to allow South Sudanese adolescents, who fled from the bordering country due to the civil war of 2013, to continue their secondary education.

It is important to remember as well the primary school that is part of the CCK and was founded in 1949. At present it has 1150 pupils in 23 classes, with an average class size of 50. The headmaster, Fr. Diego Dalle Carbonare, says that this limit has been established to improve the standard of teaching, “since the average class size in Sudanese schools is between 70 and 80 pupils.”

A third of the students are Christian – mostly from South Sudan – and the rest are Muslim. Students in Catholic schools may choose either Christianity or Islam but elsewhere the only option is Islam. “This is to force them to study the Koran and there are also exams, which is a way of inducing Christians to convert,” Father Diego asserts. Nevertheless, it is possible that things may change in September this year with the introduction of the new academic curriculum which is more universal and is open to interreligious dialogue.

Since 1999, a group of CCK teachers have been insisting that those in charge should provide a broader range of courses. With the support of some Sudanese Muslims and that of Cardinal Gabriel Zubeir, the Catholic higher institute of education in Sudan, Comboni College of Science and Technology (CCST), was established.

From its beginnings, the CCST was open to boys and girls regardless of origin or religious affiliation, and it stands out as a centre of interreligious dialogue and encounter. It is the only university with chapels and rooms for Muslim prayers.  Over the years, the CCST has opened new courses. Today it offers four university qualifications, two three-year specialisation courses, courses of ongoing formation in Italian, Spanish and English, teaching techniques, informatics, and a pioneering course in Sudan on palliative care for health workers.