In Egypt in the Spirit of Comboni 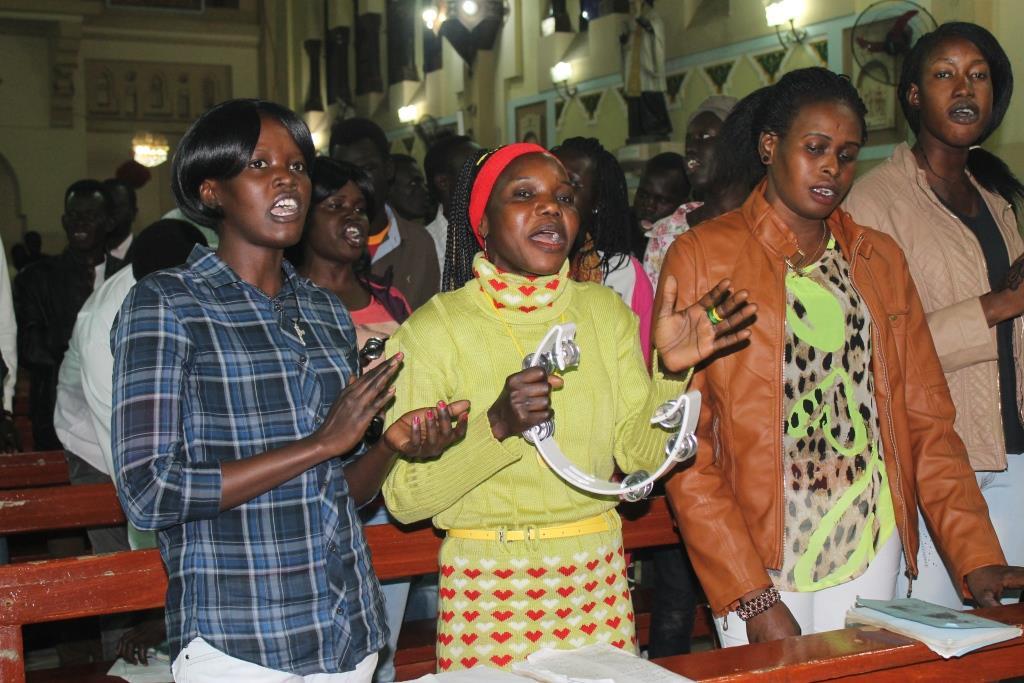 Monday, March 7, 2016
Eight Comboni Missionaries representing the provinces/delegations of Egypt/Sudan, Kenya, Malawi/Zambia, South Sudan and Mozambique, together with the Institute’s secretary general for mission promotion, gathered from February 26 to March 4 to hold the sub-continental assembly of mission promotion and media of English-speaking Africa and Mozambique (APDESAM). The venue for the meeting was Comboni House of the Comboni Missionary Sisters in Cairo, Egypt. In the picture: Sudanese refugees in the community of Sakakini.

In the church
of Cordi Iesu.

From February 26 to March 4, eight Comboni Missionaries representing the provinces/delegations of Egypt/Sudan, Kenya, Malawi/Zambia, South Sudan and Mozambique, together with the Institute’s secretary general for mission promotion, gathered to hold the sub-continental assembly of mission promotion and media of English-speaking Africa and Mozambique (APDESAM). The venue for the meeting was Comboni House of the Comboni Missionary Sisters in Cairo, Egypt.

The activities started on Friday, February 26 with the introduction of the participants, the drafting of the agenda and administrative details. In the name of the hosting province of Egypt/Sudan its vice provincial, Fr. Richard Kyankaaga welcomed the guests and then gave an overview on the history of the province itself, its composition and the missionary activities it carries out in the context of a Muslim majority and of dialogue with other Christian churches.

In turn, Fr. Jorge García, SGMP, also welcomed the participants, shared the greetings of the superior general and his council and encouraged the members to work with great care, despite the reduced number of participants due to last minute difficulties and immigration problems.

A day and a half during the weekend were given to ongoing formation which included visits to the pyramids and the Egyptian Museum, and time spent with the communities of Zamalek (parish and Dar Comboni), of Cordi Jesu (the church of the Sacred Heart, the Foyer, the Daniel Comboni chapel and the offices of the center for mission promotion).

One of the most intense moments of this first phase was the visit on Sunday afternoon to the community of Sakakini with its parish dedicated to St. Josephine Bakhita. There we celebrated the Eucharist with the Sudanese refugees. The Mass was celebrated in Arabic and the presider was Fr. Angelo Giorgetti, the provincial of Egypt/Sudan. After Mass, the participants spent some time with the faithful and then had supper with their Comboni brothers.

February 29 was given totally to ongoing formation. Fr. Richard Kyankaaga read and commented on the paper Dynamics of Mission Promotion in Today’s Africa, prepared by Fr. Paulino Mondo from Uganda who was not able to attend.

In the afternoon of the same day, Fr. Jorge García, described the activities of his secretariat by answering the three questions that had been proposed for the preparation of the report to the 18th General Chapter (2015): “Where do we stand now? To what type of conversion are we called? What are our dreams for the future?

In the first session of the next morning, Fr. Jorge continued his presentation speaking of what he sees as the most important elements emerging from the Chapter concerning mission promotion in a context of change at all levels and the reorganization of the Institute which has decided to merge the secretariats of evangelization and mission promotion together with the office of JPIC and the office of the Comboni Lay Missionaries into a single General Secretariat for Mission.

The rest of the morning, following the suggestions emerged from the assembly held in Maputo, Mozambique in 2012, Fr. Joseph Maina moderated a discussion dealing with a variety of topics: all circumscriptions – except Malawi/Zambia – have a full time promoter; the circumscriptions have revised and rewritten the charter of mission promotion in line with the guidelines approved at the Maputo assembly; there is no clear information to allow us to start again the production of Zikomo in Malawi/Zambia. The sessions that followed were taken up by the reports from the provinces of Egypt/Sudan, Kenya, South Sudan and Mozambique. In all the provinces there is an intense activity of basic mission promotion as well as in the digital, electronic and printed media.

On March 2, the Malawi/Zambia and the New People Media Center of Nairobi presented their reports.

On that same day, having heard the reports and having read again and commented upon the guidelines formulated in Maputo, the participants attempted to answer some fundamental questions: What are the contents of mission promotion in the APDESAM? How can we cooperate with the rest of the Comboni Family and with the local Church? How to network and share in this field? How to reach self-sufficiency? What is the importance of and what are the expectations arising from this type of assembly in the APDESAM?

Prior to the conclusion of the last day, the participants stressed some further points: the zonal promoters need to stress the importance of mission promotion when addressing their provincial assemblies; disapproval was registered for the absence of some circumscriptions; a resolution was passed to open a Dropbox account in order to facilitate the internal sharing of material; start mission appeals in our parishes.

It was decided that the next Assembly will take place in Addis Ababa, Ethiopia in 2018 and will deal with the ongoing formation of the promoters.

In the afternoon, Fr. Andrew Bwalya met with some of the members to teach them the advantages of the use of the Dropbox account. He also gave some practical suggestions so that mission animation promoters and media directors may start using it soon.

In the final evaluation of the meeting the participants agreed over its importance, thanks also to the fraternal atmosphere in which it took place and to the satisfaction in seeing that, despite the poverty of both personnel and means, mission promotion in English-speaking Africa and Mozambique is alive and well.

The missionaries in the comunity of Cordi Iesu.