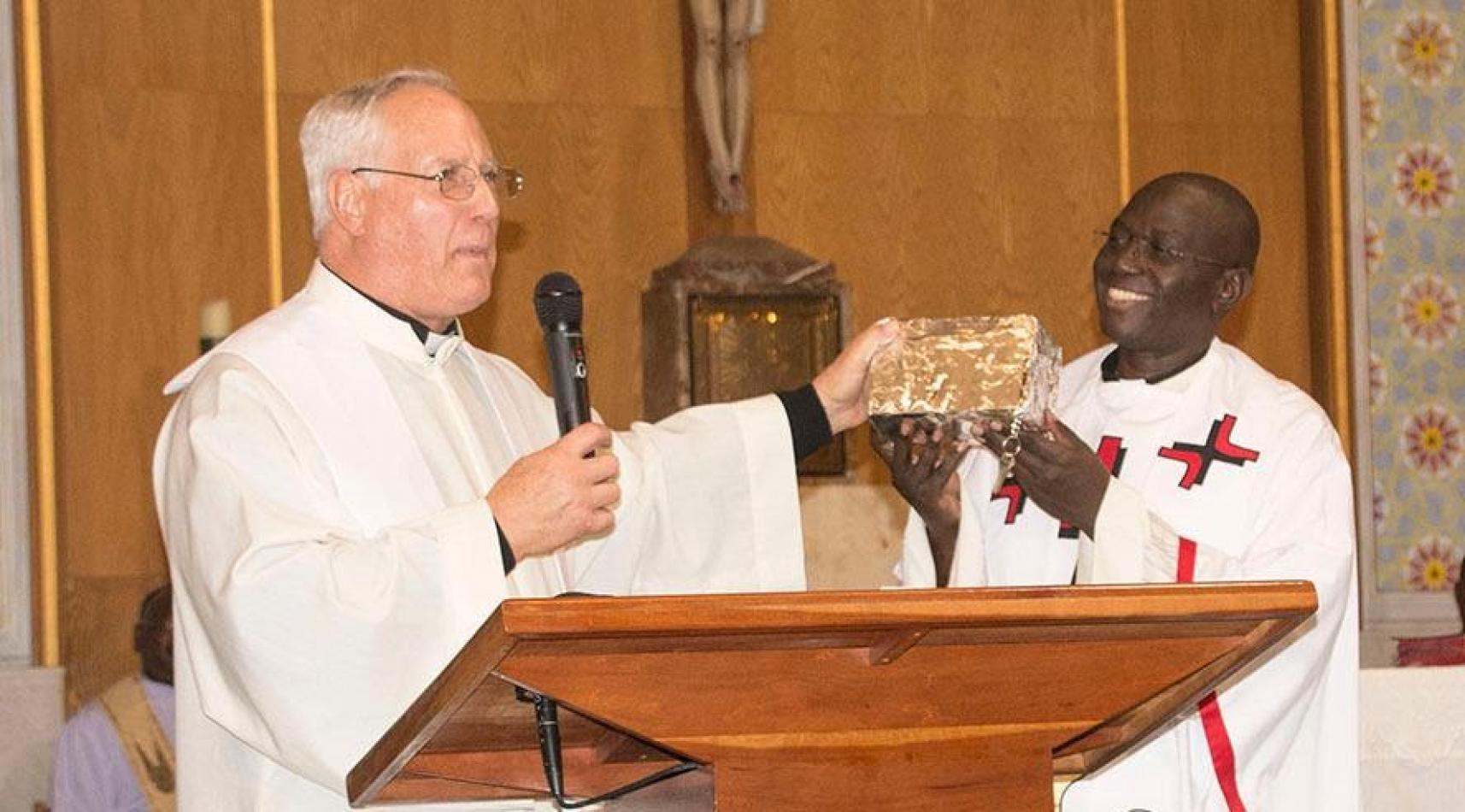 Saturday, March 14, 2020
For the first time in its eighty-year history, the North American Province (NAP) of the Comboni Missionaries has elected an African as its leader. Father Ruffino Ezama, originally from Arua, Uganda, began his three-year term as provincial superior in January 2020. (In the picture: Outgoing provincial Father John Converset gives the keys to the office to Father Ruffino Ezama).

On a bright, cool January afternoon, the Comboni Mission Center chapel filled with the gentle murmur of friendly voices praying in solidarity for Father Ruffino Ezama as he began his term of office. The special Mass gathered friends and supporters to thank outgoing Provincial Father John Converset for his years of service, and to pray for Father Ruffino as he takes on this new challenge.

Father Ruffino says he takes on this new role with a “spirit of gratitude. It is a way to say thank you to the people in North America who have supported and continue to support overseas missions.”

“I am a fruit of what the Comboni Missionaries from the NAP did for Uganda,” Father Ruffino said.

The Fruit of Decades of Missionary Work

For nearly one hundred years, the Comboni Missionaries have served the people of Uganda — in parishes, schools, and communities. Father Ruffino spent his formative years surrounded by Comboni Missionaries, eventually discerning a call to that same religious order.

“Becoming the first African superior here is a way of saying, ‘Look, I’m a fruit of what you people did, though you probably didn’t see it,’” he said. “And this brings us to the oneness of the Church, at the moment where we look at the different backgrounds from where we come and see that each one has a little to contribute.”

During Mass, the Congolese and Cameroonian choir led the congregation in hymns of praise in Swahili and English. This vitality and sharing of cultures is an example of what Father Ruffino hopes to bring to the NAP. In this way, people can easily recognize the universality of the Church.

Father John Converset delivered the homily, concluding by giving Father Ruffino the keys to his office attached to a large package, telling him that the package symbolized “a sort of Pandora ’s box, although not all of its contents are bad.”

“It represents everything you’re going to have to deal with—difficult and easy, joyful and painful. It represents responsibilities, things unforeseen to us; tensions, problems, options, choices you can make with your council. And these are the people who are going to help you,” Father John said, pointing to the crowd of friends in the nave.

Father Ruffino has been a member of the NAP since 2009 when he was assigned to work in Cincinnati. For six years he served on the provincial council, helping make decisions about the province and its future. The past three years he has worked as the mission director, helping coordinate mission appeals, and visiting parishes and schools.

His work as provincial superior will be quite different. He describes the day-to-day work as more administrative — responding to correspondence, attending meetings, and the like.

“It will mean a lot of work understanding the issues more deeply and taking them into prayer, so it is not just my way of deciding, but for the good of the congregation,” Father Ruffino said.

This first year Father Ruffino will be busy visiting the Comboni Missionary communities spread throughout North America — Los Angeles, Chicago, Newark, Cincinnati, and Kitchener, Ontario. He plans to help vocations grow for the mission society. His priority though, will be to bring a “new vitality to the province and mission.”
[Lindsay Braud – Comboni Missionaries (NAP)]