Fr. Robert Ndungu: “A reflection on the violence and looting in South Africa” 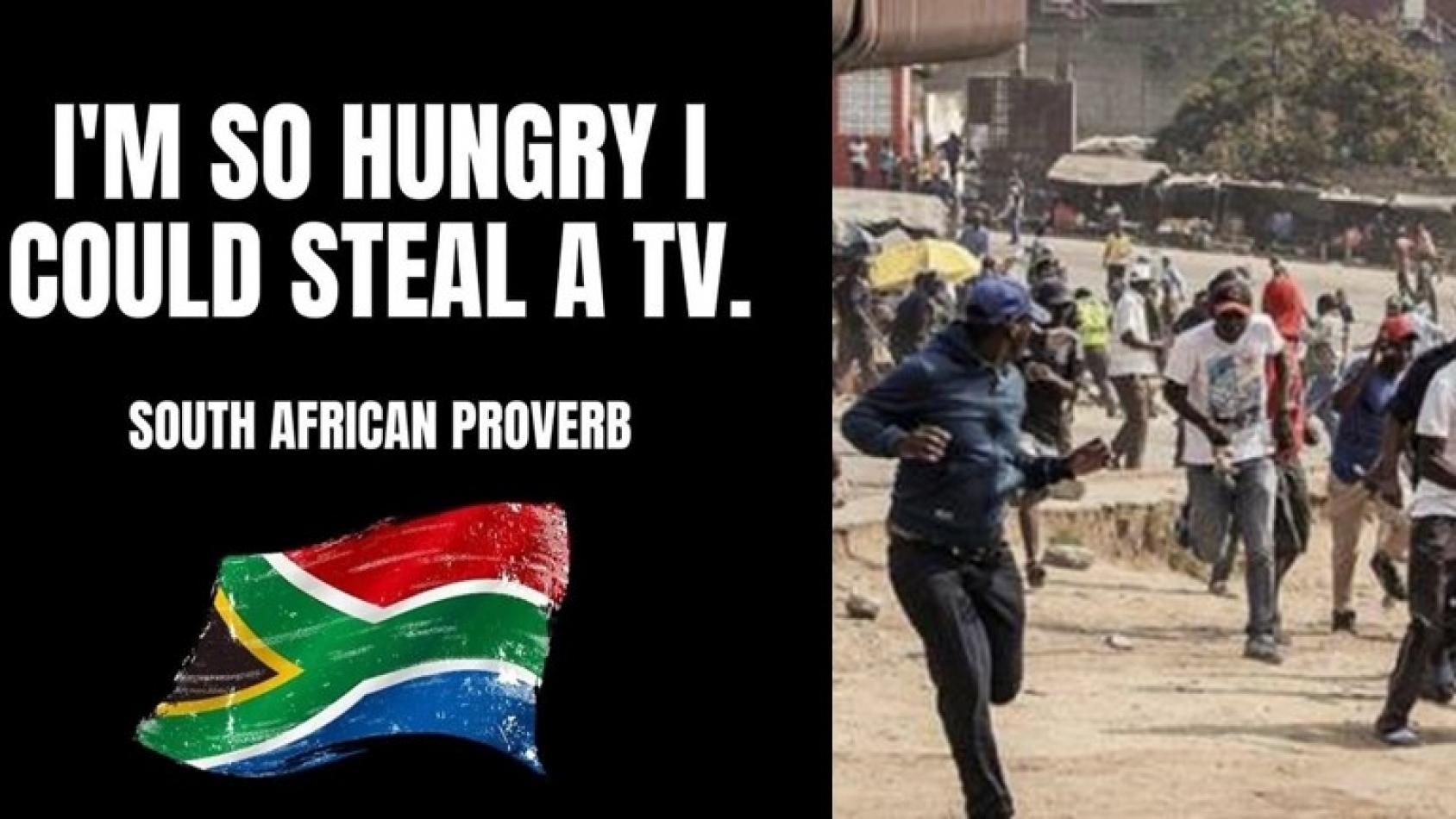 Thursday, July 29, 2021
The video clips and images of the violence, destruction of property and loss of lives in South Africa after the incarceration of former president Jacob Zuma has left many South Africans and the rest of the world shocked. It was like the devil and his army had descended on the province of Gauteng and KwaZulu Natal (KZN). […]

TO LOOT OR NOT TO LOOT?

Watching live video coverages from different television channels, you could see throngs of people, going wild, invading private properties and malls, strewing items all over the place as they scrambled to fill trolleys, bins, boxes, trays, and anything they could use to carry the stolen goods to their locations.  It is shocking that some came with bakkies to ferry stolen items while others carried them on their backs and heads. Children were also seen helping their parents in emptying the stores and running away cheerfully with toys and candies in their small hands! While the minister of state security admitted their late but proper response, the AmaZulu King’s remark was historical, “Our People have committed suicide”.

This is not the first time that we are witnessing destruction of property and even loss of lives in the name of democracy and ‘freedom of expression.’ There have been similar sporadic cases where private properties and businesses belonging to foreigners have been destroyed and plenty of items stolen. We have also witnessed government facilities and other structures razed many times in the name of service delivery protests.

The madness of the past week leaves more than is desired. There have been attempts to uncover motives behind the looting other than the incarceration of Zuma. A few individuals have been identified and arrested as instigators.  Sooner or later, we may see prosecution taking place and happily conclude that justice has been done.

My interest is to look at looting per se and borrow a few ideas and practical examples from history. On 8 March 2010, Katherine Schulten, reflecting on historical catastrophes and social disorders in the world, posed a question to students 13 years and older; “When is looting morally okay?”

The respondents had ambivalent opinions on the question.  Though they had no qualms in permitting the looting of basic necessities such as food and diapers in times of crises and catastrophes, they expressed doubt when people loot plasma TVs, fridges, dishwashers and other luxurious goods. They opined that the latter looters were not desperate but greedy and selfish; however, it may be that they went to loot food and found nothing, and thus elected to lay their hands on something with the intention of selling it to buy food.

Looting is the act of stealing, or the taking of goods by force, in the midst of a military, political, or other social crisis, such as war, natural disasters (where law and civil enforcement are temporarily ineffective), or rioting. The proceeds of all these activities can be described as booty, loot, plunder, spoils, or pillage (en.wikipedia.org).

During natural disasters many civilians may have no option but to take, ‘steal’ in order to survive. Governments are always in a moral dilemma in drawing a line between unnecessary looting and necessary scavenging.  It is not uncommon that in some instances, looting may be tolerated or even encouraged by governments for political, religious, social or economic reasons. A careful study of looting that happened in Iraq, Syria and Egypt, suffice to corroborate this.

According to the BBC News, Tuesday 21 July 1998, Media Indonesia reported Mr Saefuddin (food minister) as saying that “looting of less than five per cent of property was tolerable”.

In his book, In defense of looting: a riotous history of uncivil action, Osterweil (2019)[i] argues that looting is a tool that results in positive change to society and that looting helps redistribute property and wealth in an unequal society.

A research done by Binu Jacob et al. (2008)[ii] titled, Disaster mythology and fact: Hurricane Katrina and social attachment, debunked the myth that the social contract is tenuous at best and that major natural disasters and other crises trigger mass disruption, disorder, and social breakdown including looting. While there were well-documented instances of brutal hijacking, rioting, and looting in New Orleans after the deep flooding caused by the hurricane, there were many more reports of altruism, co-operation, and camaraderie among the affected population.

Not all looting is the same!

Studies on looting have categorized it into three stages: stealing food to survive which is accepted by most; stealing of luxuries such as plasma TVs, the motive of which is very difficult to establish; the third level is the “state of nature” according to Thomas Hobbes [iii] manifested in rampage, mayhem, class warfare and ethnicity.  Though the first and the second stages, may be morally permissible, the third stage is universally condemned since it is anarchy, a “war of all against all”.

When is looting morally permissible?

In his article, The moral ambiguity of looting, McNeil Jr (6 March 2010)[iv] argues; “It is hard to name a single disruption in the social order, natural or man-made, that has not triggered looting somewhere. Thick snow? Chicagoans looted in a record blizzard in 1967. Montreal residents looted during a 1969 police strike. In 1911, Sicilians dodged lava flowing out of Mount Etna to loot homes abandoned in its path, and don’t forget the sacking of the National Museum in Baghdad, in the wake of invasion in 2003.”

Recollecting about the Hurricane Katrina and earthquakes in Chile and Haiti, McNeil Jr asserted “If crushed bodies were the enduring images of Haiti’s earthquake, the most memorable ones of Chile have been of looting.  Nonetheless, a pattern that now is a cliché of disaster journalism broke out there as well: early reports of people raiding markets for food and diapers were quickly followed by pictures of people carrying TVs and dishwashers off into a city with no electricity. Intact stores were broken into. A department store in Concepción was set ablaze. In a few places, roving bands robbed anyone they could. Residents who formed a self-defence posse were quoted saying that the “human earthquake was worse than the geological one.”

He thus posed the questions: “When are desperate people entitled to help themselves, and to what? At what chaotic point between the diapers and the dishwasher may the police shout, “Drop that… or I’ll shoot?”

Tricia Wachtendorf, Associate Director of the University of Delaware’s Disaster Research Centre, objects to even the use of the words “looting” or “crime” to describe taking essential goods, noting that nobody objected to firemen taking water from stores near Ground Zero to rinse the World Trade Centre’s smoke from their eyes.

James M. Glass, a politics professor at the University of Maryland, postulates that the morality of looting should be based on the facts of each case.  He affirms, “You can argue that hungry men stealing from stores is okay, but hungry men attacking a woman with a bag of groceries for her kids is a moral quagmire. It’s not a situation where anybody comes out in a good way.”

McNeil Jr observes, “Though looting starts spontaneously, how quickly it stops appears to depend on how rapid and severe a response it meets. That, in brief, is the argument for using force decisively.”

In 2019, Chile’s president, Michelle Bachelet responded to looting in a very ingenious way; within two days of her decision looting had subsided.  She used a two-pronged approach; on one hand she condemned looting, imposed curfews and sent in 14 000 troops, while on the other hand she asked the nation’s grocers to give away food and necessities. Some authorities were indifferent as police let looters take only basic goods. Though some defiant traders trebled prices, in poor areas of Concepción, soldiers handed bags of food out of dump trucks, and in hard-hit coastal towns, sailors distributed it from dinghies.

President Bachelet’s decision, said Sergio Serulnikov, a history professor at the University of San Andrés in Buenos Aires, recalled an unusual aspect of Argentina’s 1989 food riots, which lasted a month. No disaster triggered them; instead, hyperinflation had left the poor starving. At first, groups of shantytown women entered stores en masse, loaded baskets and left without paying, but also without touching the cash registers or breaking anything. Later, that discipline disappeared and mobs smashed their way into shuttered markets. With the government helpless and the police wavering, Prof. Serulnikov said, “storeowners started bargaining, offering to give everything away if their stores were not damaged.”

More than 200 South Africans including police died during the recent violence and looting. There are allegations that business owners may have responded with excessive force and with firearms in protecting their properties. What comes to mind is the 1967 phrase associated with Miami police Chief Walter Headley, “when the looting starts, the shooting starts".[v] With licensed and unlicensed guns in people’s hands, it will be a herculean task to establish who fired the first shot.

When looters come back!

I feel that we may have to adopt some techniques in dealing with this almost perennial problem of looting in our country. We may borrow a leaf from Chile’s president, Michelle Bachelet. Some practical and simple suggestions may be of help:

1) Organizing periodic food vouchers for poor and unemployed people living within the vicinity of the malls. They are the first to see ‘fire burning’ and raise the alarm while we are safely locked in our comfortable homes. In the end we need to ‘teach them to fish and not to receive fish perpetually’.

2) Give priorities on jobs for people living around. Let them feel that they ‘own’ the businesses and are part of it and can defend it as their means of livelihood. This is what some communities did to ward off looters from other areas.

3) The business community should have sponsorship projects to empower the poor within the surroundings. Organize shows and other free leisure activities for the poor community members in the vicinity.

4) Be friendly and kind to the poor people who push trolleys, watch our cars, and collect litter around the malls and wipe our windscreens when we stop at traffic circles and robots. However, this should be done with a lot of prudence.

5) Identify with the people and involve them in the projects and developments of the area.

6) Smile and look at the beggars and windscreen cleaners on the traffic circles and stops; they have names, ask them and use them where possible! Give them something, a coin, note, bread, fruit, when you can and wherever you can. Every time you leave a store, your trolley full to the brim with supplies, remember there are many eyes that may be looking at you and your supplies jealously, hungrily and angrily. The eyes may be of the car guard who pushes your trolley, the person sitting on the corridor eating Magwinya for lunch, or a group of young unemployed men roasting in the midday sun sharing a cigarette while pondering their next move.

7) When the worst happens and the “looters” resurface, negotiate with them (something that may not happen): it’s better to allow them to loot the basics insofar as they don’t destroy or burn the buildings.
Fr. Ndungu Robert Kinena