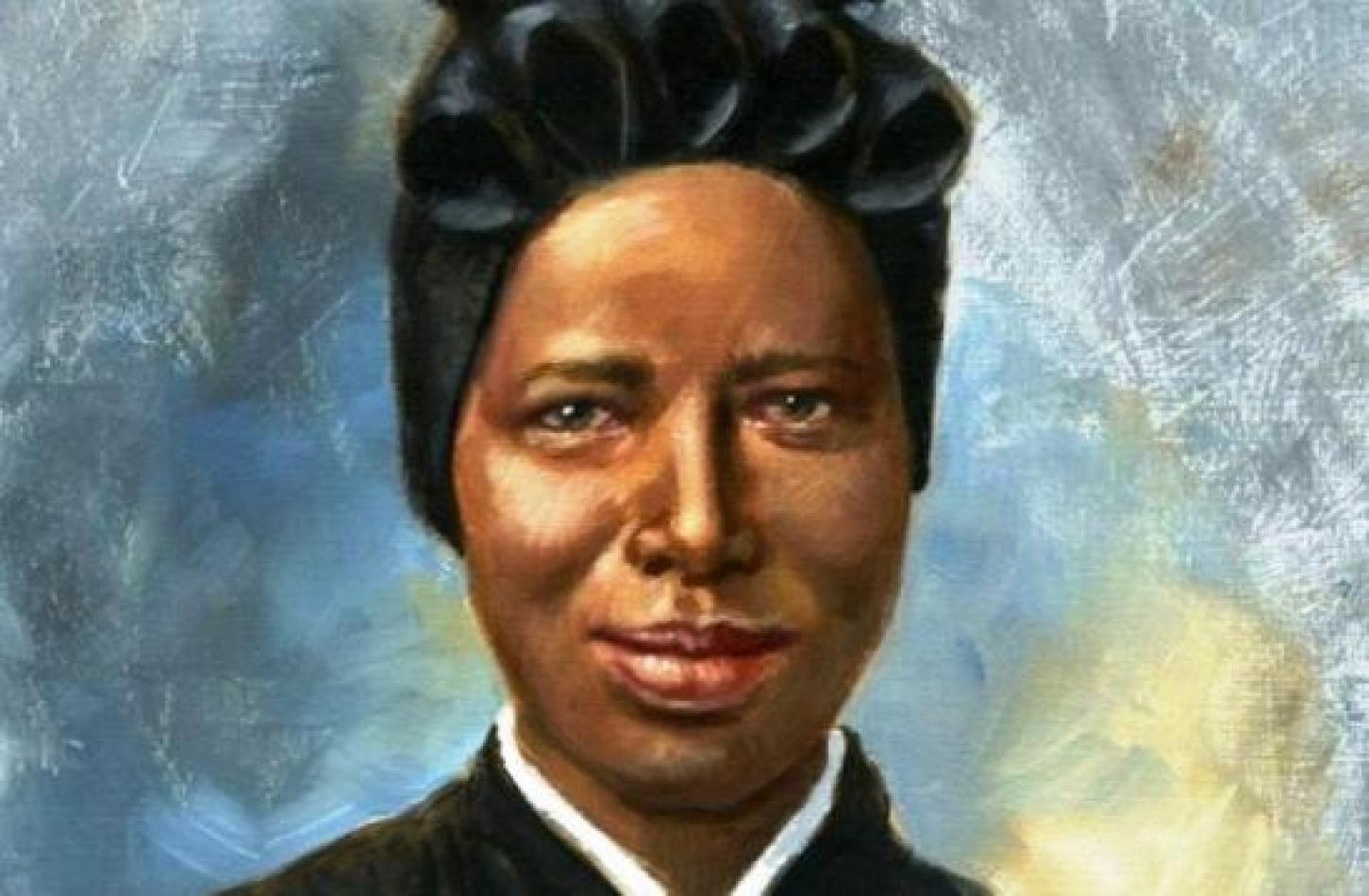 Friday, June 28, 2019
Nine-year-old Bakhita (c. 1869-1947), playing in the fields near her home in Sudan, was captured by slave traders. She had been warned by her parents to be careful, since her older sister earlier had been captured and enslaved. At the cathedral in El Obeid, Sudan, a painting of Bakhita hangs next to that of the Blessed Mother, the Queen of Africa.

During the next ten years, the captive Bakhita passed through the hands of five different slave owners. When the first slavers captured her, she kept silent when they asked her name. In response, they named her Bakhita, which means “the lucky one.” And she was lucky. She and another young girl escaped from these slavers. They ran into the woods and found freedom until a lion cornered them. The pair climbed a tree and proved more patient than the beast below. The girls’ newfound freedom, however, was short-lived. Another slave trader discovered the wandering girls and took his booty to the slave market at El Obeid. The slaver decided, however, to keep Bakhita to serve as his daughter’s maid.

The situation was not altogether unpleasant until one day Bakhita accidentally broke a prized vase belonging to the slaver’s son. Enraged, the son demanded that the father rid the family of Bakhita. Her third owner was a Turkish military officer and his family. The women of the house mistreated Bakhita terribly, regularly beating her for no reason and tattooing her with a needle to satisfy their whim of fashion. Fortunately, this situation ended when the owner and family sold his slaves at Khartoum, from where he returned to Turkey on temporary leave.

The next person to purchase the teenager was the diplomatic vice-consul for Italy at Khartoum. The man treated her kindly and tried to relocate her with her parents. Bakhita, however, could not recall where her parents lived. When the search for her origins turned up empty, the diplomat brought Bakhita to his home at Genoa. A family friend, Signora Michieli, and her young daughter, Mimmina, grew fond of Bakhita. It was agreed that this family would become the new owner of the slave girl, who by now was fourteen.

Signora Michieli loved Bakhita and treated her well. Since the signora’s wealthy family owned a hotel located near the Red Sea, it was envisioned that Bakhita eventually would travel with the family and work at the hotel as a waitress. In the meantime, the Sudanese girl was kept busy as a servant for the family’s daughter.

At twenty, Bakhita prepared to leave the home at Genoa for the Red Sea hotel. Just before leaving, the family steward suggested that Bakhita ought to be instructed in the Catholic faith, and, if she wished, to be baptized. Bakhita and Mimmina took up residence at Venice in the convent of the Daughters of Charity of Canossa. From the first moment she entered the convent, Bakhita felt at home. She loved the peace and prayerfulness of the convent.

Ten months later, Signora Michieli reappeared at the door of the convent. Gently but firmly, Bakhita refused to leave. Signora insisted that Bakhita must leave, since the woman had purchased the young girl as a slave and slaves were the property of their owners. The mother superior perceived the impasse. Because Church law was involved, she called in the cardinal-patriarch, who, because civil law applied as well, called in the king’s procurator.

These two officials of Church and State deliberated Bakhita’s future. When they asked Bakhita to state her position, she replied, “I love the Signora dearly, and to part from Mimmina cuts me to the heart. But I shall not leave this place because I cannot risk losing God.” The cardinal and procurator arrived at the same decision: since slavery had been declared illegal in Italy almost a hundred years before, as soon as any foreign slave touched Italian soil, he or she immediately and automatically became freed.

Within weeks, the cardinal baptized twenty-year-old Bakhita into the Catholic Church. She rejoiced in God’s love for her. Feeling loved and called by God, Bakhita expressed her desire to become a nun in the religious community of the sisters. The mother superior replied that Bakhita would be most welcomed.

On December 8, 1896, she took vows of poverty, chastity, and obedience. She spent the next fifty years serving God and others in the local community houses of the Daughters of Charity of Canossa: at Venice, as portress at the Catechumenate Institute; at Schio, as cook and later as portress in the school and orphanage for girls; up and down the Italian peninsula as fund-raiser for the foreign missions. She was given the affectionate title Madre Moretta, which means “the Black Mother.”

The sanctity of Bakhita was nothing extraordinary: it was not showy, but it shone through her whole life. It consisted of very down-to-earth wisdom. She had the proper word for all: for the soldiers whom she invited very clearly to go “to confess [their sins]” and for the seminarians to whom she recommended holiness.

For the women who lingered around gossiping, she advised: “Go home quickly to prepare the meal, otherwise your husband will get impatient.” Everyone, both great and small, was touched by her. When she went around to promote missionary vocations, she was accompanied by a Sister who did the talks.

However, everyone was drawn toward Bakhita, who, going up on the platform, with few words, would manage to touch the hearts of all: “Be good, love the Lord, pray for those who do not know Him still!” Then she would make the sign of the cross and quickly go away.

At the cathedral in El Obeid, Sudan, a painting of Bakhita hangs next to that of the Blessed Mother, the Queen of Africa. (Vincent J.O’Malley)
Comboni Missionaries