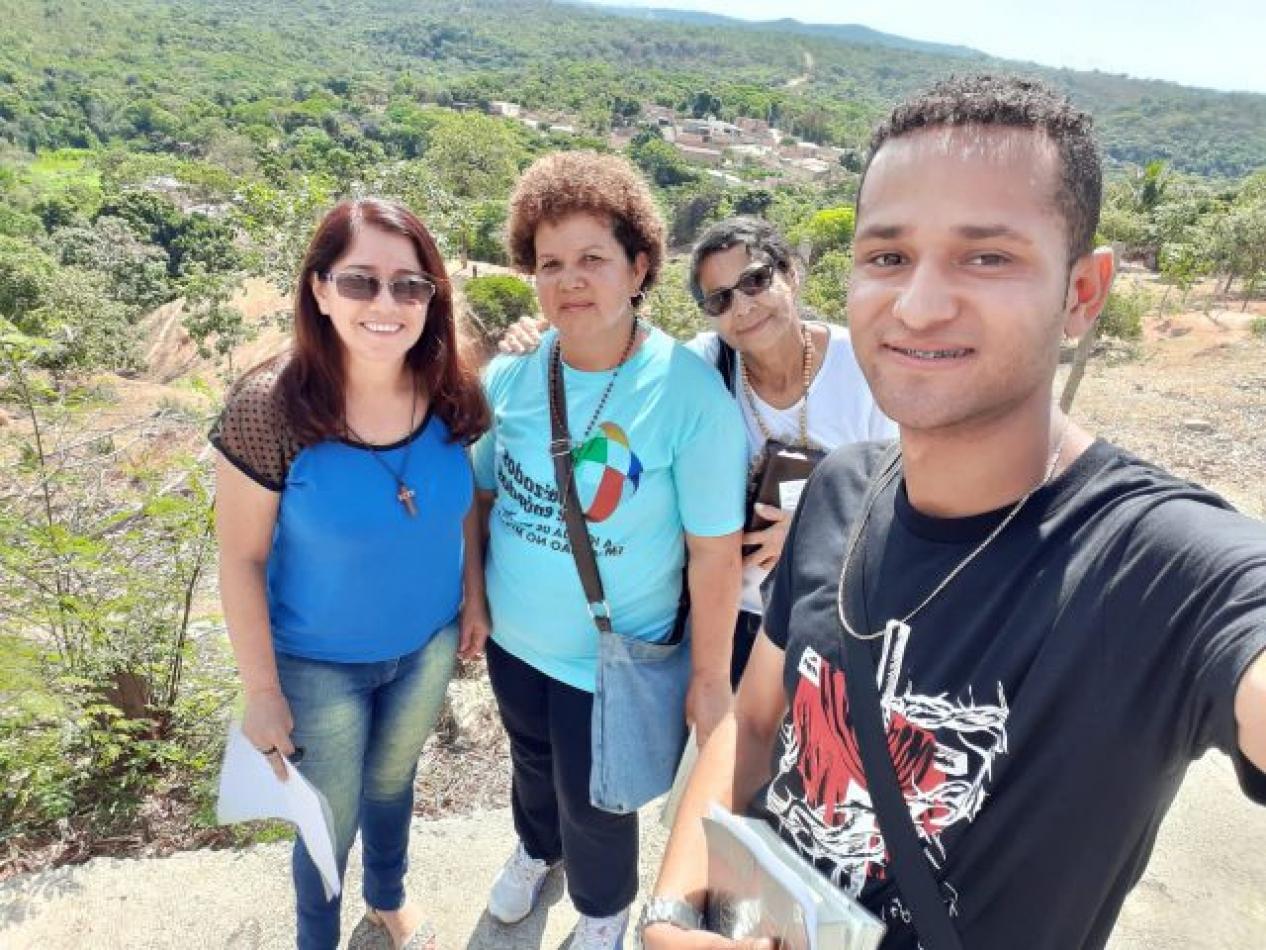 Monday, May 18, 2020
We wish to share with you a little of what we, Regimar and Valmir, Comboni Lay Missionaries, are living during this time of preparation for the mission. We should already be in the mission of Mozambique, in Africa, but due to the coronavirus pandemic, the governments have closed the borders and we have not yet been able to leave for the mission. We are still in the house of formation and mission of the Comboni Lay Missionaries in Contagem/MG, in Brazil. 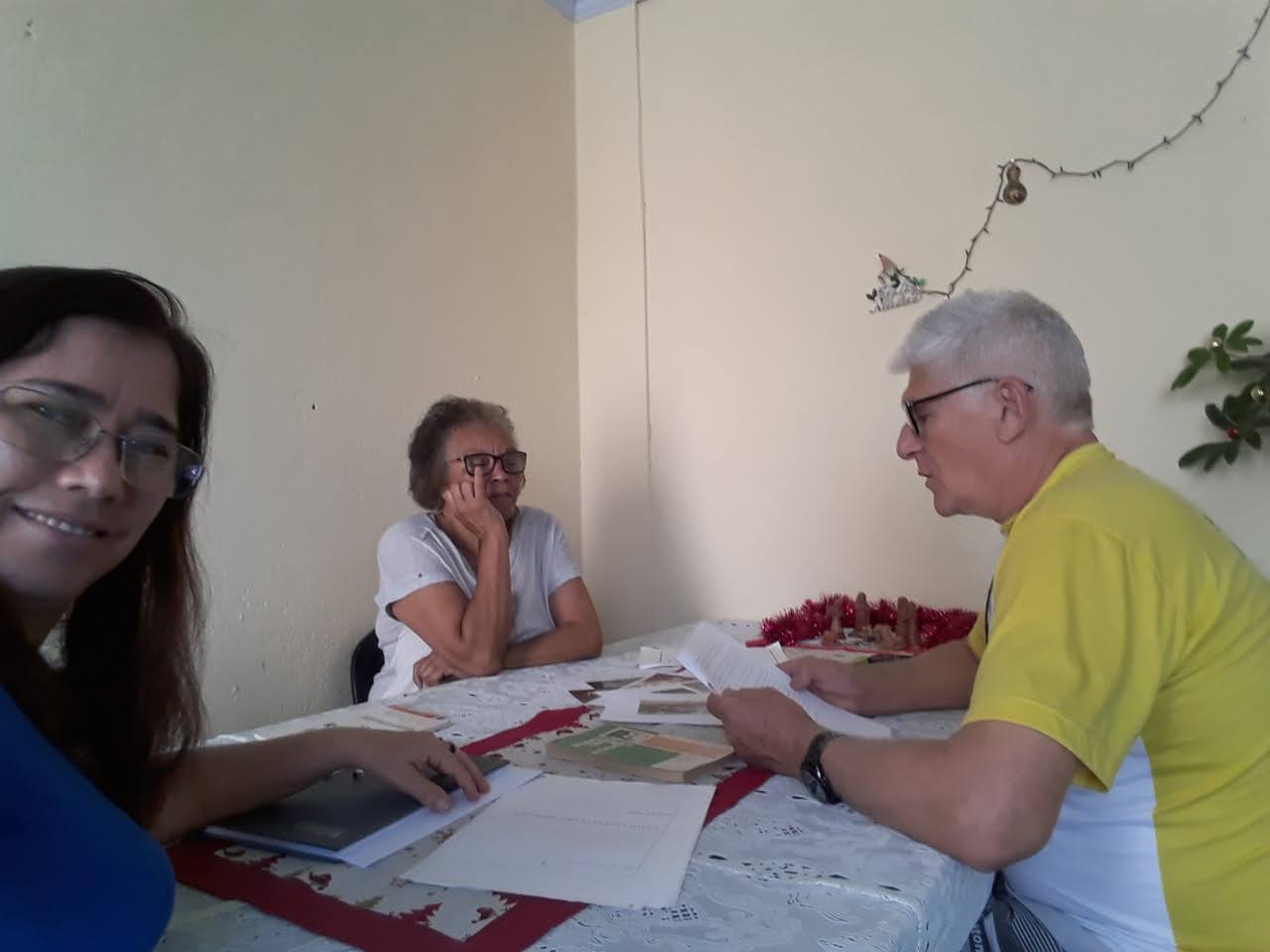 Dear friends, peace and good!
We wish to share with you a little of what we, Regimar and Valmir, Comboni Lay Missionaries, are living during this time of preparation for the mission. We should already be in the mission of Mozambique, in Africa, but due to the coronavirus pandemic, the governments have closed the borders and we have not yet been able to leave for the mission. We are still in the house of formation and mission of the Comboni Lay Missionaries in Contagem/MG.

Before the coronavirus crisis, besides the formation we received here in the formation house of Ipê Amarelo in Contagem, we also went to Brasilia to do a course for missionaries going to other countries, mission beyond our borders. After that we went to São Paulo where we did another course. These two courses offered us the dimension of what it means to be a missionary in another country.

The Ad Gentes course at the Missionary Cultural Center in Brasilia took 26 days and helped us to interiorize, to look inside ourselves. It also helped us to get to know a little of the place where we were assigned as missionaries. We say with certainty that the course makes us think and rethink if that is what we want, if we want to continue on the path of mission in another country or stay where we are, because the formators of the course make it very clear the difficulties we will undoubtedly face and other difficulties that may arise.

In the second course in São Paulo on spirituality in the cities, which lasted eight days, we were transported to a world beyond our own already known world where we were taken to meet people with a very different faith and way of being: from other religions, sects, atheists, of different sexual orientation, people who never go to church, but who dedicate themselves to love their neighbour to the point of giving themselves to the other, of spending nights on the streets to defend the most needy and persecuted (homeless people).

It was a meeting in which more than just listening to something, we had contact with many concrete realities, in which we made friends that we will carry in our hearts wherever we go. These courses were very important for us, of immense richness. After the courses we went to Paraná and Santa Catarina. There we took part in the community councils, in the meetings with the lay Salvatorians, in the meetings with the GEC (Comboni Spirituality Group) of Curitiba, with the Comboni Fathers and we participated in the celebrations and Masses, always doing missionary animation and speaking of the Comboni charism. 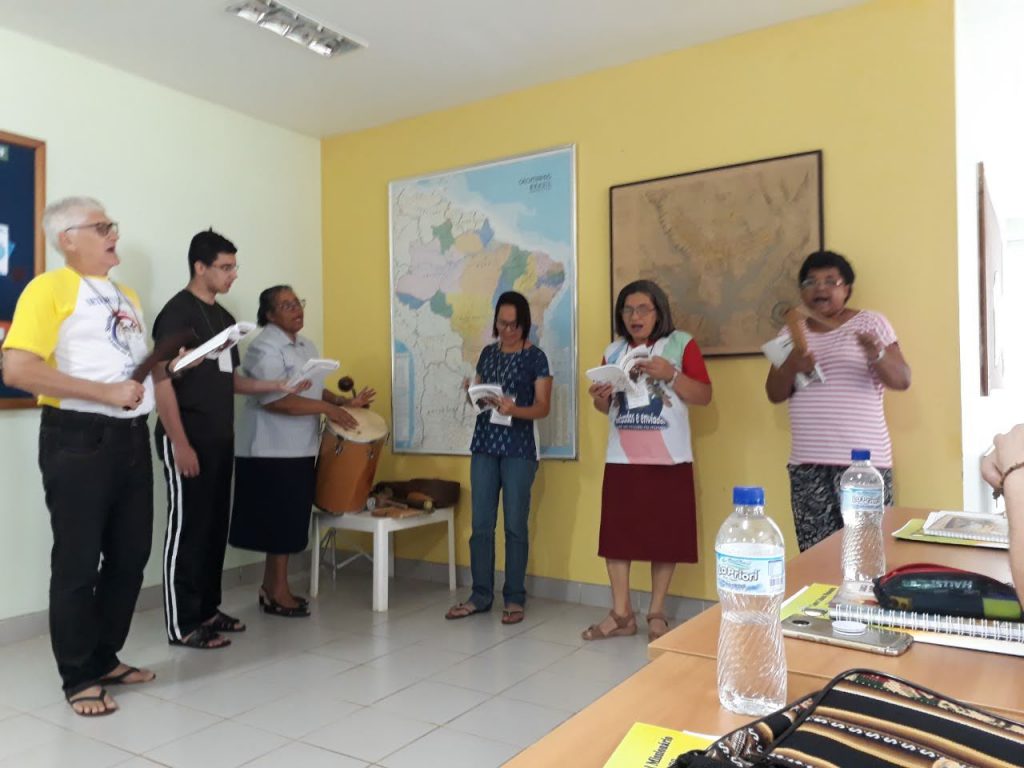 On our return to the community of Ipê Amarelo, Contagem/MG, we continued our formation, always helping out in the community and in the work groups. Valmir, also known as Tito, started the training course for agents of APAC (Association for the Protection and Assistance of Convicts) and I formed a children’s choir in the community. Now everything has stopped because of the pandemic and the quarantine.

For the time being, with the pastoral work stopped, we have created a new routine. Here we are five adults and four children of the Comboni Lay Missionaries couple from Guatemala who came to Brazil as a missionary family and live here in the Comboni Lay Missionaries’ house of formation and mission. We have morning prayer, as always, and then continue formation. In the afternoon there is free time for rest, then reading and a little physical exercise. We leave Thursdays free for recreation; it is the day we play most with the children, they love it. That’s a bit of what we do here in the house.

There are also times to help people, either by talking on the phone or on WhatsApp, or by donating some food or other ways that are possible, because people come to us and we can’t stop taking care of them, taking the necessary care. And so we are living these days of quarantine, asking God that this crisis will soon pass and we can return to normalcy and finally go on mission.

We would like, in addition to sharing, to thank you for your affection and your prayers. Be assured that this will strengthen us greatly and encourage us to continue. Thank you very much also for the financial help sent by the GEC of São Luís and Timón. It is very valuable for us to count on your contribution. Thank you very much, may Jesus the Missionary and St. Daniel Comboni continue to bless you all.

Finally, we wish to say that we are united in prayer and love. Let us pray to God that this crisis of the coronavirus may soon pass and we may continue our lives in another normality. Let us pray for the families who have lost their loved ones, for all the sick and for each one of us.

Hugs to all and light in our hearts.
Regimar and Tito (Valmir), Comboni Lay Missionaries (CLM)

Our experience as CML in Colombia
during this quarantine

Dear Comboni Lay Missionaries
The year 2020 began with our presence as Comboni Lay Missionaries of Colombia in the neighbourhood of El Oasis, on the eastern outskirts of the municipality of Soacha, near the city of Bogotá. The Comboni priest Franco Nascimbene has been working there for five years and we are now sharing our experience of immersion with him. During this time, as a team, we have been thinking of ways to accompany all those affected by the current situation of COVID-19.

At the beginning of the quarantine we asked ourselves about the meaning of our presence in the middle of the community, since given the indications of the government we all had to be at home, temporarily suspending the pastoral activities planned for the year (catechesis, afro choir, eco environmental project and afro group).

Especially since we are in a neighborhood where the majority of the inhabitants depend on informal work and which is made up of minorities such as migrants (mostly Venezuelans) and those displaced by the violence of the departments of the Colombian Pacific. Although the incidence in terms of health has been minimal for the inhabitants of the neighborhood meanwhile there are no reported positive cases of people from the sector, the social and economic impact has brought an increase in the situation of poverty and in the guarantee of basic rights such as food, housing, health, recreation and education among others. When analyzing this reality as a team, we observe that the presence of the state continues to be minimal, and the food aid that has arrived in the neighborhood is not enough to supply basic food for the families.

Facing this reality, the following significant experiences have arisen and we would like to share with you, full of great joy:

Community prayer in the stable: During the first week of quarantine, during the prayer of the Comboni Missionaries’ team, the idea arose to share moments of prayer that would allow the people of the stable to generate more solidarity and hope. This idea was shared with neighbors from another church (evangelicals) who live on the same street and who joined the initiative. From the second week of quarantine onwards, this idea was born:

This experience, which we continue to live, has allowed us to get to know our neighbors, since for reasons of study or work, it was not possible for us to share these spiritual and community moments. In addition, two people have committed themselves to prepare the prayer every week, and from the second week onwards, a sound system and microphone are loaned out, with the participation of people from other streets. The most important thing is that from this community act, solidarity is experienced among the people who contribute with some of their food to benefit two families who need it every week.

Solidarity sharing: at the same time that we were asking ourselves as a team about creative ways to help our neighbors, we unexpectedly began to receive messages from people close to us, such as friends or relatives who, from Bogotá, were concerned about the situation in the suburbs. Then it occurred that we become bridges that would allow economic aid to reach them.

The first two weeks we went to the nearby supermarkets to buy supplies to help some previously known families. From there we focused on the people who would benefit from this aid with the collaboration of some Afro leaders with whom we had been working. We thought about the afro population that as a consequence of the quarantine have been left without jobs. That is how one afternoon we shared around 40 markets among our black brothers of the sector. Markets have also been shared with migrants, older adults, recyclers and mothers who are heads of households.

The tenderness of the poor: In Father Franco’s house, a table was set where each person could take 3 foods that they needed or leave something that they wanted to share. From this initiative, many small gestures of solidarity emerged, where those who had something else shared it with someone who needed it more, for example: 5 eggs, a pound of tomatoes, a package of rice. People who got help shared part of what they received with those who had more difficulty than them.  Currently, Father Franco spends his afternoons visiting different families in their homes to get to know their reality. In this exercise, he has met people who, having enough, have invited him to share with others who really need it.

As a team, we have been part of this experience of cooperation, we have experienced the joy of receiving food from people close to us, many times we have given what was due to us by emptying our hands but seeing how this giving multiplied into a new receiving.

Now we find ourselves thinking about how to support the academic process of the children, since with the strategy of distance education those who do not have an internet connection and the economic possibilities to pay for the copies they require, have been excluded.