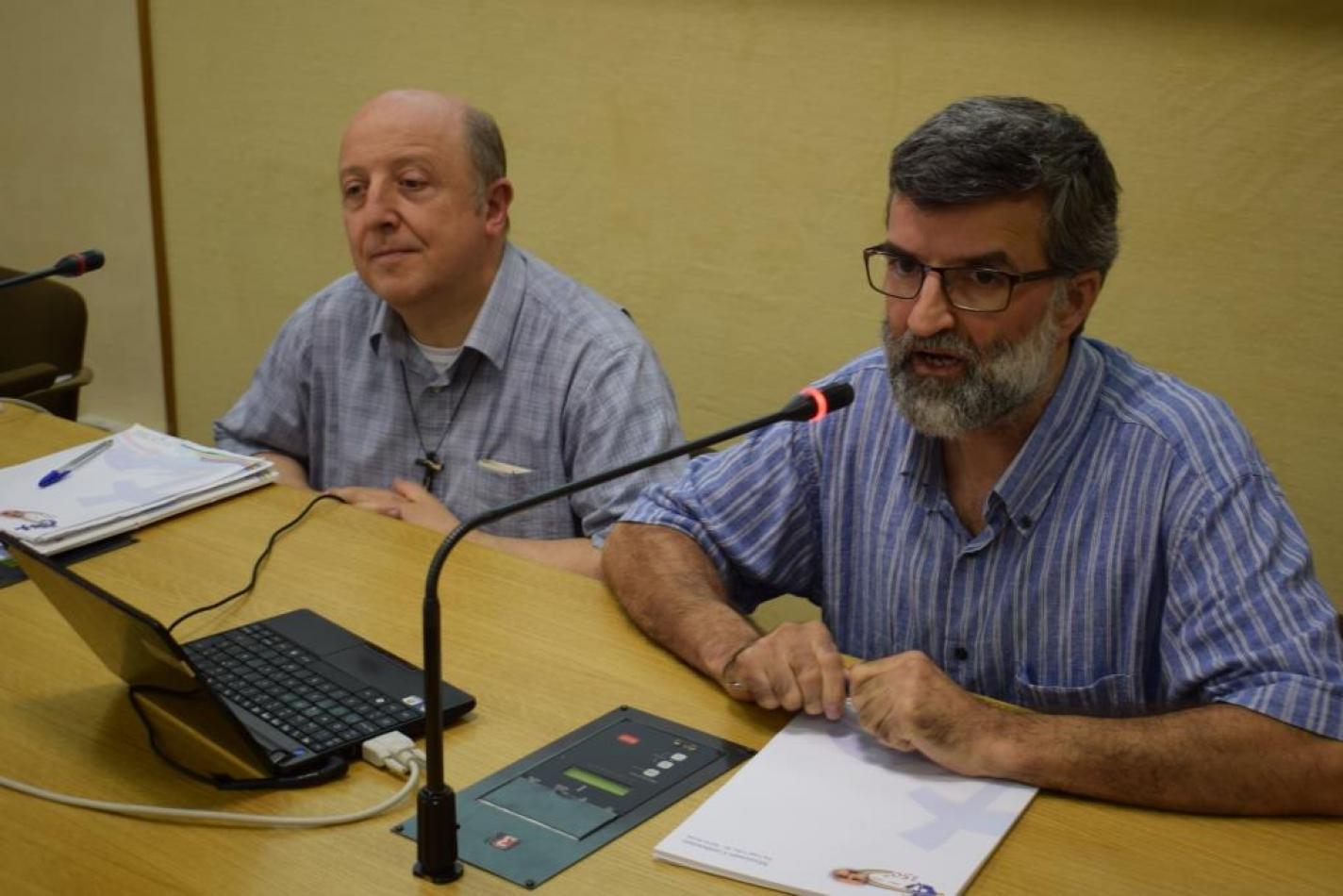 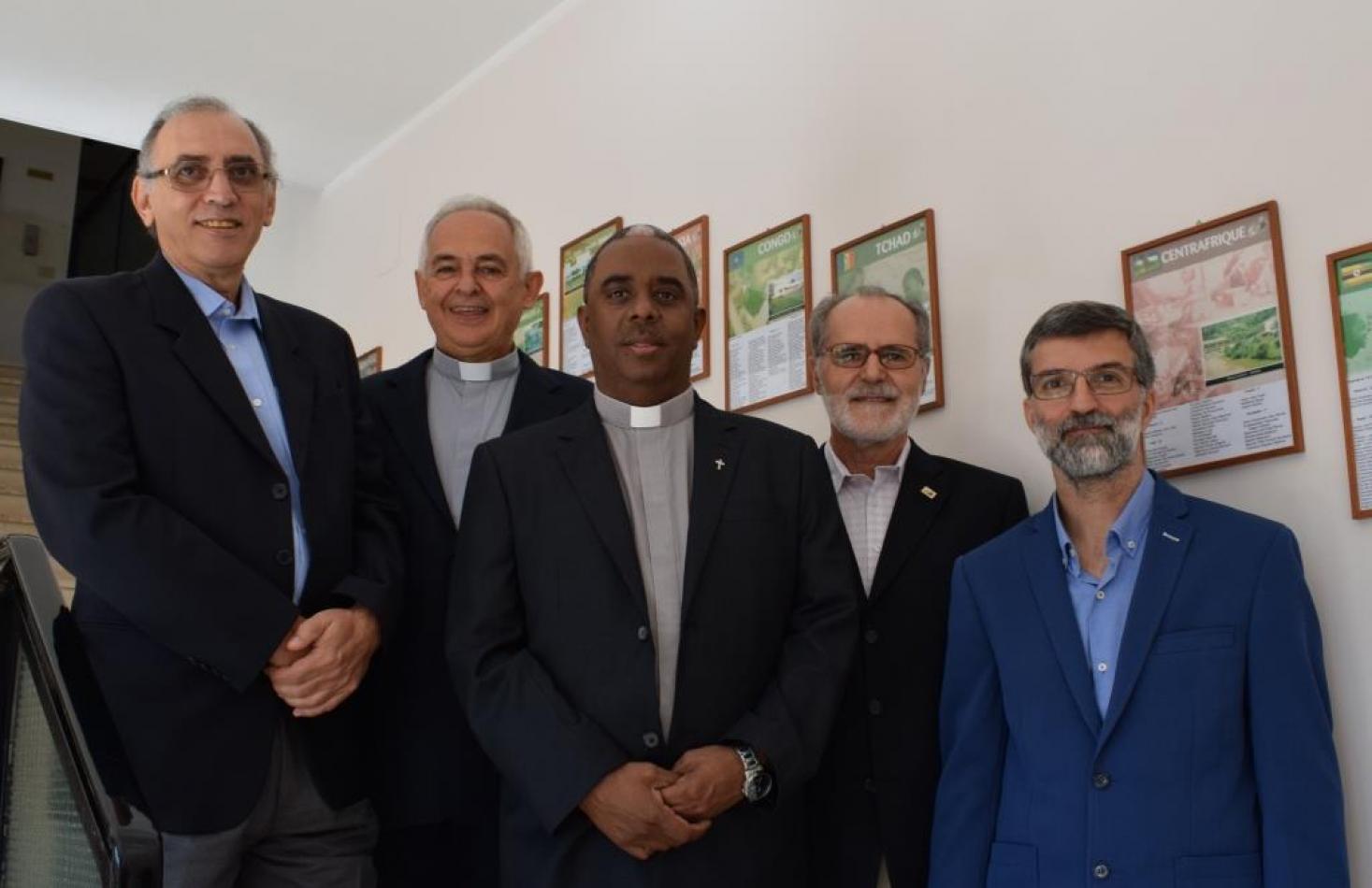 Letter to convene the Intercapitular Assembly 2018 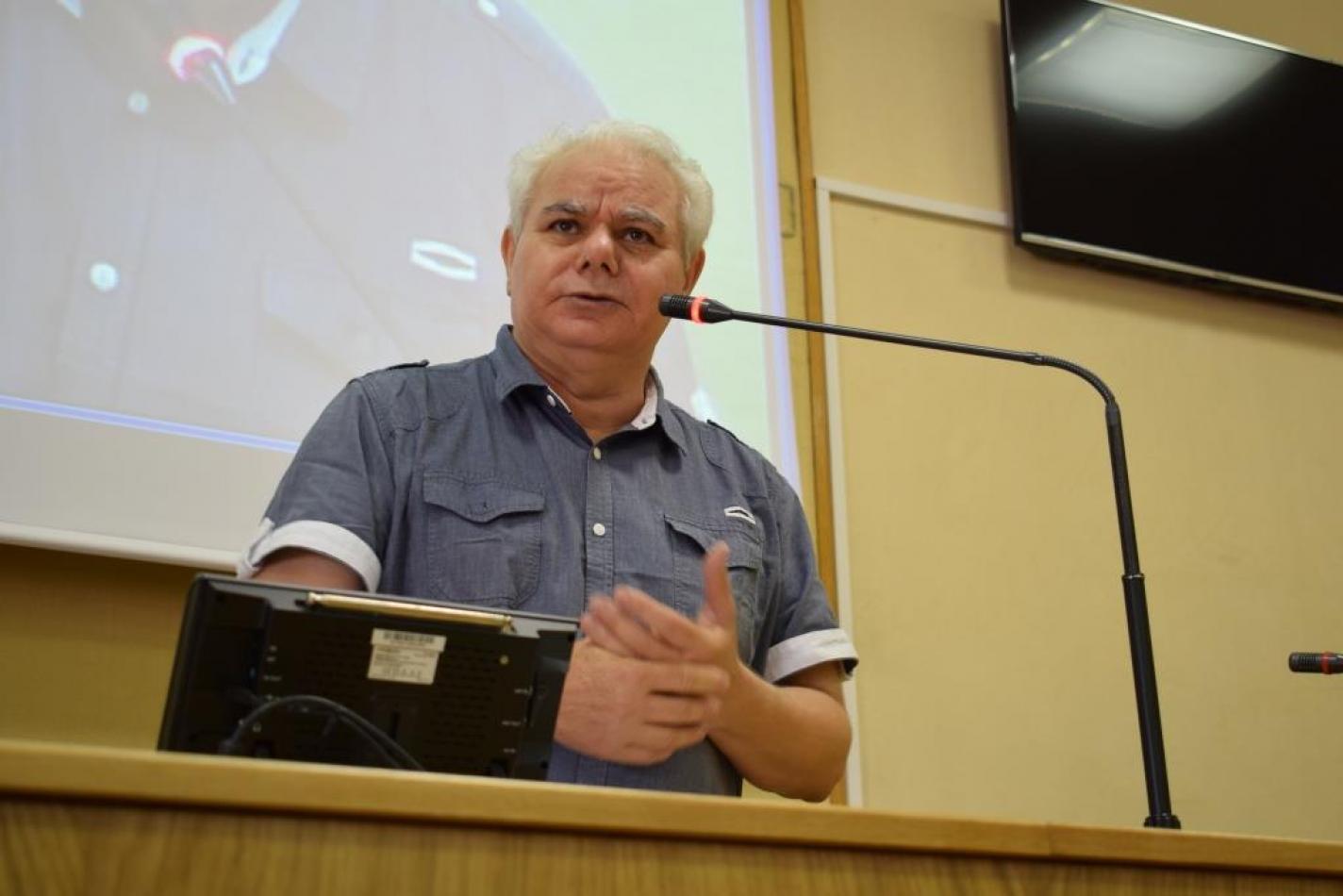 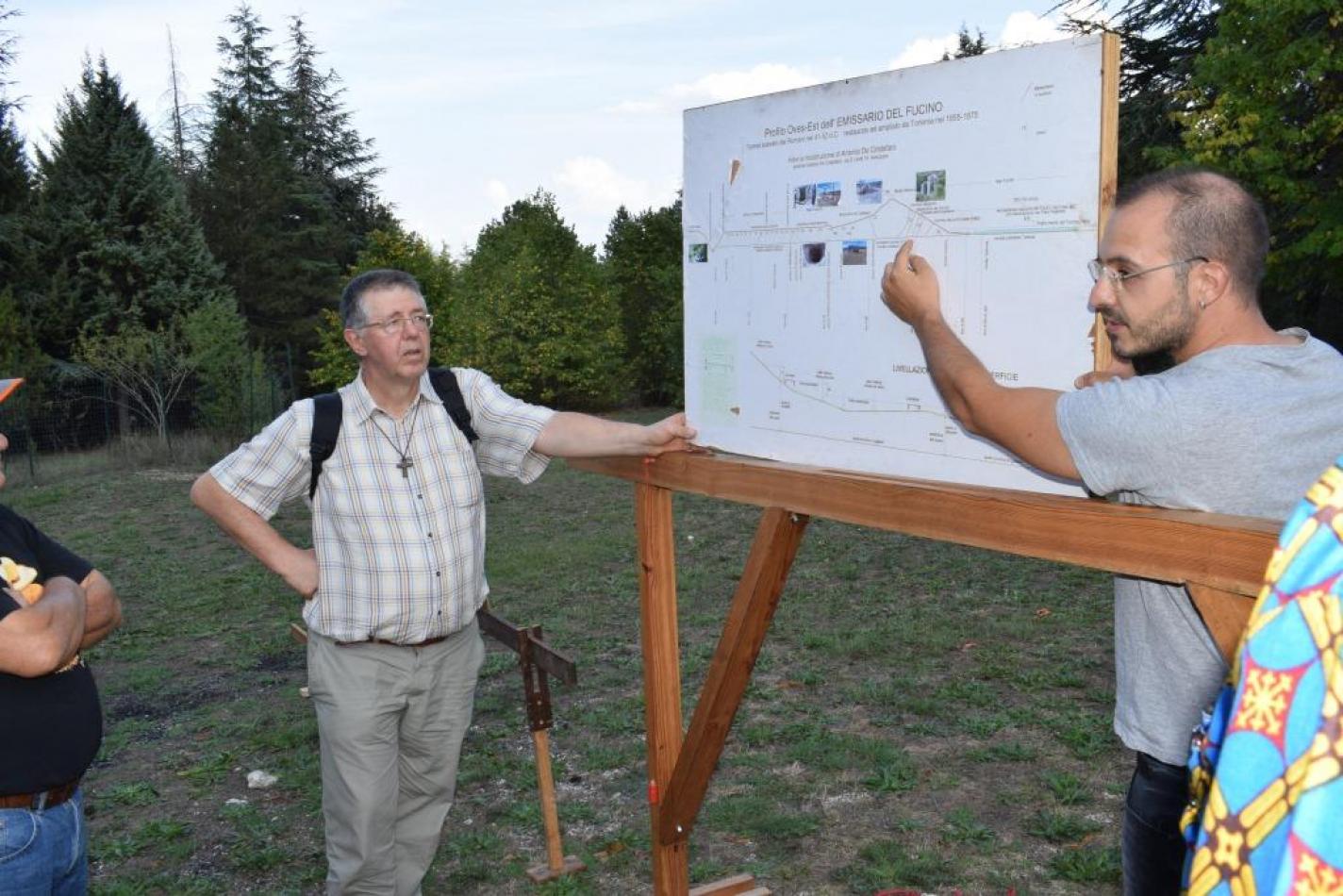 Saturday, October 13, 2018
“In the various continents, as Brothers, we are engaged in the formation of leaders, in the accompaniment of communities in working-class neighbourhoods, in activities of Justice and Peace, in the mass media, in the world of health and education, in the accompaniment of Afro-descendants, in works and infrastructures that are invaluable for the common good. All these areas of our ministry help us to enter into the new paradigm of mission on which the Chapter insists (AC2015 n. 12). Of course, many other types of services (administration, formation, animation, maintenance, etc.) that guarantee the life of our Institute and our mission continue to be valid and appreciated.” In the picture from the left: Bro Alberto Degan and Bro Alberto Lamana, Assistant General.

Dear Brothers,
The four Brothers elected as reference for their respective (sub)continents and the Brother Assistant General have gathered in Rome. We thought of sending you this brief message to thank God once again for the beauty of our missionary vocation.

It seems important to us that, after the decision of the Chapter to elect a Brother as reference to each (sub)continent (AC2015 n.71), these Brothers should be able to participate in the continental meetings of the provincials and in the Intercapitular Assembly according to an officially recognized practice.

We know that within our Institute the Brothers are a small minority: at the moment we are 221, a figure that corresponds to 14.4% of the members of our Congregation. As for our average age, it is 63 years old, above the average age of the Institute (59). In what regards to formation, we have 23 Brothers with temporary vows, 15 of whom are in the CIFs of Nairobi and Bogota. Compared to the scholastics, represent 12% of all those that are in the final stage of basic formation.

Taking these data into account, we can predict that - at least for some years - the number of Comboni Brothers will further decrease. However, in spite of these data, a great deal of hope prevails in us. First of all, it is right to point out that in recent years there has been an increase in the Brothers' vocations, and this has allowed us to keep the two CIFs open, both with a significant number of Brothers in formation. Secondly, the reality of today is characterized by a continuous increasing of forms of poverty, structural injustice and by the disintegration of the community fabric. All this challenges our vocation in a special way and broadens the areas of our mission. In the face of the globalization of indifference and an economy which, instead of producing life, kills (EG n.50), the thirst for fraternity, community and justice is growing on all continents, and new spaces for action are opened for the Comboni Brothers as builders of relationships and promoters of community.

In particular, there are several signs of how the Spirit is promoting the vocation and role of the Comboni Brother. For example, in Europe in recent years, candidates for postulancy and novitiate are mainly Brothers. Many young Europeans rediscover the beauty and the desire for a fraternal life and solidarity, and this invites us to a significant presence that stimulates a human and vocational dialogue. The European provinces are beginning a journey to give life to a Comboni Work of Human Promotion in Europe, a project that will open new spaces for the ministry of the Brother on the continent.

In Africa we are witnessing a real rebirth of the Brother's vocation, especially in Congo, South Sudan and Mozambique. This is a sign of a growing interest in our vocation. The new challenges of the mission in Africa (youth, education, unemployment, etc.) offer great opportunities for the Brothers to exercise various ministries proper to our vocation.

In the American continent we have candidate Brothers in the different stages of basic formation. The reality is characterized by growing inequality and invites us to create spaces of humanity and fraternity that people are increasingly thirsty for. In this perspective, a significant number of Brothers are engaged in specific ministries, such as the Pastoral Afro and JPIC, areas that make visible the specificity of our vocation.

All this leads us to say that this is indeed the time of the Brother, and we are called to collaborate in the project of the Kingdom of justice and fraternity with renewed faith and hope. Certainly, the world has changed a great deal in recent decades, but even today we are called to respond to the cry of the poorest and most abandoned by witnessing to the Gospel, and we try to do it, above all, through a renewed ministerial practice.

In the various continents, as Brothers, we are engaged in the formation of leaders, in the accompaniment of communities in working-class neighbourhoods, in activities of Justice and Peace, in the mass media, in the world of health and education, in the accompaniment of Afro-descendants, in works and infrastructures that are invaluable for the common good. All these areas of our ministry help us to enter into the new paradigm of mission on which the Chapter insists (AC2015 n. 12). Of course, many other types of services (administration, formation, animation, maintenance, etc.) that guarantee the life of our Institute and our mission continue to be valid and appreciated.

In this perspective, our formation is called to prepare the Brothers for the new challenges of mission. For this reason, the CIF seeks to give a ministerial formation that will help to make a reading of reality in the light of the Gospel, and to accompany processes of liberation at the frontiers of the Church and society. In this commitment the Brother is sustained by a profound spirituality that leads him to recognize the presence of Jesus in the crucified of history.

We are very grateful for the journey outlined by our older Brothers who have left us the legacy of a mission lived with passion and a solid faith. We also remember those who have already entered the House of the Father and are united with us in prayer; we thank them from the bottom our hearts because we are aware that they have set up the foundations on which we stand and keep on building today.

We reiterate that the fact that there are few Brothers should not lead us to pessimism, but rather, helps us to focus on what is essential in our vocation. Being small can also be an opportunity to humbly recognize that we alone are not able to carry out our projects. God is inviting us to collaborate more and more and to create networks with other actors, who are also engaged in the journey towards the Kingdom. This is what we try to do, for example, through the Comboni Works of Human Promotion (OCPU), spaces of collaboration with the laity, and whose missionary importance was reaffirmed by the last Chapter (AC2015 n.45.7).

With regard to the implementation of n.53 of the Chapter Acts (which calls on the Holy See to change from a clerical Institute to a mixed Institute), during the Intercapitular Assembly we were informed that our request, along with that of other Institutes, was forwarded to the Holy See through the USG (Union of Superiors General). At the moment we are waiting for a response from the competent bodies.

In conclusion, let us pray to the Lord that, through the intercession of Saint Daniel Comboni, keeps alive in us the passion for the Gospel of brotherhood, certain that this is what the world of today needs more than ever. And let us ask Jesus that this passion be able to inspire so many young people called to collaborate in His project of humanizing the world.