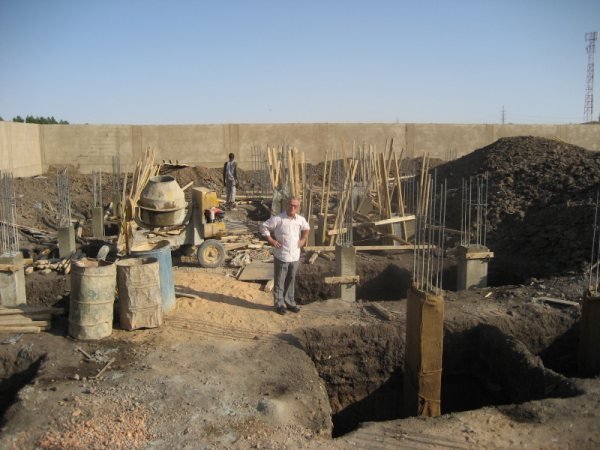 by fr. Pacifico Salvatore
Finally, after 2 years struggle, work has really started this time and for two months things have been moving positively. We hope that by August 2010 eight classrooms will be ready. I am sending the photos taken today that show the excavation for the foundations and the future pillars starting to emerge. Thanks to all the benefactors that have helped and continue to do so.
Khartoum: update 25th January 2010.

Particular situation in the area
Izba is a large popular area in the outskirts of Khartoum North, at the border of the Industrial Area. People still live in houses made of sun-burnt bricks. The population is mostly made of people displaced from Southern Sudan, Nuba Mountains and Darfur, who ran to Khartoum to escape from war, starting from the seventy, and increasing year after year.
The Catholic Parish of Khartoum North to answer the needs of these displaced families in the year 1986 opened a school built with poor material such as bamboo reeds, tin-walls and zincs to cover the classes. The number of pupils increased, and one time it reached 1300 pupils. At present the school has about 700 students in 16 classes, from grade 1 to grade 8. The number decreased when the Church built another basic school in Sammarab which at present has about 500 students. The land was not propriety of the Church. The school has been used also as a place of worship for the community of the area. The attendance to Sunday Mass is between three hundred and five hundred people.

Obstacles
About ten years ago the area was surveyed by the authority and the place now occupied by the school (about 800 square meters) was declared a “dwelling place zone”. It was divided into four plots with a road passing through. The Ministry said that the school had to be transferred to a zone reserved for social services.
The Government three years ago offered a piece of land 6.300 square meters at the cost of 756.000.00 Sudanese Pounds (378.000 US Dollars). In May this year the Government accepted to reduce the cost to 550.0000 Sudanese Pounds (275.000 USD). To avoid loosing the occasion we paid the money putting together all our resources and cutting other projects. In addition we spent 25.000 USD to get the documents and 70.000 USD to build a wall all around and prevent squatters from invading the property.

What next
Now that we have the land, we have to build the school: the cost of the school itself will be 550.000 USD: the project foresees the construction of 16 classes plus offices, the library, a hall for meetings, WC. Since I became provincial superior of the Comboni Missionaries in Khartoum, the school of Ezba has been one of my preoccupations. I am confident that we shall not let the children of Ezba down. In March I spent a couple of weeks in Italy and I was given 7500 Euro by friends and relatives. In August I was in the States and I came back with 18.000 USD. A couple of institutions have promised more substantial help. Other small offerings are arriving. I must say that many friends have taken at heart the project. I am confident that in a couple of years the school of Ezba will be a reality. God bless you.

Fr. Salvatore in the ground of school, in one class-room, guiding the morning prayer