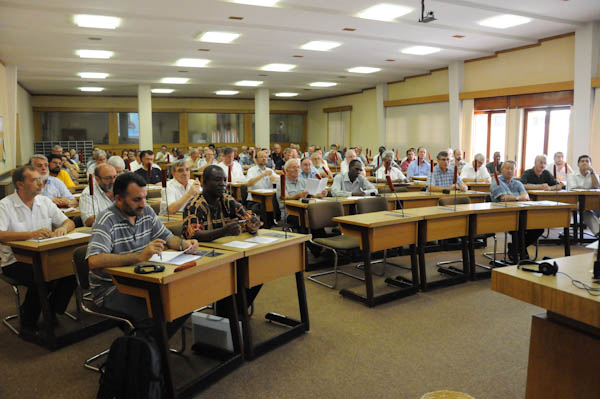 The “machine” of the XVII General Chapter is in motion and ready to start off on 6th September 2009, when the Chapter will be officially opened at the presence of Cardinal Ivan Dias, Prefect of the Missionary Congregation of Propaganda Fide.

From the 1st to 5th September the 72 delegates and the 11 observers to this “ordinary – special” Chapter, have spent their time in a serious preparation and attentive listening. Four high level non Comboni speakers, the Superior General of the Comboni Sisters and four Comboni missionaries (three ex superior generals, and a recently appointed bishop) have presented with great freedom and competence their vision concerning the demand of mission today and of the Combonians reality.

Fr. Pascual Chávez, Superior General of the Congregation of St John Bosco (Salesians), stressed the importance of “staying” with Jesus and the missionary mandate (Mc 3:13-19); the Superior General of the Jesuits, Fr. Adolfo Nicolás, shared his long experience as missionary in Asia; he talked about the need of reformulating a new theology of Creation and of Salvation, in a listening attitude of and dialogue with the religious pluralism of humanity; Msgr. Augustine Gardin, Secretary General of the Congregation for Consecrated Life insisted on the importance of fraternity in religious life; Sr Adele Brambilla reminded us that we are twins congregations and asked us to keep in mind the feminine dimension of the mission; Fr Marco Recolons, Coordinator for Latin America of the General Council of the Jesuits, gave us a vision of the journey made by religious Life in Latin America with particular reference to the Aparecida document that calls us “to be disciples and missionaries so that our people may have life”; the last to speak was Fr Jean Roger Ndombi, from Congo Brazzaville, and General Councilor of the Jesuits, who presented a list of missionary challenges from the African continent: vocational discernment, the need of collaboration, intercultural and inter-religious dialogue, fidelity to the vows, the situation of misery and expropriation that is touching many people, thus calling the missionaries to be in the world the voice of the voiceless.

On the other hand Msgr. Giuseppe Filippi, new bishop of Kotido (Uganda), helped us to pray and to build up our deeper identity on the experience as peopled loved by God, thus avoiding the superficiality proposed by the world.

The novelty in the week of introduction to the Chapter was the presence of the ex superiors general from 1979, year of the approval of the Rule of Life of the re-united Congregation. They shared freely what they held in their heart for the good of the Institute. Fr Manuel Augusto underlined seven points: to be disciples before being missionaries; the Word as hinge of our mission; authority as Paternity; the person as richness; the local Church as subject of the mission; harmony of the double dimensions: Word and social transformation; responsibility that is holy and capable. Fr David Glenday read a meaningful passage from a letter of Daniel Comboni concerning the Plan and drew our attention to five points. The Plan - he said - was born from the experience and listening, from a global vision of the world, from difficulties and prayer. A meaningful Plan is built on few strategic points. Fr. Francesco Pierli, as “elder”, shared his experience and preoccupations underlining that the Chapter is a human mediation of the action of God that needs adequate human instruments.

At the end of the week of preparation, the delegates who are coming from three continents (12 from Africa, 15, from America and 45 from Europe, and represent 29 provinces and delegations in four continents) have a wide and complex vision like one finding himself in a forest where it is not easy to guess where the light comes from, so it is for us now to get the light that show us the hour of God for the Comboni Missionaries today.