Election of the new General Council of the Comboni missionaries 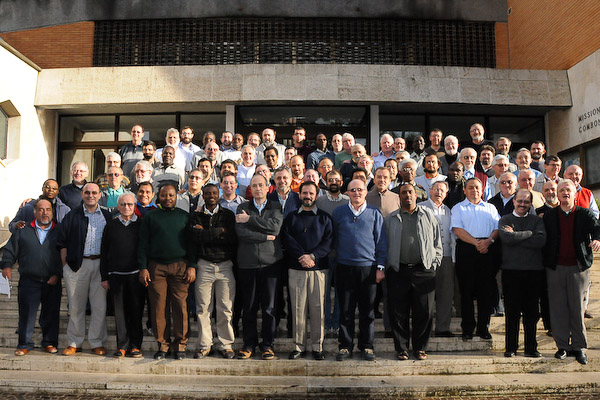 Today, november 22nd, the XVIIth General Chapter of the Comboni missionaries has chosen its four general Assistants who will work with father Enrique Sànchez, newly elected Superior General, to lead the Institute during next six years.

Election of the new General Council of the Comboni missionaries

Today, november 22nd, the XVIIth General Chapter of the Comboni missionaries has chosen its four general Assistants who will work with father Enrique Sànchez, newly elected Superior General, to lead the Institute during next six years. The Assistants general are:

Fr. Odelir Magri, brazilian. Member of the previous General Council, he has been re-elected with a great majority of votes. Fr. Odelir was borne at Chapecò (Brazil) on april 18th 1963. Ordained in 1992, he served as missionary in the Democratic Republic of Congo. He was called back to Brasil in 1997 to work in the field of formation. In the General Chapter of  2003 he has been  nominated Assistant general, a task to which he has now been taking up again.

Br. Daniel Giusti, italian. He was borne at Somma Lombardo (Italy) on may 18th 1952. He took his perpetual vows as a Comboni brother on october 10th 1989. He has taken part to the Chapter as brother delegate for the Uganda Province, where he has been carrying out his missionary service since 1986. At the beginning of the Chapter, br, Giusti was chosen as Secretary of the Chapter itself.

Fr. Tesfaye Tadesse, ethiopian. He was borne at Harrar (Ethiopia) on September 22nd 1969 and was ordained to priesthood on the 10th of October 1995. He sah served up to now as Provincial Superior of Ethiopia. He worked several years as missionary in African muslim countries, first in Egypt and later in Sudan.

Fr. Alberto Pelucchi, italian. He was borne at Brescia (Italy) on November 13th 1954 and ordained priest on june 26th 1981. At present he was Provincial Superior of  Italy, the largest Province of the Institute. After serving seven years for the Institute in the London Province (The Comboni Province of the United Kingdom…) he was assigned to Kenya, where he worked from 1988 to 1998.

The four general Assistants, together with the Superior General, fr. Enrique Sànchez, after the handing over of responsibility from the previous General Council members, will begin their service. The vacatio legis, however, will last until February 1st 2010, to allow for the preparation of the Chapter documents in the various official languages of the Institute. The closing of the Chapter, once the final issues will be accomplished, will be in the evening of Friday October 23rd .