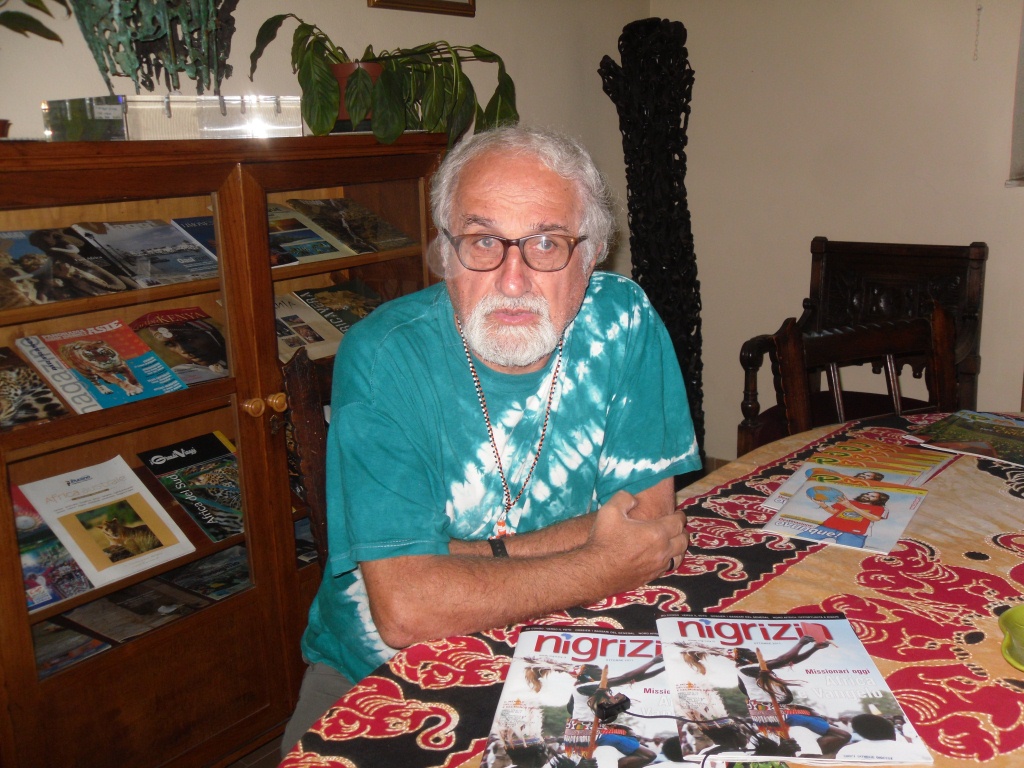 Rome, Wednesday, August 22, 2012
“My real conversion to Jesus of Nazareth came when I decided to go down into the underworld of history in the shanty towns of Korogocho. Twelve years spent in Korogocho profoundly changed the way I read the Scriptures. At Korogocho I understood something very important: the context in which one reads a text is just as important as the text itself. A passage from the Gospel of Mark read in a Roman villa has a much different meaning from the same passage read in a shack in Korogocho.” Fr. Alex Zanotelli.

The letter of the General Council “The Word of God in our missionary being and acting”, reminds all of us Comboni Missionaries of the Centrality of the Word for the mission today. “As missionaries we are people of the Word – as the letter states – people who have encountered it and have accepted the challenge of becoming witnesses, messengers and proclaimers in the whole world”. There can be no mission without this passion for the Word, a living and lived Word. As the letter also says, it is “A Word who became flesh and is called Jesus”. This return to Jesus of Nazareth is fundamental; Jesus in whose face we recognise “the mystery of God who, being unknowable, became intimate with us and close to us”, in the historical experience of Jesus of Nazareth.

“The turning point present-day Christianity needs – writes the Spanish Biblical scholar Pagola, author of the well-known book “Jesus, a historical Approach” – consists simply in returning to Jesus Christ or rather in concentrating with more authenticity and greater fidelity on the person of Jesus and his plan for the Kingdom of God. I believe that this conversion is the most urgent and most important thing that can happen in the Church in coming years”. Only in this way can the Church regain its gusto for the mission while we missionaries rediscover the joy of proclaiming that poor man Jesus of Nazareth, crucified by the Empire but alive by the power of God. This was the great turning point of my missionary life, the conversion to Jesus of Nazareth. It was a long and laboured forty-year search, going from a deep crisis to the joyful discovery of that poor Galilean who shared the lot of his people under the heel of Roman imperialism and paying the price, dying as an agitator against the System. If the Word of God became man in the carpenter from Nazareth, if we believe in the incarnation, then it becomes important for us to know how Jesus acted in that land of his, in that particular historical moment, as the Anglican bishop T. Wright affirms.

Today, this is called ‘the search for the historical Jesus’. This meant a lot to me by way of serious study, reading, research and reflection, but this was not enough. My real conversion to Jesus of Nazareth came when I decided to go down into the underworld of history in the shanty towns of Korogocho. Twelve years spent in Korogocho profoundly changed the way I read the Scriptures. (Each week, as a community, we would dedicate a day to reading one of the Gospels helped by the best Biblical research). At Korogocho I understood something very important: the context in which one reads a text is just as important as the text itself. A passage from the Gospel of Mark read in a Roman villa has a much different meaning from the same passage read in a shack in Korogocho.

I wish also to say that the Magisterium of the Church itself, in its document, “The Interpretation of the Bible in the Church” (1993), states: The entire biblical tradition and, in a particular way, the teaching of Jesus in the Gospels indicates as privileged hearers of the word of God those whom the world considers people of lowly status. Jesus acknowledged that things hidden from the wise and learned have been revealed to the simple (Mt. 11:25). Those who in their powerlessness and lack of human resources find themselves forced to put their trust in God alone and in his justice, who have a capacity for hearing and interpreting the word of God which should be taken into account by the whole Church, it demands a response on the social level as well.”

I have noticed how true this is by living at Korogocho, taking part in the small Christian communities, listening to the Word read by the victims of the System. “The crucified, the impoverished, the marginalized are the face of Christ – writes the French theologian Bruno Chenu. The identification is not general but personalized: each face of the poor is an icon of Christ. The poor thus become those revealing the evil world order, condemned by the reigning injustice…” It was the poor, those suffering from AIDS and the marginalised who proclaimed the Gospel to me. It is they who are the subjects of evangelization!”

This is the heart of the intuition of Jesus Christ: the poor are not to be the objects of charity but the subjects of the Good News! It was at Korogocho that I began to understand how bourgeois, rationalistic, enlightened and schizophrenic was my reading of the Bible. By reading it with the poor I understood that God takes sides. God is not neutral but is firmly aligned. God is the God of the slaves, of the oppressed, of the marginalised. God does not want that there be slaves or oppressed but free people. This compelled me to re-read Scriptures, both the Old and New Testaments. This journey is well expressed in the recent book “Come out my People” by the American Biblical scholar Wes Howard-Brook. My present passion for the Word of God was born of this long, tormented but joyful journey of conversion, first of all to Jesus of Nazareth (“I know Jesus Christ alone and him crucified”) and the crucified of history who enabled me to read the Scriptures with different eyes and, starting with them, to understand the sort of economic-financial System we are living in.

To these two fundamental conversions I must add a third that matured in me as I returned to Italy and worked in the North of the world. I became very much involved in the field of ecology and the environment, both on the local Neapolitan level and also globally. This led me to reflect a lot on the environment, Planet Earth and the Cosmos. The more I reflected, the more I was convinced of the truth of what St Augustine said when he affirmed that the first Bible God gave us was the Cosmos, Planet Earth (God took more than four billion years to prepare it for us!).

Fundamentally, all of us need to regain this first and essential Word of God that must eventually bring us to a profound sense of veneration and respect for all that surrounds us. Only in this way can we emerge from this System of death that kills by hunger and war but also kills the Planet. We missionaries, passionate proclaimers of Jesus of Nazareth, must today respond to the ‘cry of the poor’ and the ‘cry of the Earth’!