JPIC as part of our Comboni mission 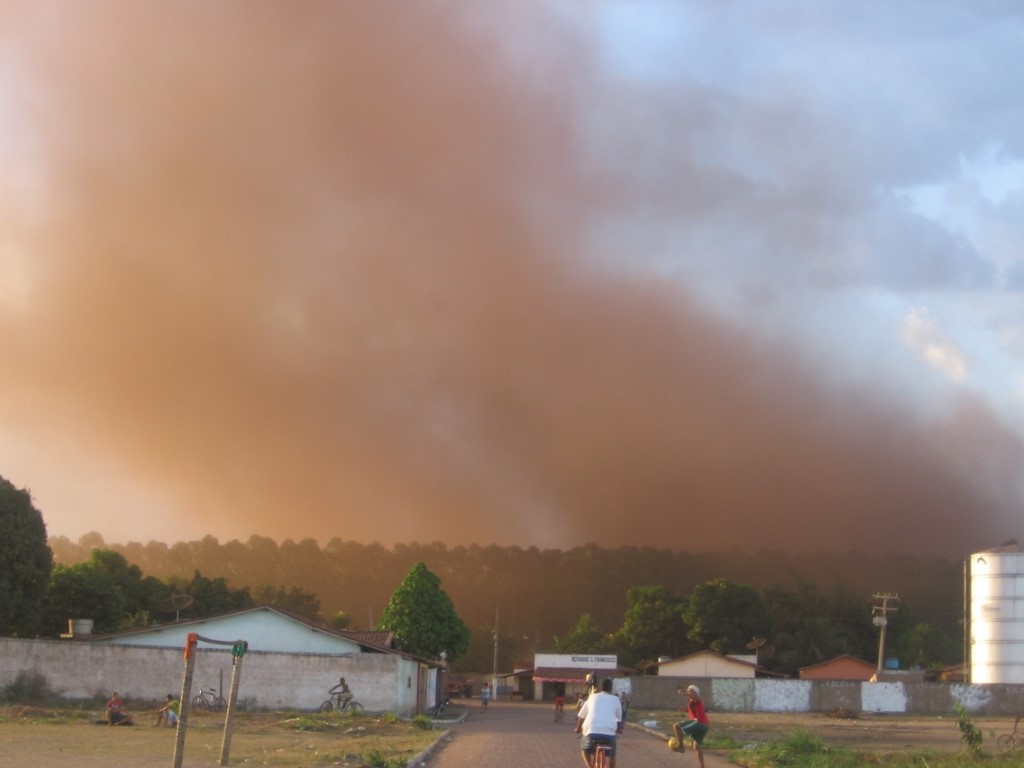 Rome, Wednesday, July 3, 2013
Within the theme we are considering this year throughout the Institute – “Brotherhood: paths of reconciliation” – we pause now to consider commitment to Justice, Peace and Integrity of Creation (JPIC) as part of our Comboni mission, understood as a “Mission of Brotherhood”. Fr. Antonio Villarino. (Picture: Piquiá de Baixo, Brazil). 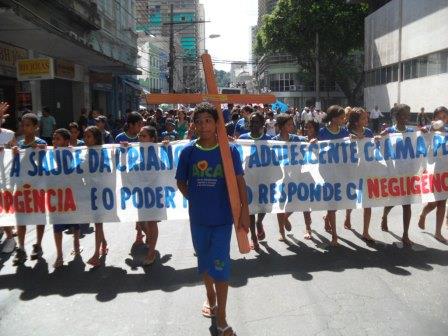 Justice, Peace
and Integrity of Creation
in the Comboni mission

In the first chapter of his Gospel, St. Mark tells of a typical day in the missionary life of Jesus, after the death of the Baptist and his deciding to return to Galilee, far from Jerusalem. It is already apparent in this Gospel passage that the mission of Jesus is integral, with a multiplicity of dimensions, attitudes, places and objects.

In fact, Jesus speaks in the synagogues but also in the houses and on the road; he preaches in the cities but also in the villages; he turns to the fishermen but also to the Pharisees and Doctors of the Law; he reads the Scriptures but always in connection with people’s daily life in their concrete situations; he invites to repentance but heals regardless of the behaviour or religious affiliation of the sick; he is moved and is available to all but reserves for himself long periods of time and lonely places for prayer; he does not allow himself to be “entrapped” by his success at Capernaum...

He has come, says St. John, so that the “sheep” “may have life and have it in abundance” (cf. Jn. 10, 10) or, in the words of St. Luke, “to bring the Good News to the poor, to proclaim liberty to captives and new sight to the blind; to free the oppressed and to proclaim the Lord’s year of grace” (cf. Lk. 4,18-21), thus responding to the eternal hope of the poor, already expressed at the time of Isaiah but present in all of history (cf. CA ’09, the Mission).

It is as part of this “integral” mission of Jesus that the life and the mission of the Church find their place, a mission that goes so far beyond the limits of the liturgy or moral teaching that it seems to be “cosmic” as Pope Benedict XVI recently affirmed. “Christianity”, he said, “is not something purely spiritual, or something merely subjective coming from feelings, the will or ideas, but a cosmic reality. God is the Creator of all matter, matter which is part of Christianity and it is only in this broad context of matter and spirit together that we are Christians. It is therefore very important that matter be part of our faith and that the body be part of our faith. Faith is not purely spiritual but God inserts us in the total reality of the cosmos and transforms the cosmos, drawing it to himself” (from the lectio divina led by Pope Benedict XVI at the Basilica of St. John Lateran, 11 June, 2012).

The Plan of “regeneration”

It is precisely in this integral or, rather, “cosmic” mission of Jesus and the Church that the charism and the mission of Comboni and the Comboni missionaries find their place (cf. Rule of Life, Preamble).

Daniel Comboni, after years of total dedication, of study and personal reflection, in a moment of deep prayer and communion with the universal Church, received the great inspiration of a “Plan for the Regeneration of Africa”. We usually concentrate on the first and third parts of this missionary proposal of his: the Plan and Africa.

We now wish to dwell upon the second part of the phrase, “regeneration”, a term that is very important in the understanding of the meaning and content of the mission; a term, besides, that evokes a similar one found in the New Testament, “palingenesia”, translated in some Bibles as “regeneration” or “new creation”. The concept binds us to human reality – and to all creation – as the environment and finality of the mission of Jesus and our mission which is not just “religious” in the strict sense, but “human” in the broadest possible sense.

The Christian mission and therefore, the Comboni mission, form part of the “missio Dei”, in the creation project of God and in his promise of re-creation (cf. Gn 1-4). Salvation, as Paul VI said, is for all human beings and for the whole human being; furthermore, salvation is for the whole cosmos which, as St. Paul says, groans as it awaits its “regeneration”.

In this sense, the mission consists in words but also in social commitment; it is a call to form a community of disciples but it is also concrete liberation from disease and from all that oppresses the human being; it is hope in the Kingdom that is to come but, at the same time, it means welcoming the Kingdom that is already present “in you and among you”; it is the discovery of the signs of the times and cooperation with all those who work for the integral good of the children of God; it is sacrament and life, religion and culture; it is contemplation and action...

The missionary practice of Comboni – who preaches, baptises and organises the Church but also fights against slavery, trains teachers and various professionals, and takes an interest in the political, social and cultural developments of his time – clearly finds its place in this context of integral mission. We may say the same of the missionary practice of the Comboni missionaries who, in their 150 years of missionary work founded schools, health centres, cooperatives and even political movements.

From Vatican II to our Rule of Life

The tradition of integral mission has been developed with more conceptual clarity since the Second Vatican Council, and especially since the famous declaration Gaudium et Spes:

“Between evangelization and human advancement- development and liberation- there are in fact profound links. These include links of an anthropological order, because the man who is to be evangelized is not an abstract being but is subject to social and economic questions. They also include links in the theological order, since one cannot dissociate the plan of creation from the plan of Redemption. The latter plan touches the very concrete situations of injustice to be combated and of justice to be restored. They include links of the eminently evangelical order, which is that of charity: how in fact can one proclaim the new commandment without promoting in justice and in peace the true, authentic advancement of man? We have taken care to point this out, by recalling that it is impossible to accept that in evangelization one could or should ignore the importance of the problems so much discussed today, concerning justice, liberation, development and peace in the world. This would be to forget the lesson which comes to us from the Gospel concerning love of our neighbour who is suffering and in need." (n. 31)

In the wake of these great documents of the Church, we Comboni missionaries have “codified”, so to speak, in our Rule of Life, approved in 1979, our integral mission. It may be useful for us to revisit these texts of the RL and re-read them with open minds and hearts, starting from the signs of our time. For example, number 61 states:

“In his work of evangelisation, the missionary is committed to the liberation of humankind from sin, violence, injustice and selfishness, from need and from oppressive structures. Such liberation finds its completion and consolidation in full communion between God the Father and all humanity”…

Since the approval of our RL, Pope John Paul II and Pope Benedict XVI have not only confirmed but also greatly developed the Social Doctrine of the Church as part of the message of the Gospel that is dynamic and actual in the changeable social conditions of our time.

“Human peace obtained without justice – Benedict XVI stated in Africae Munus – is illusory and ephemeral. Human justice which is not the fruit of reconciliation in the “truth of love” (Eph 4:15) remains incomplete”.

In the daily life of the Comboni missionaries

The commitment to justice, peace and the integrity of creation is not for us a political project or fruit of an ideology or a desire for attention-seeking but an essential dimension of the mission that we Comboni missionaries have received as a charism from St. Daniel Comboni in the heart of the Church of Jesus Christ which, with the presence of the Spirit, wants “to make all things new” or, in other words, “to re-generate” the world. This Comboni mission is, as Pope Paul VI said, complex and with many dimensions which neither exclude nor are in conflict with one other but are mutually supportive: witness and proclamation, work in favour of JPIC and catechesis, mission promotion and evangelisation, parish pastoral and the formation of new missionaries... All these dimensions form part of a single missionary project whose sole object is that people – both individually and as a community – “may have life and life in abundance”.

While not all of us are meant to carry out all the dimensions of the mission, all of us feel part of a single body in which there are different members and different functions, in reciprocal recognition of the charisma and services to which we are called but always in the ecclesial and Comboni context. The important thing is that in every community and in every province of the Institute, as a single body, we may be able to practise discernment to make the best decisions in every case – and in every context – within an integral vision of mission.

To be practical, it seems important to underline some indicators or criteria clearly affirmed in the documents of the Church, in our RL and in recent Chapters:

As stated above, even if we do not all do everything, we must all share fully in the mission of all. On the other hand, it is clear that the daily work of mission promotion, evangelisation and formation must not lack the component of justice, peace and the integrity of creation, so too, the work of JPIC cannot lack the passion for the proclamation of the Gospel and the mission promotion of the particular Churches.

It is up to each one of us and each of our communities to make this dimension of the mission part of our personal life projects, the community charters and pastoral plans.

To help our reflection, let us remember some path-questions already indicated in the various meetings of those in charge of this sector: