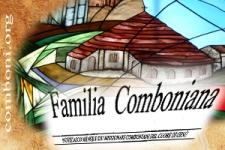 Monthly Newsletter of the Comboni Missionaries of the Heart of Jesus

May – That Our Lady may teach us to keep the Word in our hearts, and to share it with all we meet. Lord, hear us.

June – That by contemplating the Heart of Jesus, we may overcome our prejudices and love all without distinction. Lord, hear us.

On 24 April, the Italian ambassador, Raffaele Trombetta, together with his wife Vittoria, visited the project that Bro. Francesco D’Aiuto and Fr. Saverio Paolillo are piloting at Marcos Moura, a city quarter on the outskirts of Santa Rita, in the Commune of the state of Paraiba, in north-eastern Brazil.

During the first part of the visit, the Ambassador toured the Recycling Cooperative, COOREMM, that has been involved in bringing dignity to the catadores (collectors). Having visited the structures of the cooperative, the Ambassador met a group of the Cooperative members who told him the story of what they had achieved, thanks to the COOREMM and the challenges still facing them. He then made his way to the Projeto Legal where, outside school hours, 126 seven to fifteen-year-old children and adolescents are cared for.

As Fr Saverio said, for the people of the outskirts, doomed to live in a state of abandonment by the local institutions, this was an opportunity to emerge from the ‘invisible state’ or the crime pages of the media and to be seen, loved, welcomed, respected and valued.

The third and final conference on the existential peripheries associated with the world of the family – Mobile technology and new experiences of education – was held on 15 April.

Professor Filomìa spoke of the use of mobile phones by the young generations and the consequences of this in their lives. Giving a running commentary on filmed sequences, she emphasised how mobile technology may create a need for ubiquitous connectedness where space and time are lost in an ‘eternal present moment’, relationships are not determined by physical but ‘virtual’ presence, with the result that relationships are in danger of becoming shallow; in the network, social norms, the speaker underlined, are seen as ‘abstract’ and, therefore, less obligatory. All this brings up problems of freedom and supervision.

The problem, she concluded, lies not in media technology, whether mobile or fixed, or in the young people who use them, but in the many adults who have reneged on their educational responsibility to provide young people with values against which to measure themselves and to help them to learn how to base the use of freedom upon values.

To the rhythm and the sound of Afro music, we celebrated the thanksgiving Mass for the sixtieth anniversary of the arrival of the Comboni Missionaries in these lands at the cathedral of Esmeraldas. Even though we did not wish to make a great display of it, the church was packed with Comboni Missionary men and women, diocesan priests, religious and many friends who have accompanied us for many years and feel very close to our missionary charism. Mgr. Eugenio Arellano could not be there but made his presence and fraternal affection felt in different ways.

As we listened to the testimonies of some of the ‘elders’ of Esmeraldas who were present, it seemed only yesterday that on 13 April, 1955, Fr. Angelo Barbisotti (the first bishop of the Vicariate), Fr. Luigi Marro (presently in the community of Verona) and Bro. Angelo Fusetto came to the locality of Tachina almost unknown to anyone. In those days, the social situation and the abandonment of religion were in a deplorable state. For this reason, Pope Pius XII decided to entrust to the Combonians this territory inhabited by black people who lived in poverty and endured many hardships caused by poor communications and the climate.

There was an especially moving moment when we placed a wreath on the tombs of Mgr. Barbisotti and Mgr. Enrico Bartolucci and, symbolically, on the tombs of all the 55 missionaries who died during these years as we honoured all who still give their lives for these peoples. It would take some time to describe all the many initiatives of evangelisation, the founding of the Christian communities and the training of responsible catechists; the same holds for the human development projects and social services such as the Boys Town, hospitals, centres for the elderly, schools, technical institutes (a field in which our missionaries were particularly distinguished), and not forgetting the work of mission promotion and that of the seminaries. We may well say that integral evangelisation has been carried out in all its dimensions, according to the method of St. Daniele Comboni, whose example lit up the path trodden by his missionaries in Ecuador. As we know, the Comboni Missionaries reached out from Esmeraldas and Quito as far as Manabí, Guayaquil and Colombia.

On the afternoon of Saturday, 11 April, the Bro. Alfredo Fiorini Centre was opened at Castel d’Azzano, a few kilometres from Verona. It will cater for non-self-sufficient Comboni Missionaries returning from the missions. Among those present at the event were: the Superior General Fr. Enrique Sánchez G., the General Assistant Bro. Daniele Giusti, the General Treasurer Fr. Claudio Lurati, dozens of Comboni Missionaries from Verona and many of the communities of Italy, the Bishop of Verona, Mgr. Giuseppe Zenti, the city mayor, members of the civil authorities and about 800 relatives, friends and benefactors.

The building, constructed in a very short time (18 months), is in the Municipality of Castel d’Azzano, and impressed everyone for the beauty and functionality of its various departments. The Provincial of Italy, Fr. Giovanni Munari, said: “We have received much from the local Church. We wish to give back to it something of what the mission taught us”.

Around thirty Comboni men and women missionaries working in the Comboni provinces of Europe took part in the IX Symposium of Limone, 2015, organised by the European Group for Theological Reflection (EGTR), from 7 to 11 April, at the native house of Comboni at Limone sul Garda (Italy). The theme this year was: “How to be Good News in Europe today”.

The Symposium also aimed at offering material to those who will participate in the next General Chapter. The three days were characterised by the three verbs: to consolidate, to deepen and to envision, namely, to consolidate the experiences of mission in Europe, giving time to listening to what has happened in recent years, starting from life and ongoing experience; to study the new possibilities of what may be good news for the future; and to imagine what to propose so that the mission in Europe may be more an expression of missionary joy.

The following themes for action were chosen: circularity, spirituality, the Word of God and the situations; to live and walk with the poor: simplicity of lifestyle and structures; attention to the economic and financial dimension; to promote participated governance.

The three related experiences were appreciated by all: that of the Comboni Sisters in Berlin (Sr. Margit Foster) combating human trafficking; that of the community of Palas de Rey, about the journey of Santiago, in Spain, to practice hospitality and walk part of the way with the pilgrims (Fr. Juan Antonio Fraile); that of the community of insertion and sharing with the poor in the Sanità quarter of Naples (Fr. Alex Zanotelli and Felicetta Parisi).

At the end of the Symposium, the participants signed a communiqué condemning the project of the Ministry of Agriculture and Food Security of the Mozambican government to cede 102,000 Km2 of fertile land (an area larger than Portugal) to the ProSAVANA Consortium made up of businessmen from Mozambique, Japan and Brazil.

The Centre for African Studies at the University of Oporto recently published the book “Deboli tra deboli”. Memórias de um missionário em Moçambique. 1964-2005, on the life of the eighty three-year-old Italian Comboni Missionary Fr. Graziano Castellari, who spent most of his life in Mozambique. He has been living in the Verona Mother House since 2009, for health reasons.

The book, due to be launched in Verona in July, forms part of the category Esperienze dall’Africa (Experiences of Africa) and is the first in a new series entitled Storie missionarie (Missionary Stories). It is the diary of Fr. Castellari, embellished by an introduction, a preface, photos, maps, a glossary and a bibliography.

The book was introduced by Professor Elvira Mea during a gathering that took place in the amphitheatre of the Faculty of Letters of the University of Oporto on the afternoon of 8 April. In defining the missionaries as “masters of the human condition”, she stated that this was “a work that went beyond its expectations, an extraordinary adventure inserted into the history of Mozambique, a marvellous hymn to life and Christian humanism, a great lesson in life”.

Fr. Castellari spoke via internet. His testimony was followed with great interest by those present. The missionary said he was neither a writer nor a saint and that he wrote his memoirs “because it is important to tell others what God does for his people”.

From the 14th to the 17th of April 2015, the Provincial Secretariat for Evangelization has organized in the provincial house of Juba a workshop on the theme: “Family life and Human Growth in South Sudan”. The workshop was coordinated by Bro. Alberto Parise, who came on purpose from the Brothers’ Centre of Nairobi (Kenya). Twelve confreres attended, representing all the communities of the SS Province. The workshop was opened also to other pastoral agents. In fact some diocesan priests and some missionaries from other missionary Institutes attended, together with twelve lay men and women, all engaged in pastoral work in the parishes.

During the workshop, 20 themes, presented as relevant by the participants, were discussed. On each one there was ample sharing in the groups, and some recommendations were presented. On the fourth day all the participants had in their hands a booklet of 40 pages in which all the material had been collected. The assembly was asked to prioritize and suggest plans of action. Among all the themes dealt with during the workshop, those proposed as deserving particular consideration for action were the following: women empowerment, youth ministry, forgiveness, better environment for children, a pastoral program/catechumenate for marriage. Suggestions were offered how other issues (such as the dowry, early marriage, work and economy in the family) could be included.

The participants found the exercise positive and useful, both for the findings, which are now in the hands of the pastoral agents for consideration and action, and also for the methodology itself, completely new to all of us.

The contribution of the lay people was much appreciated, in a particular way that given by the women. It was agreed that in the renewal of the pastoral approach, in general and especially in the field of family life, their role is paramount.