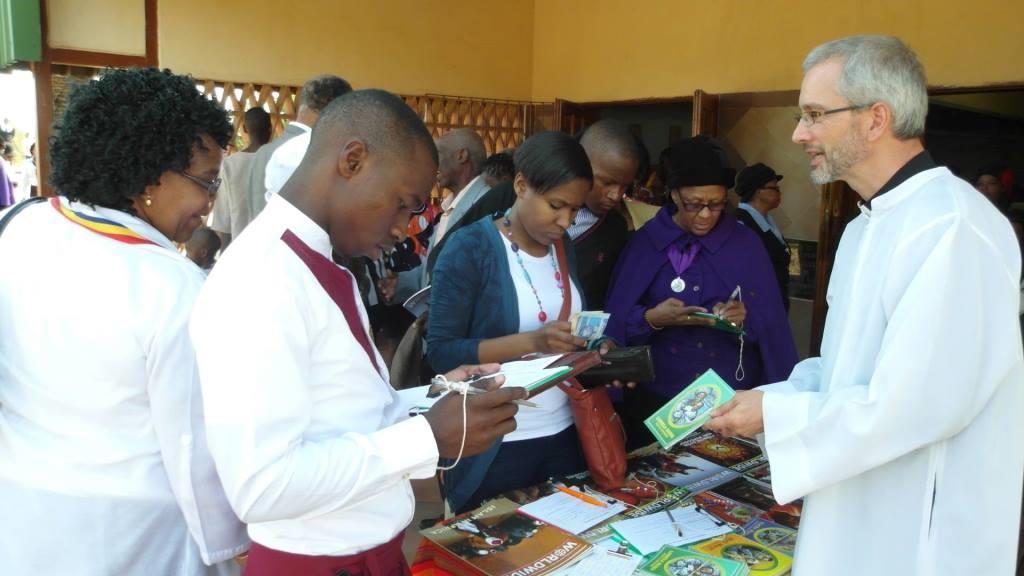 Thursday, September 15, 2016
The International Journalism and Media Awards 2016 honour individuals, publications, associations and institutions worldwide irrespective of all differences. The awards recognize their outstanding and exemplary contribution to humanity and journalism. The International Award for Promoting Dialogue – The Titus Brandsma Award 2016 has been attributed to the “Worldwide” Magazine based in Johannesburg, South Africa. The editor of the “Worldwide” magazine Father José Rebelo and his team members work to guarantee greater understanding and respect among peoples, cultures, religions and faiths. In the picture: Fr. Günther Hofmann, Comboni missionary, in South Africa.

Here is the front cover of February-March 2016 issue of the Worldwide magazine which takes extra sacrifices to promote dialogue, understanding, peace and harmony.

The jury members together with the directing committee are happy to bring to you some insights into some of the award winners and their works. We have taken into account requests from those who do not want to publish their entries and portraits considering sensibilities, situations and places in which they work and live.

For the laureates, the awards are first of all prestige, recognition and honour. It is an occasion to step higher professionally and personally and explore new avenues in human pursuit for excellence, examples and standards.

The international awards enhance and make journalistic and media works more valuable in diverse fields, and acknowledge the efforts of all participating journalists and media professionals as well as their milieux. They help guarantee freedom of expression and freedom of the media on all levels in spite of different types of pressures especially from political, business and religious leaders and authorities.

The awards are recognition for lifetime and reference for professionals to consult issues that concern nations, continents and our world. They reconfirm the competence and consolidate the authority of the winners on their domains and topics that are of major relevance and extreme importance in the world affairs.

They uphold solid values, ideals and ethics and set norms for much needed exposure of realities, for attitudes in reporting, and for leading to lasting solutions.

More than 2500 entries were submitted for the international awards in various categories. The awards will be conferred at the world congress to be held in the Philippines in October 2016.

The editor of the “Worldwide” magazine
Father José Rebelo.

The International Award for Promoting Dialogue – The Titus Brandsma Award 2016 has been attributed to the “Worldwide” Magazine based in Johannesburg, South Africa. The award is instituted in memory of Blessed Titus Brandsma (1881-1942), a Dutch Carmelite who was a journalist. He was killed in a Nazi concentration camp in Germany during the Second War.

The editor of the “Worldwide” magazine Father José Rebelo and his team members work to guarantee greater understanding and respect among peoples, cultures, religions and faiths. If you go through the past issues of the magazine, you can find that its journalists take profound reality checks to guarantee positive approach exploring origins, cultures, contexts and conventions worldwide. The magazine considers the whole world one family in order to give respect and dignity to nations and peoples in all corners of the globe. Thus it transcends artificial barriers and fences.