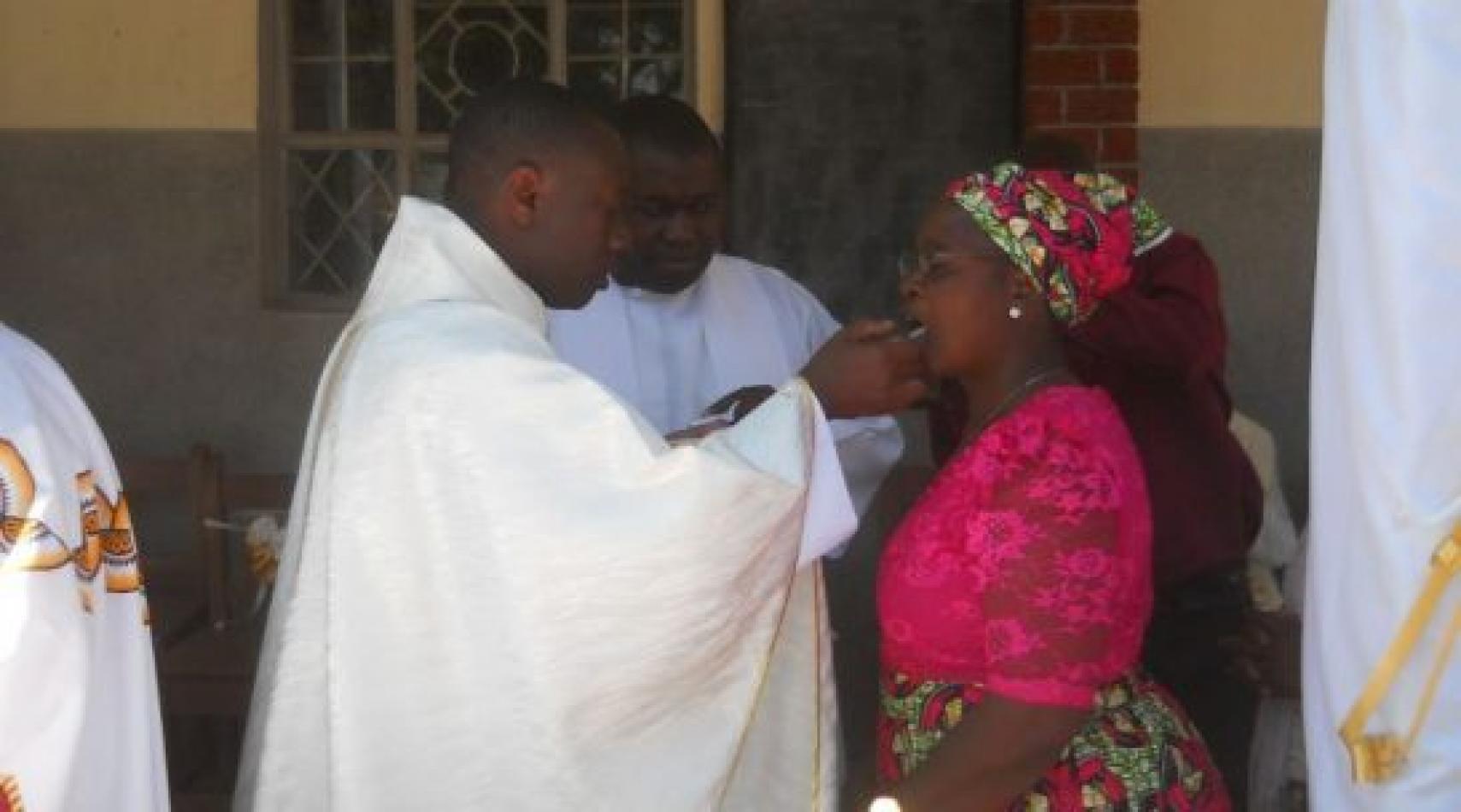 Wednesday, August 22, 2018
“My vocation is a journey of valued little decisions that can best be contemplated as a whole and can only be beautiful if seen from a panoramic view”, says Fr Collins Mweshi a Zambian Comboni missionary working in Karamoja, Uganda. Fr Collins was recently ordained and accepted to share his vocation journey with New People.

Missionary Story of Fr. Collins Sampa Mweshi
“My journey of discernment has been an ordinary story of events led by the hand of God”

When I became a Christian, I actually did not know what I was doing, it was my parents who decided so, and hence started the life of a Christian convert in 1986. I am the fifth born child of Paul Mweshi and Brenda Namfukwe’s nine children. I was born on 14th June 1982. I started growing up surrounded by three brothers and a sister. Later, three more girls and a boy were born to this family.

Initially, we lived in Matero, a suburb, west of Lusaka, Zambia, but relocated to George compound in the same vicinity. I was baptized at St Mary’s parish in Matero, though my childhood memories and those of my early Christian life are of St Kizito parish and George compound. I was catechized, received first Holy Communion and confirmed there. St Kizito remains the reference point of my Christian faith.

As a child, I loved hunting birds and playing football. I also loved school. But I had overlooked the desire to know and had taken to playing football. Consequently, when I sat for Grade Seven Examination at Matero Boys Primary School in 1995, I performed poorly. I was heart broken and shed tears. I decided to break my strong ties with football and concentrate on school.

I went to Edwin Mulongoti Primary School in Lusaka for a year. While in school, one day during break time, I shared the word of God with a friend, and classmate Taso Zulu.  He read a passage from Paul’s letter to the Galatians (5: 19-21). That fact of not finding a place in the kingdom of God due to self-indulgence mentioned in that passage, made me seek confession, beg God to protect me from sin and that He helps me find a good wife so that I didn’t fall into sexual vice. As early as it was, I made that little decision to keep away from sin.

In 1997, I began my junior secondary school at Kabulonga Boys in Lusaka, where I studied for the next five years.  While in grade eleven  my ambition to pursue science coupled with a strong desire to evangelize,  mushroomed. Consequently, I decided to be active in one of the youth groups at church. A friend and classmate, Sunday Maseko, advised me to join the vocations group.

In my first vocations group meeting, I burned with zeal to know what vocation was. The secretary at that time, Martha Kambuzuma, told me, “Vocation is a call from God.” Absolutely! But how could I understand the meaning of this? The answer was too simple to question yet too simple to understand. I decided to search what vocation meant for me. I learnt about the vocations in the church: marriage, priesthood and religious life. I read different stories on vocation from scripture. I prayed.  I read the book ‘This path could be yours’and discovered the different ways by which people are called to serve.

Later, I came across a definition of vocation by St Pope John Paul II as “a relationship that God has with every human being in the freedom of love.” At that I stopped, and started a deep search within me.  In particular, I started listening to God about which way of life would relate me more with Him in the freedom of love.

After my high school in 2001, I became a peer educator on drug and substance abuse for a year. Then I worked as a clerk at a Milling Corporation for eight months. It was at work that the desire to become a priest grew even  stronger. I worked and related well with my bosses and customers. But still I felt it was not my way of life. At some point, I entered into the life of casual workers and saw how their earnings defiled human dignity. That supposed injustice did not, however, lead me to a passion for workers’ rights. I thought of their souls (Lk 9:25). Succinctly, the care for souls overwhelmed the fight for workers’ rights.

In 2003, at the first religious profession of Fr Andrew Bwalya, a priest from my home parish and his companions, I sat in church facing a picture of St Daniel Comboni under printed, ‘A thousand lives for the Mission’. The preacher, Fr Luigi Cassagrande, as though pointing at me, mentioned that there were young people in the church that had the zeal to join the work of evangelization as Comboni missionaries. Those words espoused within me the Comboni passion, ‘A thousand lives for the mission’, literally dragged me into saying, “Lord, I give my life for the mission”.

The enthusiasm with which I decided to quit my job in order to become a religious priest was as if priesthood were a day’s journey. Yet eleven years of formation followed. I spent a year as an aspirant under the direction of Fr Dawit Wubishet, the vocation promoter then. I studied  philosophy at the Postulancy in Balaka, Malawi, from 2005 to 2008, followed  by  two years of novitiate in Namugongo, Uganda.

I had the joy of making my first religious profession on 1st May 2010, in the Basilica of the Martyrs of Uganda, a holy place. From 2010 to 2014, I studied Theology at St Peter’s Regional Seminary, Pedu, in Ghana, while continuing my missionary formation at Sts. Peter and Paul Scholasticate. I did a year of missionary service in Malawi. On 10th July 2015, I made my final religious profession at the Provincial house in Lilongwe.

On 22nd August 2015, I was ordained deacon at Msamba parish by Most Rev. Archbishop Tarcisio Ziyaye. Finally, on 28th May 2016, I was ordained priest by His Grace Telesphore Mpundu of Lusaka Archdiocese, at the Cathedral of the Child Jesus.

My journey has been an ordinary story of events led by the hand of God. It is a journey of valued little decisions that can best be contemplated as a whole and can only be beautiful if seen by a panoramic view at the end. My parent’s decision to have me baptized, the decisions to keep away from sin, concentrate on school, to be active at church, to search for a Vocation, to learn from scripture, to be a peer educator, to have an experience of work and all the desires to evangelize and care for souls that accompanied them are all the hand of God. In these decisions I experienced three divine promptings.

The first prompting was about entering the Kingdom of God, which called for my own conversion. The second was the desire to evangelize. The third prompting was that unexpected shift from a perceived injustice to the care of souls.

I am now able to see and articulate these things because I made a journey. I prayed and listened to God and my directors. I feel encouraged to put out my youthful energy into the deep of the world for a great catch of souls. (Cf. Lk 5:4).