The General Chapter and the ministeriality 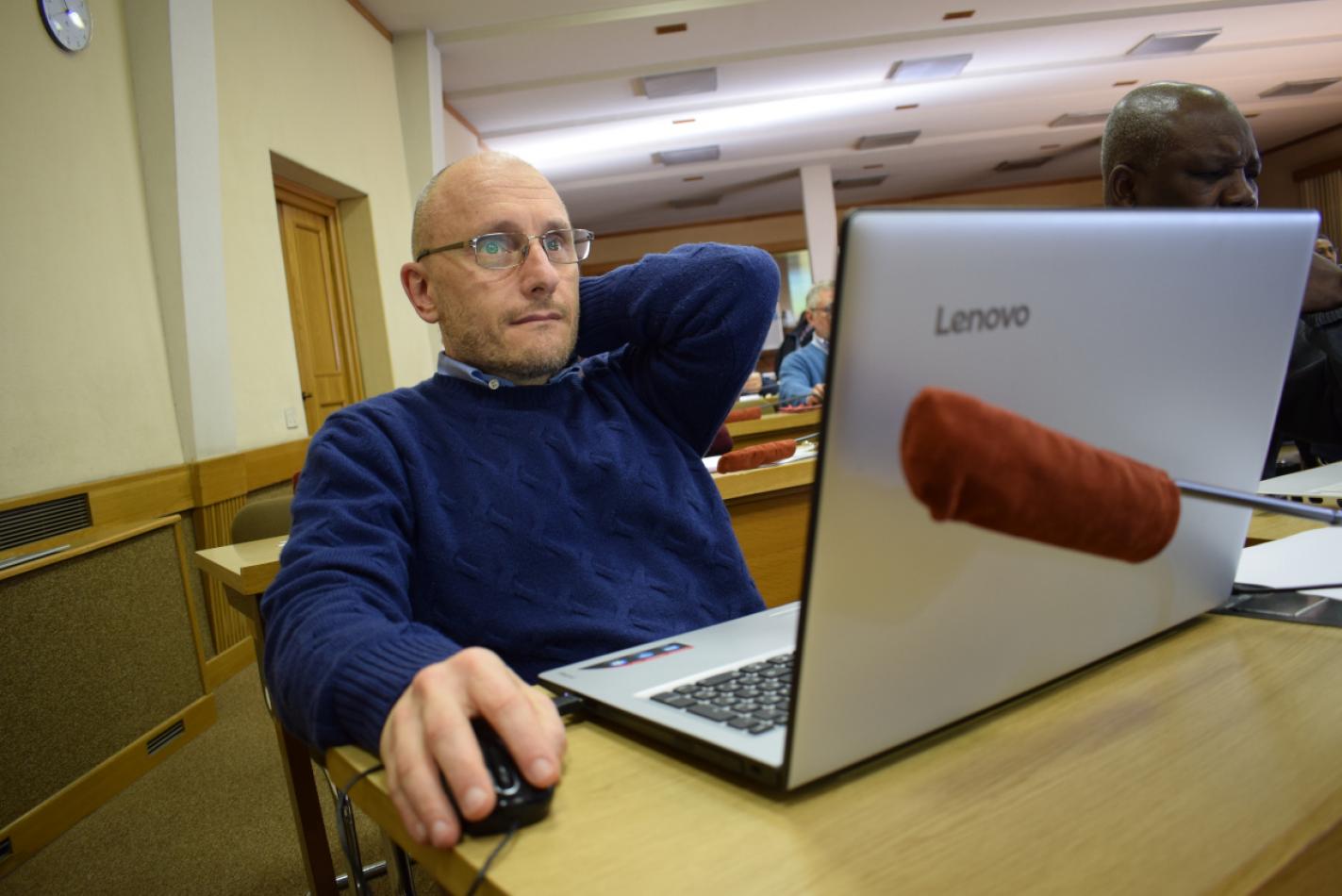 Sunday, March 8, 2020
In the view of Evangelii Gaudium (EG), the mission of the Church and all its ministers within it are directed towards building up the Kingdom of God, striving to create room in our world where all people, especially the underprivileged and the excluded, may experience the salvation of the Risen Christ. The ministers, therefore, assume a role of crucial importance as a place of encounter between humanity and Word and Spirit in history. (Bro. Alberto Parise, in the picture)

THE GENERAL CHAPTER
AND MINISTERIALITY

There are times in history that mark epochal movements or transitions from one socio-cultural system to another, with a high degree of discontinuity. The period in which Comboni lived was certainly one of these historical moments. It was the time of the industrial revolution, the result of the great leap that science and theology were making in science as well as in the fields of finance and politics. The Church found itself on the defensive, faced with the so-called “modernism” that it perceived as a threat. It was a Church under siege, politically and culturally; and in its resistance, it ran the risk of self-referentiality. And yet, precisely at that difficult time, it experienced a great rebirth: among the contradictions and social evils that emerged with the new industrial capitalist economic system, there also emerged a force for social apostolate, through the work of the laity and of a large number of new religious institutes. The colonial movement – a response to the politico-economic logic and to the ideology of competing nation states – on the other hand, was accompanied by a deep cultural interest in exploration, things exotic and the spirit of adventure. However, there was also the rebirth of a new missionary movement towards distant lands and peoples. The Church was entering a new epoch with deep spiritual renewal – as is attested to by the spirituality of the Sacred Heart that characterised those times – bringing about a new missionary model.

The XVIII General Chapter was celebrated in an analogous epoch for the Church. The discernment of the Chapter was harmonised with the interpretation of that turn of events which Pope Francis had written in Evangelii Gaudium (EG): his was a theological reading of the new epoch that opens, in pastoral practice, to a new missionary impetus. New in the sense that it abandoned the paradigm we were used to: a mission based on a geographical model in which the protagonists were “special units” of missionaries who were real pioneers, whose role was to found local Churches. The reality of globalisation and the dramatic socio-environmental crisis of our time – a consequence of a prevailing unsustainable model of development that has brought us close to the point of no return – require a renewed approach to evangelisation. After all, we just have to look at our Comboni situation to realise that, in practice, the model of the past has been discarded. For example, the system of ‘sending’ provinces (in the northern hemisphere) and provinces (in the southern hemisphere) that ‘receive’ missionaries, no longer corresponds to what is really happening, as it’s the case with the idea that the countries of the south are for “evangelisation” and those of the north for “mission promotion”. We can now see the urgent need for mission promotion, for example, in Africa and – as also stated by the Chapter – of the mission in Europe.

Evangelii Gaudium therefore proposes a new paradigm of mission. No longer simply geographical, but existential. The Church is called to overcome its own referentiality and to go out to all the human peripheries where people suffer exclusion and live with all the hardship of economic inequality, social injustice and impoverishment. All these situations are no longer a dysfunctional aspect of the economic system but a requirement for the system itself to prosper and continue. The mission becomes a paradigm of all pastoral action and the local Church is its subject. So, what is the role of the missionary institutes? It is that of animating the local Churches to live out their mandate of being missionary, Churches that go out to the existential peripheries. It is a matter of proceeding in communion within realities characterised by diversity and pluralism, creating together a common perspective that values the differences and “conquers” them, without destroying them, creating unity on a higher level. These journeys are characterised by closeness to the poorest, by service and the ability to proclaim the Gospel with the essentials of the kerygma both by word and by a way of life. Pope Francis is relaunching the vison of the Church of the Second Vatican Council, as “the sacrament, or the sign and instrument of intimate union with God and of the unity of the whole human race”. In our new world formed by a digital revolution and the globalisation of the markets of financial capitalism, the Church is called to gather a ‘people’ who are able to go beyond the confines of belonging and walk towards the Kingdom of God. Then the Christian testimony to the Risen Lord will be productive and the Church, too, will grow by attraction and not because of proselytising.

Today, the epoch of digital revolution is a time of great missionary opportunities, just as the time of the industrial revolution was for Comboni. Since we are speaking of a new paradigm, the challenge lies in thinking, structuring and training ourselves accordingly. The first step is to recognise the grace of the Comboni charism which is very relevant and made to measure for the new paradigm of mission. In the first place we have the central idea of “regenerating Africa with Africa”, a concise image that recounts a most complex and articulated story: there is the idea of generating a ‘people’ capable of building up an alternative society, in harmony with the action of the Spirit. The proclamation of the Gospel helps to bring to completion those “seeds of the Word” already present in the cultures and spirituality of the people. Comboni also stressed the importance of this work being “catholic”, that is to say, universal: far removed from self-reference, he saw himself as an integral part of a much greater and broader missionary movement with a variety of gifts and charisms. He saw his role as that of an animator who made an untiring effort to move the conscience of the Pastors of the Church concerning their missionary responsibility so that Africa's hour might not pass in vain” (RL 9). In the view of EG, the mission of the Church and all its ministers within it are directed towards building up the Kingdom of God, striving to create room in our world where all people, especially the underprivileged and the excluded, may experience the salvation of the Risen Christ.

The ministers, therefore, assume a role of crucial importance as a place of encounter between humanity and Word and Spirit in history. It is a fecund encounter, as Comboni well understood. This is why, in his Plan, he envisaged a series of small theological and scientific universities along the coasts of Africa, to train ministers in various fields who would then spread out into the interior, to bring about the growth of communities imbued with the spirit of the Gospel, capable of social transformation, as the models of Malbes and Gezira show us.

In the spirit of the Chapter, the requalification along ministerial lines of our missionary service requires, as Comboni realized, a new “structure” of the mission that sustains and fosters it:

In brief, as the Chapter Acts state, “the growing awareness of a new paradigm of mission spurs us on to reflect and re-organize our activities along ministerial lines.” (CA 2015, No. 12). As invited by Pope Francis (EG 33), the Chapter has indicated the path of pastoral conversion, abandoning the criteria: “as we have always done” and setting in motion a series of action-reflections to reconsider the goals, structures, the manner and method of evangelization (CA 2015, No. 44.2-3).
(Bro. Alberto Parise)