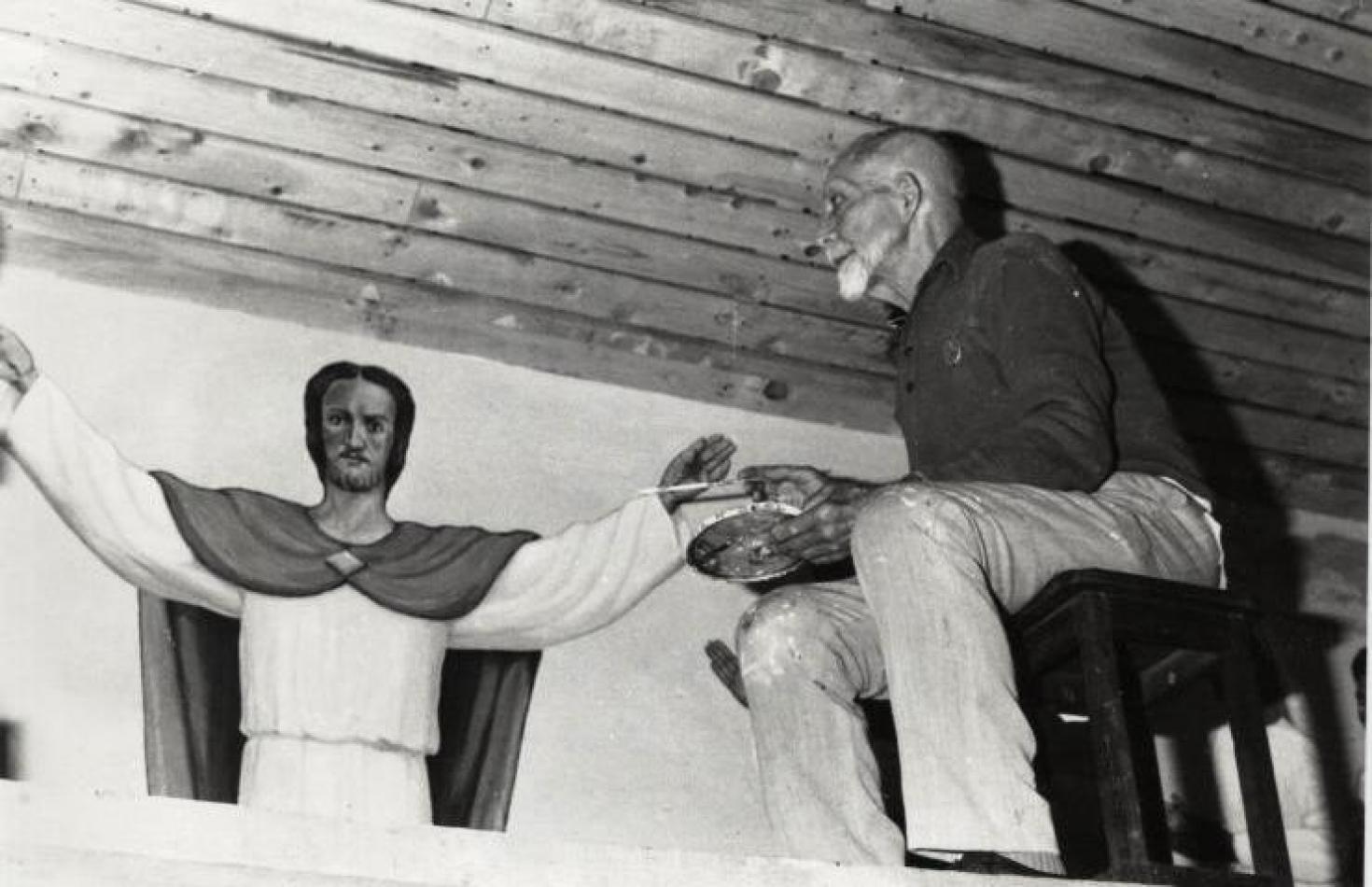 Saturday, February 27, 2021
His house, in Pressano, near Trento in Italy, is like a mansion: a carved stone portal leads the visitor into a large internal courtyard. From there a solid dark marble staircase leads you into a large hall. Balconies and terraces add a touch of aristocratic distinction to the whole building.
[Comboni Missionaries]

Vittorio, a grown-up boy, would show his artistic talent painting the walls with frescoes depicting landscapes, religious and floral compositions, wonderfully fitting into the surrounding environment and colourfully expressing the sentiments of the whole family.

Vittorio was born, on October 15th 1901. At the age of 24, he left his village for his military service from October 1925 to April 1927.  Back with his family, Vittorio was involved in the organization of the Catholic Action movement.  It was at that time that Vittorio increased and enriched his spiritual fervour by reading mission magazines. At first the idea was simply a dream for him, but the dream kept coming back so often that it caused him many a sleepless night, so one day he spoke of it to his parish priest.

The priest said: “If there is anyone who has the qualities to be a missionary, that person is you. There is a small problem, though.”

“You have only done primary school, and you are now rather old. A priest must study,” the priest continued. Vittorio answered: “But I could be a lay brother. I have heard that brothers do a lot of good in the missions.” The priest said “That’s right. Why not go to talk with the Comboni Missionaries in Trento.”

One morning, Vittorio decided to go.  The talks he had with a Comboni Missionary helped him clarify all aspects of a missionary vocation. “To be a missionary means that one has to be a man of God and a father of souls, particularly the most abandoned and needy, just as Mons. Comboni, the founder of our Institute, taught” this is what he was told by the missionary. “I can honestly assert that this is exactly the driving force behind my choice: love of God and love of neighbour. If I wanted to lead a comfortable life I would just stay home, where, thank God, I have all I need,” answered the young man. “If this is what you think, then just send in your application. I am sure you will be allowed to join,” the priest added.

Vittorio applied on August 16th 1928.  One month later he entered the Venegono novitiate, to start his immediate preparation for mission life. He took the religious habit on April 21st the following year and made his first profession as a religious missionary on February 2nd 1931.

In July 1931 Bro. Fanti was already in Khartoum where he assisted Querici, the Syrian painter who had been summoned from Cairo to decorate the newly-built Cathedral of the Sudanese capital and the chapel of Comboni College. That was the beginning of his long career a painter.

Bro. Fanti was in Khartoum for four years and his work can be still admired today. Before the whole work was completed, he was assigned to Uganda. Gulu Cathedral was waiting his artistic talents, but on reaching there, somebody said there was something more urgent that needed the ability of a good Brother. Bro. Fanti locked his brushes and pigments in a cupboard and instantly became a mason and carpenter. Vittorio was very meek and respectful of others, he knew how to keep up a conversation with fitting words and the right tone of voice. He could imitate many people perfectly, though always for amusement and never being offensive. At times he spent his recreation describing fantastic plans for multi-story highways for Karamoja, the most arid part of Uganda, or other futuristic dreams, drawing smiles even from the most intrepidly self-controlled individuals.

In May 1953 Bro. Fanti was sent to England to learn English. A few months later he was already back in Africa.  He stayed in Africa for very many years without returning to Europe and worked in most of the mission stations in Uganda and Kenya, contributing with his art to their development. There are so many churches that bear the mark of Bro. Fanti, that one may be deceived into thinking all he did was painting: not quite, he was in turn mason, carpenter and housekeeper. Here lies his greatness: he could pass from the high art of painting to the humble job of mixing mortar or house tending with the same joy and happiness of heart.

But of course, Bro. Fanti will always be remembered as the missionary painter. This is the means he used to spread the gospel message; his paintings preach Christ to the people. Thus his ‘preaching’ will go on and will even gather force for as long as his paintings last. Each painting of his is a catechesis, the fruit of deep personal and accurate study, the result of his prayer and meditation. He never copied or imitated. Each picture is a new creation, drawn from his sensitive spirit. We can state that Bro. Fanti was truly a perfect catechist with his word and with his art. His openness towards the Africans stood out immediately. He took for granted their customs and way of life.

Bro. Fanti, with many other missionaries, witnessed the tragic change of Uganda from ‘land of plenty’ into land of bloody conflicts. He, too, experienced fear, had to hide or flee into the bush at the arrival of armed bands. In spite of all this, he never showed discouragement or uttered a word of defeatism or called down God’s curse on any person.

The first thirty years of his mission activity left him little time for his artistic talent. He was totally occupied with building houses, churches, schools and hospitals.  As the years passed, the demand for his art increased, and not only from the Comboni Missionaries, but requests came from Diocesan Priests and members of other Institutes. Bro. Fanti would have liked to help them all, but his strength was now subject to inevitable decline as he grew older.

His last work was the head of a horse, using glued paper mounted on a wire frame: a masterpiece made for the school. In Uganda horses are practically unknown. Fanti wanted perhaps to finish his artistic career with a work reproducing what he loved so much in youth: the horse. Being close to Kampala he was frequently visited by confreres. At the end of 1988 he was again transferred to Aber for rest and, as he used to say, to wait for the final call of the Lord. It came on June 19th 1989. The doctors and confreres had previously noticed that he was fast declining, but he tried never to miss community acts and used a wheelchair to go to church.

Only at the very end did he allow himself to stay in bed for most of the day. He tried to the last not to be a burden on anybody; the very morning that was to be his last he asked for soap to shave… but he was not able to do so. He died in the evening surrounded by many of his confreres that so often had called on him to greet him and ask for his prayers when he would be in the house of the Father. Bro. Vittorio lived those final instants with a calm smile and with longing for the Lord in his eyes.
[
Comboni Missionaries]