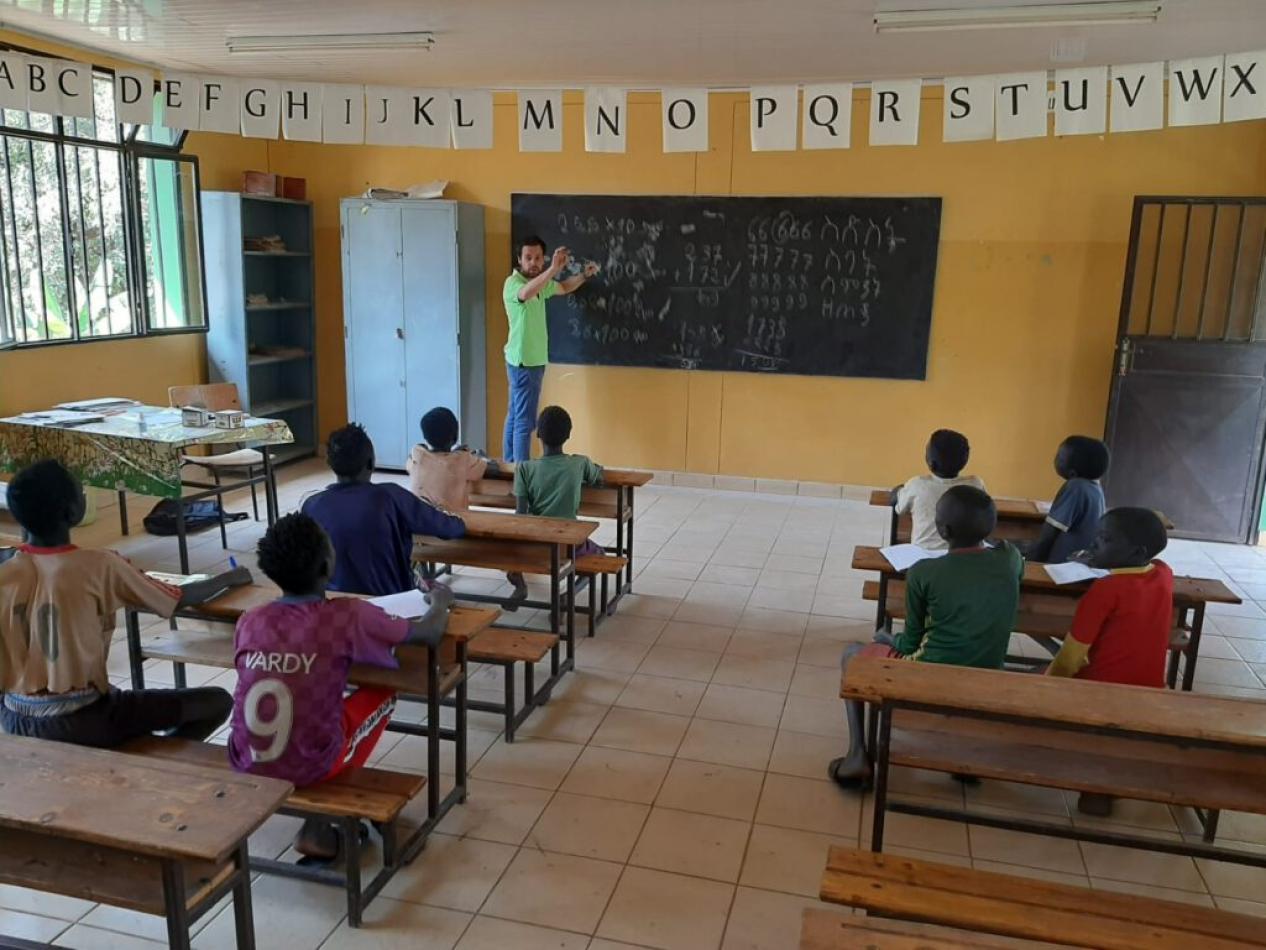 Saturday, August 28, 2021
Our school time, especially infant and primary school, usually marks our lives in one way or another. Great memories pile up: friends who are a big part of who we were, teachers who touched our hearts and opened paths we had not even imagined until then… In general, a shared life that filled us with passion and joy and that we will almost always consider as the best stage. However, in Ethiopia, school can have a more complete meaning.

In Gumuz, the region where I live, the Comboni family has five kindergartens (three run by the Comboni Fathers, two by the Comboni Sisters) and an elementary school (run by the Comboni Sisters). All these centers were requested by the local government itself, more than twenty years ago, which understood that this underdeveloped region needed educational spaces that would fulfill two objectives: on the one hand, to promote education in order to be able to guarantee an autonomous and dignified future; on the other hand, to create spaces where boys and girls of all the ethnic groups present in the area could coexist, in equality and friendship, so that the division (so present and so deep in the region) would disappear from the pillars of life (childhood and adolescence) and the idea of complete fraternity would be fostered. 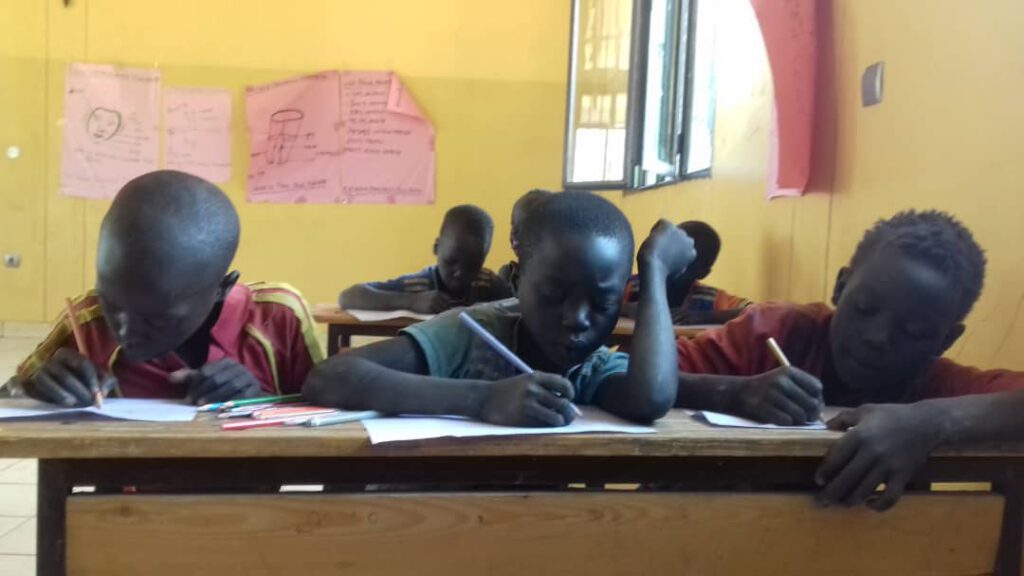 This has been the objective of the Comboni family all these years, from the general educational plans to the daily work: to create a place where living together is as important as the acquisition of knowledge and skills.

However, the social reality has changed a lot in the last two years. When I arrived in Ethiopia, this region was in the midst of an ethnic conflict between ethnic groups (with killings, displaced people, burning of houses, etc.). When the situation was normalizing, COVID-19 appeared to break the normality, close everything and spread panic (which had already become a regular “visitor” in this area). And, without having managed to stop this problem, a new ethnic conflict, even more serious than the previous one, struck the life of the inhabitants of the region.

The problems that we found in the first conflict multiplied, expanded and knew no religion, age or sex to have a little mercy. The day-to-day life was dominated by a panic already known, but that reached unsuspected limits. Everything was locked again with the key of fear, violence and discouragement.

The situation demanded a response, and the school of the Comboni Sisters – which is the one I am writing about – became more than a center for living together, it became the “Hope School.”

Facing the reality of violence, many people, mainly women, children and the elderly, chose to leave their homes. Many went to hide in the forest, but the vast majority of those who lived around the school, almost instinctively, and out of enormous trust in the sisters, chose to take refuge in the school.

It was amazing to see how they entered by dozens, or hundreds, with the few things they could grab before escaping, in an improvised diaspora, carrying belongings, children, babies, grain, animals, etc. The school opened its doors, and became, more than their home, their refuge, since, more than comfort, they sought security. The classrooms were emptied and transformed into places to sleep, cook, eat and receive care, as well as other spaces and common areas, even the courtyards and fountains.

As the weeks passed, the situation gave some respite; people returned to their homes, but not to normality. Fearing that their belongings might be looted, they feared mainly for the grain they had collected throughout the year. They again placed their hope in the school, which once again opened its doors so that they could take the grain, in hundred-kilo sacks, to be stored in the only place they trusted at the time.

This situation was especially serious for the boys and girls, who were living in fear and feeling unprotected. The Sisters, aware of this, put the school back at the service of the children, creating a space of trust. Despite the fact that officially all the schools in the area were closed, the doors of our center were opened almost daily to give tutoring and review classes, to welcome anyone who came and allow them to paint, draw, read or write; and what was most successful, to organize (or rather, to improvise) games and sports activities. At that time, the most important thing was not that the children and young people learned or were evaluated, but that they could arrive to a place where they felt safe, excited, with the joy that should reign at this stage of life.

That they could play, interact in peace and tranquillity, and feel embraced and comforted was the priority; in short, that they could be what they are, boys and girls, forced to grow up by a harsher reality than they should have known.

Throughout this process, my missionary mate (Pedro) and I wanted to be involved to the maximum (even though sometimes it was impossible for us to move because of the danger of the ten kilometers of road that separated our house from the school, due to attacks, raids, shootings, etc.). Our daily work, our illusion and our strength were mainly focused on accompanying and helping to carry out the daily activities for boys and girls; as improvised teachers, sports coaches, monitors, chaperones, and everything else we could imagine, we tried to offer a space of welcome and hope to everyone who crossed the doors of the street.

In February, after having stabilized the situation, the school officially opened its doors for the new school year (having lost almost half a year). The students, from 3 years old to the end of primary school, will return to their classes. In this return, the nightmare will be behind them; and I doubt that any of them will cry at the doors of the school. On the contrary, they will be eager to return to the place from which they never felt apart; the place that was for them the only space of tranquility and carefree. Parents, for their part, will feel more relieved than ever, since, if in the moments of greatest torment, they trusted blindly to protect their sons and daughters (the most precious gift they have), the return to teaching will fill them with renewed enthusiasm.

That is why, although it has another name, I have preferred to baptize it as “Hope School.”