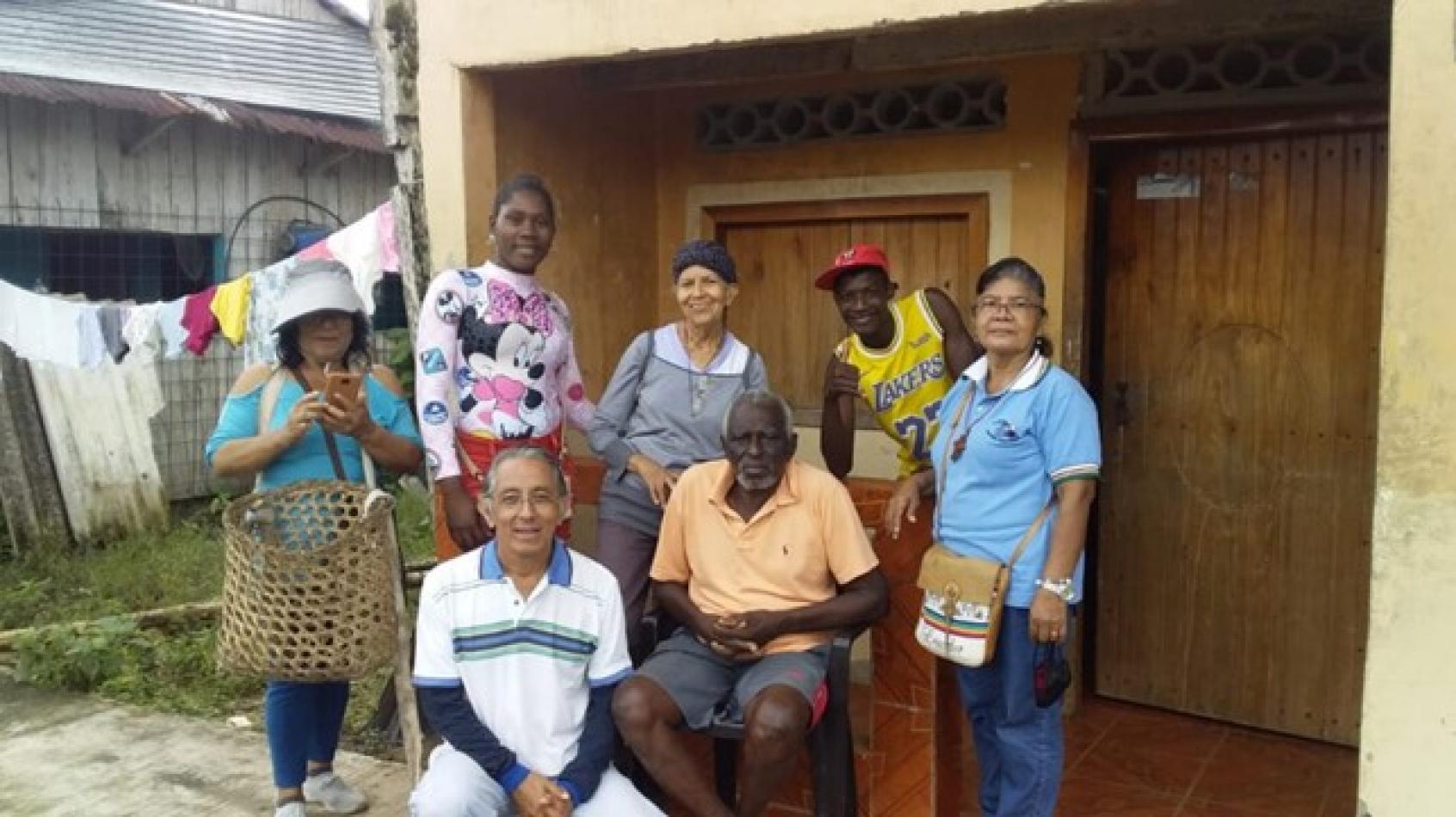 Tuesday, January 25, 2022
Our Christmas missionary service took place in San Lorenzo in the Province of Esmeraldas located in the northeast of Ecuador, very close to the border with Colombia. The group was composed of John, a member of CLM Ecuador, Maria Piedad, a CLM candidate, and Benedicta Cevallos and Jovita Castro, lay friends of the CLM. [In the picture: missionary team that visited communities of San Lorenzo, here with local people]

THE ENVOYS and the VISITED COMMUNITIES

The period we were there was from December 13 to 26, 2021; the communities visited were: San Javier de Cachavi, Chillavi del agua, Nueva Esperanza and Urbina; populations that are part of the mission of the Comboni Province in Ecuador.

Regarding the economic activity, now many of the inhabitants work in the oil palm plantations, which is not a traditional crop in our country, but has displaced the crops on which the agricultural activity of the province of Esmeraldas was traditionally focused. The labor activity of the people is mainly related to the agro-industry for the elaboration of derivatives and the export of oil.

However, these oil palm crops are one of the deforesting agents of the Ecuadorian forests, in addition to severely affecting biodiversity not only in the area of the aforementioned communities, but throughout the region of this Ecuadorian province. In addition, river contamination caused by both legal and illegal mining has resulted in the use of wells for water supply, as well as the purchase of 20-liter jerry cans for human consumption.

San Javier is a picturesque town, its people are very cheerful, pleasant, and in the midst of their limitations and difficulties they try to continue their daily walk, without interruptions that stagnate them.

The Afro musical culture, dances, lullaby singing and the execution of their own musical instruments, are a source of energy for the people; and their execution are displays of popular religiosity on behalf of the people, particularly in the days of Advent and Christmas, as the villagers took to the streets to show their dances and music with motifs of the posadas in particular the communities of Chillavi del agua and Nueva Esperanza.

In the communities of San Javier and Urbina, we gathered with the people night after night around the celebration of the novena of the Child, in which we reflected on the Word of God through the reading of life experiences that allow the participants to concretize the Scriptures with the daily life of each one.

The other community visited was Urbina:

VISIT TO THE HOMES

One of the activities that took place in these communities, is the visit to each of the houses of these villages, a very warm activity by the reception of its inhabitants, even received by those who are not Catholics, showing our hosts joy, attention to our presence. In the talks that took place, they told us their life experiences, anecdotes of other missionary visits, as well as the difficulties both at the family level and in the life of their communities. God and his Word were always present in each visit, but not before emphasizing to them that God the man has come to this world for all and not only for a few.

In spite of the difficulties arising from the poverty in which they live, all these communities are places of effort and work on the part of their inhabitants, who received us with much warmth and desire that Christmas does not go unnoticed and/or hidden by mundane social events, but that the arrival of the Son of God is transcendent for each one of their lives.

The CLM in Ecuador thank God for having allowed us to participate in this missionary service, which we lived with great joy and responsibility on the part of all the missionaries who were sent to these Afro-Ecuadorian communities, a sending that had its origin in Fr. Otorino Poletto Provincial in Ecuador MCCJ.