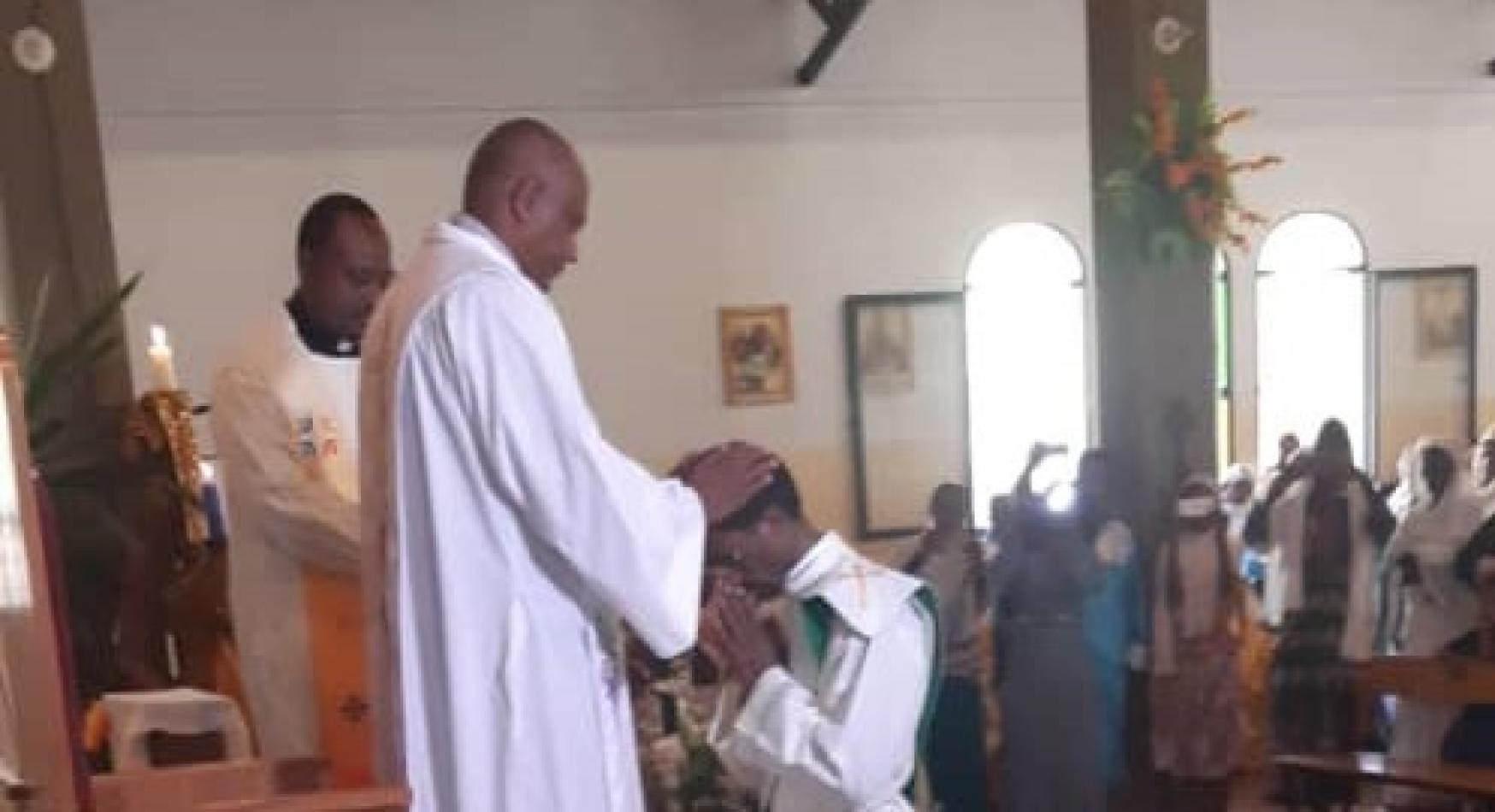 Wednesday, February 9, 2022
The Comboni Deacon Tesema Habtamu Masresha, 31 years old, was ordained priest by Bishop Seyoum Fransua, on February 5, 2022 in his village of Waragu, around 260 km south southeast of Addis Ababa (Ethiopia). His fellow Scholastic Abreham Woldetinsae Hailemariam, who is in the mission of Gilgel Beles for a period of missionary service, will make his perpetual vows on March 15 and, on the following Feast of Saint Joseph, he will be ordained Deacon
.

As many people as the beautiful Parish Church of the Holy Savior in Waragu could contain, were there for the well announced and prepared celebration of the Priestly Ordination of Abba Habtamu Masresha.

Waragu could well be considered the least of the Oromia settlements at the foot of a steep slope that had to be climbed on foot, in a not so distant past time, for the residents who wanted to have access to the facilities a bigger inhabited center like Chole could have offered. But for a couple of days Waragu became like an important spiritual center of the Catholic Faith, actually a corner of the heavenly Jerusalem, mentioned by everyone in the area and visited by important pilgrims like Bethlehem by the Magi and mainly by the Holy Spirit shining in the sheer faith of the Catholic population who accompanied His powerful action as He was invoked over Abba Habtamu by the laying of hands, conferred by Bishop Seyoum Fransua; then the shining of the Holy Spirit so visible by the eyes of faith over the faithful and the priests present there was almost literally visible also over Abba Habtamu in his humble and devout countenance, made a living image of Jesus himself and anointed with holy Chrism, to be His ministerial hand.

Abba Michael Miriti, IMC, the Parish Priest of Waragu has hosted generously and joyously the ordaining bishop, priests, Habtamu himself and various visitors, also from the Comboni Side who may have felt a bit as intruders who benefitted of the Consolata basic work in the Parish of Waragu to prepare then Habtamu as a Comboni Missionary Priest who is now assigned and actually preparing himself to go to Uganda. The Faithful themselves, who were participating at the Ordination, hearing of the assignment of Abba Habtamu applauded and manifested their joy; as the ordaining Bishop himself commented: the Lord chooses his own from anywhere, calls them and sends them where he has prepared.

The Parish of Waragu was established from the Apostolic Vicariate of Harar by some Capuchin Friars during the first World War and later served by the Consolata Missionaries up to now; it has given the Church nine priests so far, including Abba Habtamu Masresha and the ordaining bishop, Abune Seyoum Fransua and a good number of consecrated Sisters as well as a number of Seminarians. Everyone remembers how the Church of Holy Savior and indeed the faithful were miraculously preserved from the destructive incursions of hordes of attackers, at the time of the Somalia war, who did not know yet the powerful Name and the very Person of the Holy Savior.