Home
Circoscrizioni
South Sudan - (News)
Father Christian Carlassare, ahead of his Episcopal Ordination: “I entrust myself to the Lord, your prayers”

Father Christian Carlassare, ahead of his Episcopal Ordination: “I entrust myself to the Lord, your prayers” 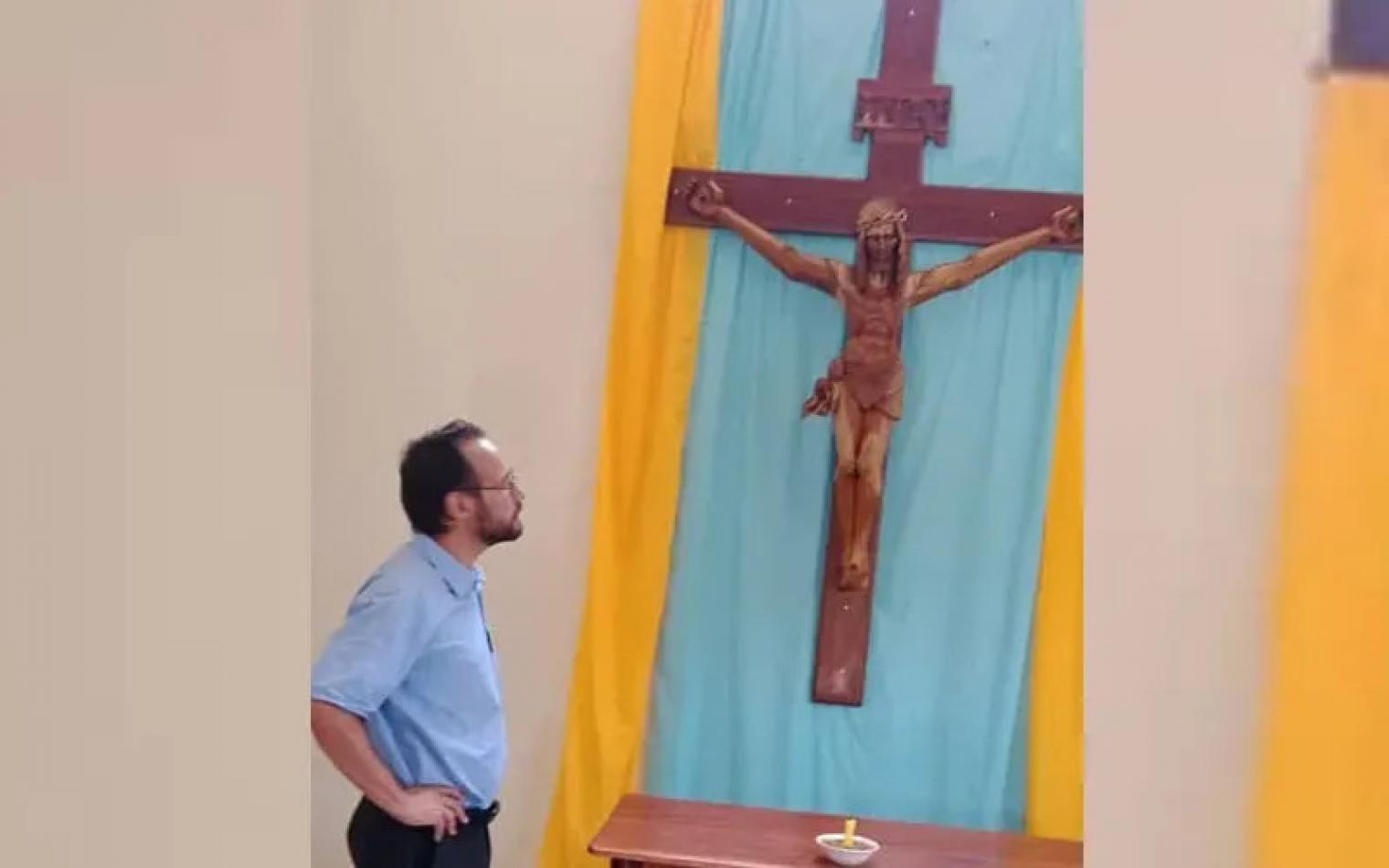 Monday, March 14, 2022
The Catholic Bishop-elect for Rumbek Diocese, Mons. Christian Carlassare is entrusting himself “to the Lord” and to the prayers of the people of God in Rumbek Diocese ahead of his Episcopal Ordination scheduled to take place on the Solemnity of the Annunciation of the Lord, March 25.

In his Lenten Message shared with ACI Africa Monday, March 14, Mons. Christian Carlassare acknowledges with appreciation the "yes" of the Blessed Virgin Mary that is celebrated on March 25, the day set for his consecration as Bishop of Rumbek Diocese. “I entrust myself to the Lord and to your prayers,” the member of the Comboni Missionaries (MCCJ) says in his Lenten Message shared on the day he met Pope Francis at the Vatican. Mons. Carlassare says that his planned Episcopal Consecration was not of his own choosing, but "given to me as a gift.”

“On March 25, the feast of the Annunciation, I will be ordained Bishop of Rumbek. I did not choose this specific occasion, but it was given to me as a gift,” the Italian-born Comboni Missionary who has served in South Sudan’s Malakal Diocese since 2005 says. He adds in reference to Mary’s words to Angel Gabriel at the Annunciation, “The ‘yes’ of Mary is a beautiful answer to the first ‘yes’ of God when he called human beings to exist.”

“I too am called to repeat my yes to the Church and people of South Sudan in a way that is perhaps a little more radical than I have managed to live up to now,” the Bishop-elect further says, and implores, “I pray that the people of Rumbek may also say their ‘yes’ to a communal ecclesial journey.”

Mons. Carlassare who was appointed Bishop for Rumbek Diocese on 8 March 2021 was to be ordained Bishop last Pentecost Sunday, 23 May 2021. The event was postponed indefinitely following the 26 April 2021 incident when he was shot in both legs. Last October, the Apostolic Nuncio in Kenya and South Sudan, Archbishop Hubertus van Megen said the Episcopal Ordination of Mons. Carlassare would take place in 2022, “at a date still to be determined.”

On February 26, the Apostolic Administrator of Rumbek Diocese, Bishop Matthew Remijio, appointed a committee to prepare for the consecration of the 44-year-old Bishop-elect. On March 14, Mons. Carlassare held a private meeting with Pope Francis at the Vatican. Hours after the meeting, the Bishop-elect told ACI Africa that the Holy Father encouraged him to take up his Episcopal Ministry with fortitude.

“The Pope said, ‘DO NOT FEAR’ and gave his blessing,” Mons. Carlassare told ACI Africa March 14. During the meeting, he added, the Holy Father “also showed his closeness to the people of South Sudan and said he looks forward to the visit of July.”

Pope Francis is scheduled to visit South Sudan in his two-African-nation pastoral trip that is to begin in the Democratic Republic of Congo (DRC) on July 2. In his four-day pastoral visit to DRC, the Holy Father is scheduled to meet the people of God in the cities of Kinshasa and Goma. In South Sudan where he is to arrive on July 5, he is scheduled to spend three days in the country’s capital, Juba, the Director of the Holy See Press Office, Matteo Bruni announced March 3.

When realized, the July 2-7 pastoral trip to the two African countries will mark Pope Francis’ third visit to sub-Saharan Africa. The journey will mark the first time a Pope has visited the world's youngest nation of South Sudan and the third Papal visit to DRC, which is home to Africa's largest Catholic population.

In his March 14 Lenten Message, Mons. Carlassare expresses appreciation to the people of God in Rumbek Diocese for their prayers. “The prayer that the people of Rumbek recited every day in my name has been a source of great strength. Thank you,” the Bishop-elect says in reference to the prayer below.

Prayer for Bishop-Elect and the Diocese of Rumbek:
Heavenly Father,
We pray for all the faithful in our Diocese.
We pray especially for Bishop-elect Christian.
Strengthen him as he continues his recovery and returns to us to take up his role as our Bishop. Bless his family Lord and all those who care for him.
May we follow his example of being a missionary of peace and courage.
Bless all those who work in the Diocese, that they will be good shepherds for the people they serve. May the sacredness of their work bring light and renewal in the service of your Church and
your Kingdom.
We pray for all those who are working in our local and national government, as they safeguard the wellbeing of the people of our land. May their commitment to justice and integrity be the foundation and inspiration of all that they do.
May we all continue to grow in faith and hope, so that the joy of the Gospel may be shared in our world. As a pilgrim people of God, we journey together, supporting one another along the way, and sharing a message of forgiveness and unity with those we meet.
St. Josephine Bakhita. Pray for us.
St.Daniel Comboni. Pray for us
Mary Mother of the Church. Pray for us.

In his March 14 Lenten Message shared with ACI Africa, Mons. Carlassare goes on to recall the 26 April 2021 attack when he was shot in both legs. “A year after my appointment as Bishop and the attack I suffered, I return to Rumbek for the Episcopal Ordination and to celebrate Easter,” he says, and adds, “I (live) with feelings of renewed trust in God who never abandons us, and in the local Church and Christian community to walk together hand in hand.”

“The South Sudanese Church is a poor Church with only few means, but rich with a lively community of people who are resilient and generous,” the Bishop-elect further says. He continues in reference to the Church in the world’s youngest nation, “It is a wounded and suffering Church, but there is no lack of faith and hope in healing.”

“It is a young Church that has a long way to go before it. It is a fragile and imperfect Church that experiences the compassionate love of God and is called to be a witness of mercy,” Mons. Carlassare says in his Lenten Message titled, “Starting Anew from Forgiveness.”

He emphasizes the need for the values of truth, mercy, and forgiveness to guarantee peace in his envisaged Episcopal See and in the East-Central African nation. “The Church of Rumbek demands truth and forgiveness,” the Bishop-elect says, adding that “since misery and violence unfortunately continue” in South Sudan, the people of God there demand “truth and mercy. Only by welcoming these gifts will there be room for peace.”

He encourages compassion that is rooted in the mercy and love of God saying, “Our heart is compassionate when the misery of others makes us recall our own misery, inadequacy and emptiness which are filled only by the merciful love of God.”

“When Pope Francis announced the Holy Year of Mercy in 2015, he shared that he had often thought about how the Church could fulfill its mission of being a witness of mercy. And he also said that Mercy is the very substance of the Gospel,” Mons. Carlassare further says in his March 14 Lenten Message. “This is my journey of Lent this year in preparation to celebrate Easter,” he goes on to say, and describes his Lenten journey as “a deep experience of mercy and forgiveness which opens the way to start anew and welcome new life in Christ.”