Home
Circoscrizioni
Moçambique – (Notícias)
Comboni Lay Missionaries in the mission of Carapira, in the north of Mozambique

Comboni Lay Missionaries in the mission of Carapira, in the north of Mozambique 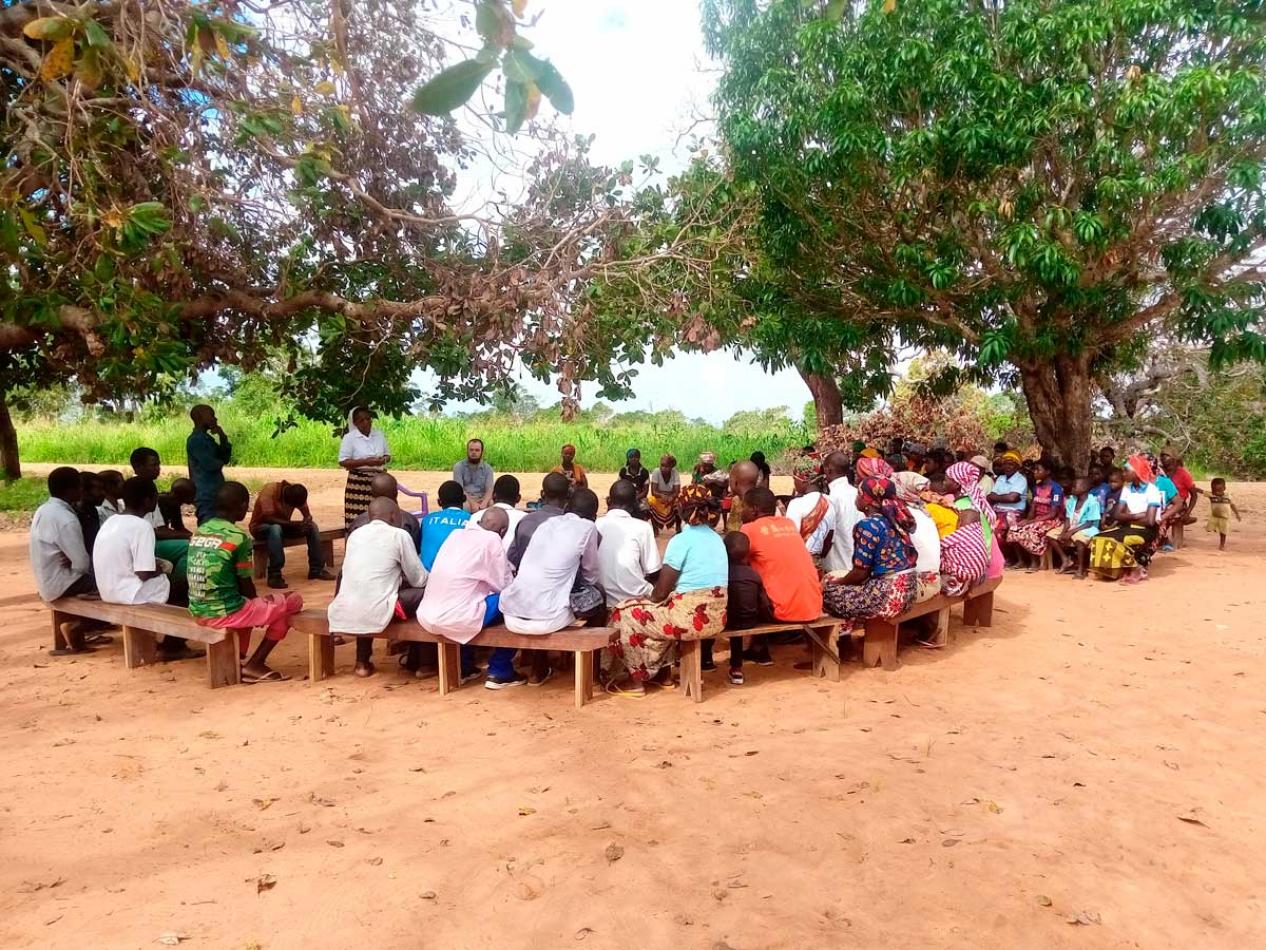 Wednesday, August 24, 2022
It has been six months of our mission in Carapira, in the north of Mozambique. Now we would like to share with you about what our life looks like and what we are doing. On March 1st we arrived in Carapira, our new place of work and mission.
[Regimar, Valmir e Bartek]

Long ago, it was planned that this village would become the seat of a diocese, so a church of impressive size was built. In addition to the would-be cathedral, there is also the Institute of Industrial Technology, founded by Combonians that attracts students from places located up to 150 km away with its reputation. Our responsibilities are divided between work in the institute (we are involved in the boarding school, secretariat, production, administration, agricultural part, library and computer room) and in the parish (we are members of the council for children and youth, vocations, education, Caritas and fraternal assistance and justice and peace).

In addition, we prepare formation meetings for people from Mozambique who would like to become lay missionaries, we prepare adoration or sharing with the Word of God, we travel to distant communities (in our parish there are as many as 93 of Christian’s communities, sometimes traveling one way takes several hours, and the Mass, it is only celebrated once a year) and we have our household responsibilities. There is a lot to do and this is very good! The more responsibilities, the less time wasted, and the rest becomes a real respite.

As I mentioned, we experience a variety of problems. It was only a few weeks ago that the long-promised construction of a house for our community began. Until then, we live in the home of the Combonian missionaries. It also turned out that the repair of the car, used so far by our lay missionaries community, is completely unprofitable. This means that until we have the money to buy a new vehicle, the freedom of our work will be significantly limited.

We also had health problems. In total, in our community, we have already caught malaria nine times. Three days after arriving in Carapira, I fell ill for the first time. I felt very weak, so I went to the local clinic to get a quick test that confirmed my illness. Apart from the alternating waves of chills and fever, I had no symptoms. I was sweating very intensely, and the mattress on which I slept looked like someone had spilled a bucket of water on it. After three days of taking medications, you recover, but your body is weakened, and you should spare yourself for the next few days. This disease was inevitable. The region we live has a lot of cases of malaria. The previous Polish lay missionary, Kasia, was sick here fifteen times in two years.

From 10 to 11 March, the province of Nampula, where we live, was struck by the powerful cyclone Gombe, which killed at least 61 people and completely destroyed 45,079 houses. The relatively low death toll is the result of previous meteorological warnings. In simple houses, mostly built of clay and wood, no one slept that night, anxiously waiting for the cyclone to come. From 9 p.m. there was no electricity and one could feel a strong wind, which grew stronger at two in the morning. It was in complete darkness that trees and roofs broke, walls crumbled and people looked for shelter in terror. In Carapira, only a few of the most solid buildings have survived. Meteorologists noted that the wind force was 190 km/h and that heavy rain fell, corresponding to a 20 cm layer of water. Water penetrated through the cracks in the doors, windows and the ceiling also into our rooms.

Although we were observing the power of the element, we were not aware of the extent of the destruction for a long time and the morning proceeded peacefully. Suddenly Father Jaider, clearly shaken, came running, saying, “Many buildings are in ruins. There are lots of women with young children near the church. They are shaking with cold. They need dry clothes. We have to help them! We have to find shelter for them, they cannot enter the church.” These last words surprised me a lot. I understand that the church is a sacred space, but the situation is critical, why can’t they take refuge there?

There was no time to ask questions. We ran to our rooms to look for warm clothes. Jackets, sweatshirts, pants, T-shirts. We came to the mission with heavy suitcases, an opportunity came very quickly to share with the most needy. With meshes full of clothes, we ran to the temple. Drenched people chattering their teeth, little ones shaking with cold. I looked inside. Water poured from holes in the ceiling, and stone parts of the ceiling fell. Now I understood why these people could not hide in the church building…

We separated the women and young children and ran with them to the nearby buildings of the former school. There was water in all the rooms, but at least one of them didn’t rain. We handed out clothes, mothers wrapped children in our jackets, sweatshirts, jackets… All the time we could hear the terrifying sound of bent sheet metal, which the element was still trying to break. This school has become a temporary shelter for the most disadvantaged. With considerable effort and at a cost, the roof in the remaining rooms was repaired. We brought mats that you could sleep on. We managed to organize two hot meals a day. We distributed roof repair foil, flour and beans to those most in need.

Many trees and an old, six-meter-long cactus fell down around the church. A group of teenage boys volunteered to help with tidying up the area. All the hot day they worked very hard with axes and machetes, carrying heavy branches and even cutting their hands. Their only payment was a cup of water with lemon juice and two cookies.

Five months have passed since the cyclone passed by the time you read this article. We are organizing a second wave of aid. We collected over 2,300 euros on the crowdfunding portal. Together with people involved in the parish Council of Caritas and Brotherly Aid, we selected the most needy. It was not an easy task, as the local population is mostly very poor. We wanted to select people who are completely incapable of work and who cannot help themselves. We visited paralyzed, rheumatic, handicapped people, people with twisted limbs, undiagnosed diseases, amputees … They were very grateful for the few kilos of beans or cornmeal, for a blanket or mosquito-net, possibly some thin sheet metal to repair a broken roof. For those who can speak, we asked for a recording of thanks. They addressed people living somewhere in the unknown land of “Poland”, using hard-to-pronounce Polish names: “Piotr”, “Konrad”, “Mariusz”, “Pawel”, “Urszula”, “Wiesławie”, “Agnieszka”: “thank you for your help”.

People here live off of what will grow in small fields. Some cassava, some beans, some corn. This is enough for a poor diet. Meat or fish is a luxury. They work very hard, in heat and with simple tools, engaging even several-year-old children to help support their family. Your only chance to earn money is to sell some of your crops when the field is well fertile. Then they wander with 50 kg bags on their heads for many hours to the nearest market. In our village, a five-year-old boy swallowed a coin and an operation was required. His parents had to sell their piglets in order to get money for a trip to the city and bribes for doctors. Simple flip-flops or a used shirt at the market cost less than 1 EUR. Despite this, not everyone can afford such “excess”. Those who cannot afford it wear torn and worn clothes, sometimes barefoot.

Poverty, unimaginable for Europeans, and the lack of prospects do not break the Mozambicans. In the evenings they play music, humbly accept the hard life in all its fullness, react with undisguised joy when we greet them in the local macua language. It is worth remembering that another generation of our great-grandparents was in a similar situation. Various novels from the turn of the 19th and 20th centuries described similar poverty, the constant risk of hunger, illiteracy, superstition, difficult access to health care, and dependence on small plots. Today let us be grateful that our houses and flats have not collapsed, that we are not faced with hunger, that we can read and write, that we can heal our loved ones for free. May this gratitude always result in solidarity towards our hard-pressed sisters and brothers.