by p. Mariano Tibaldo
The provincials and delegates of 10 English-speaking Comboni Provinces of Africa and Mozambique met in Lusaka on the 6th of May 2009 for their meeting in preparation for the XVII General Chapter.
Roma, 11.05.2009 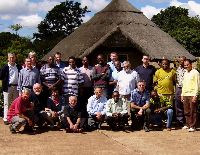 The provincials and delegates of 10 English-speaking Comboni Provinces of Africa and Mozambique (Egypt, North and South Sudan, Eritrea, Ethiopia, Uganda, Kenya, Malawi/Zambia, Mozambique and South Africa) met in Lusaka on the 6th of May 2009 for their meeting in preparation for the XVII General Chapter. The Vicar General Fr. Fabio Baldan was also present. This group of Provinces and Delegations is the more numerous of the various Continental groupings in the Congregation.

They have spent the first day introducing the participants to each other and explaining the aim and the themes of the Assembly.

They have commented and put into practice the by-laws which will be used in the Chapter itself, so various offices have been allotted to the members present as a way to practically preparation to the Chapter's activities: Secretaries, Tellers, Secretary of the Assembly, Coordinator of the Special Commissions, Moderators etc.

They are aware that, together with other confreres around the world, they are living a particular moment in the life of the Congregation, which demands openness to the Spirit, discernment and courage to take decisions.