17th General Charter of the Comboni Missionaries. Riqualifing the Mission 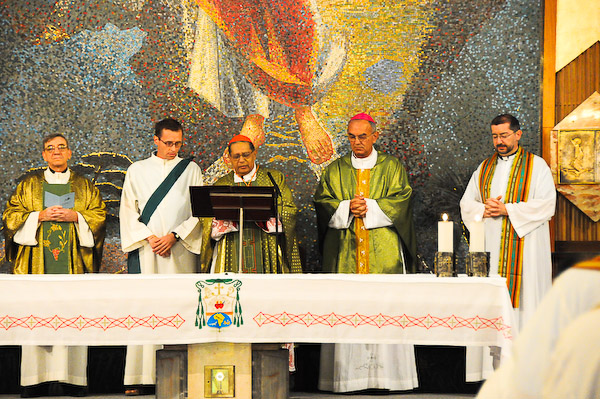 The solemn opening took place at Rome, at the General Headquarters of the Institute founded by saint Daniel Comboni. During the eucharist, presided by card. Ivan Dias, Prefect of the Congregation for the Evangelization of Peoples, both the capitulars and the invited observers expressed their public oath of fidelity to the Chapter.  Described as an ‘Ordinary Special Chapter’, it is aimed at renewing deeply the Institute so as to unable it to face the great challenges of the third millennium.

The Superior General, fr. Teresino Serra, in his letter of convocation of the Chapter wrote: “This General Chapter will be a grace from God if  it becomes a Pentecostal event’. We must allow to the Spirit the greatest possible space to act, so that he may enlighten, talk and guide us”. In his short introduction during the official opening of the Chapter fr. Teresino mentioned four ‘terms’ which must be kept in mind by the capitulars: “To recapitulate in Christ and in Comboni the journey undertaken by the Institute up to today; to listen to God’s Word which shows us the way, to the voice of God’s people and to the voice of Comboni; to celebrate, since the Chapter must be a joyous and glorious celebration of our vocation and to assess (verify) our work and our life style”.

The 72 capitulars, 45 of whom from Europe, 14 from the Americas and 13 from Africa, representing the over 1700 comboni missionaries scattered troughout the world, arrived at Romecoming from the most different places, from the heart of Europe until the most unknown localities of Africa, America and Asia. Before the official beginning of the Chapter, the capitulars spent a week of preparation, animated by four external guests: msr. Agostino Gardin, of the friars minors, Secretary of the Congregation for the Religious; fr. Adolfo Nicolàs, General Prepositus of the Jesuits (Company of Jesus); fr. Jean Roger Ndombi, from the Republic of Congo, member of the General Council of the Jesuits (Company of Jesus) and sister Adele Brambilla, Superior General of the Comboni missionary sisters. On the other hand, msr. Giuseppe Filippi, newly nominated bishop of Kotido (Uganda) and Father Pascoal Chavez, Superior General of the Salesians, led a spiritual retreat underlining the necessity to be rooted in our deepest identity, based on our personal experience of being loved by God. A new feature during the days of preparation to the Chapter has been the presence and contribution given by the previous Superior Generals of the Institute since 1979: fathers Francesco Pierli, David Glenday and Manuel Lopes Ferreira. The first days of the Chapter have been spent in preliminary questions and procedures. After the approval of the by-laws which will rule the discussions in the Chapter hall, the capitulars elected the officials of the Chapter and those responsible for the different Committees which will take care that the Chaper’s work  may proceed smoothly. General Secretary of the Chapter has been named brother Daniele Giusti, Chapter delegate for the Provinces of Kenya-Uganda. He is the first religious brother to take up such an important task in the history of the Institute. He will now be in charge of leading and accompanying  the overall Chapter’s activity.

Facilitators (Moderators) of the Chapter will be fathers Enrique Sànchez, Superior of the Central American Delegation; Daniel Cerezo, Provincial Superior of Spain; Claudio Lurati, General Administrator of the Institute and Tesfaye Tadesse, Provincial Superior of Ethiopia. The Chapter members have then chosen two special advisers to the Chapter’s Presidency, headed by the Superior General. The two councillors are, not by chance, the oldest members of the Chapter: father Venanzio Milani, one of the Italian delegates, and father Salvatore Pacifico, Provincial Superior of Khartoum (Sudan). Finally there was the election of the Special Committee in charge of gathering relevant issues and concrete proposals which will emerge, and it is made up of father Antonio Villarino, Superior of the Delegation of Colombia; Rafael Gonzales Ponce, Provincial Superior of Mexico and father Joseph Mumbere, Delegate of the Province of Congo. This variety of names and countries of origin is a concrete sign of the multicultural set up reached by the Institute od the Comboni Missionaries, founded in the second half od the XIXth century with the aim to evangelize the African continent, but which has in the meantime developed its activities to the farthest ends of the earth.