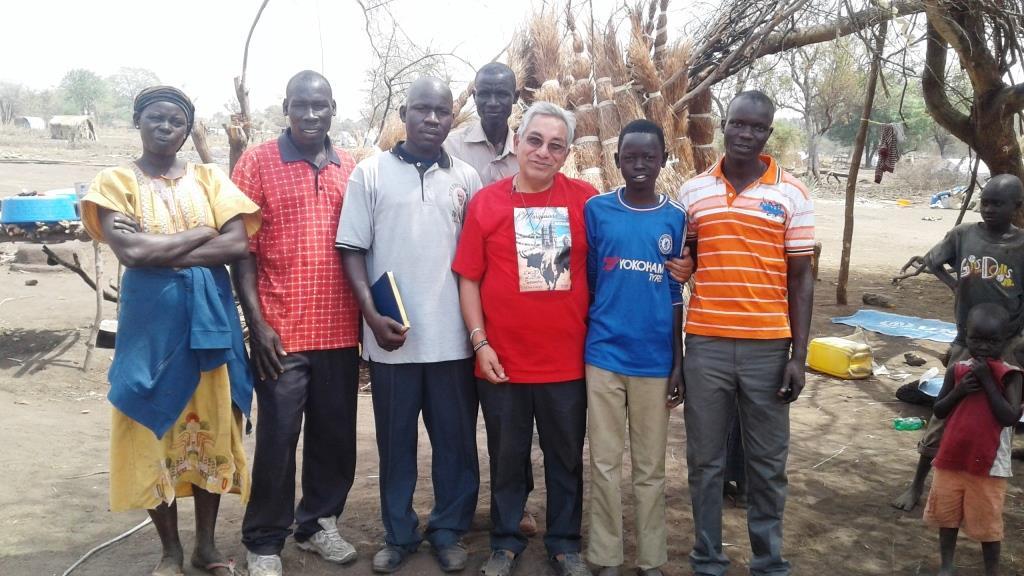 Monday, January 23, 2017
It was very striking to Fr. Jesús Aranda Nava [in the picture], Comboni missionary, the new parish priest of Kajo keji Sacred Heart parish, in South Sudan, to see a continuous stream of people carrying their belongings moving towards the border of Uganda. This was 3 December 2016, the very first day he arrived in the parish... and this was going to happen in the days to come. Why 50.000 people of the population of Kajo keji District, maybe more, have left their homes after they have been living in a peaceful environment and enjoying some development?

Among the reasons for them to flee their homes and become refugees in Uganda is the fact that there is insecurity and sporadic fighting around their villages. Also, the spreading of a lot of rumours that they would be attacked by armed groups opposing the government of South Sudan.

This kind of tactic was used in the surrounding areas of Yei town forcing people to leave the place until the small towns and villages remained empty. Moreover, most people felt that the presence of South Sudan Army around their villages would make them feel unsafe.

All these has created in them a lot of fear and uncertainties as they thought opposing forces would soon engage in fighting and they could be caught up and be exposed to danger. Women were particularly worried that soldiers would rape them and loot their properties, as it has happened in other places. They would ultimately fear death.

On top of that, the terrible economical crisis the country is facing has also affected them. They hoped international organizations would help them in the Ugandan refugee camps with some relief, such as food and education.

Facing with this challenging reality, and after consulting and listening to some of Kajo Keji residents, the local Comboni Community welcomed the initiative to pay a visit to these new refugee camps in Uganda, located not too far from Kajo Keji border. The community at large encouraged the parish priest and a catechist to do a kind of fact-finding and pastoral visit. A Comboni Sister in Lomin also joined the visiting team.

Sr. Margaret Wamaru, from the Comboni Sisters, the Head-catechist Mr. Robert, and the parish priest, Fr. Jesús Aranda, set out on a journey to northern Uganda on 9 January 2017. Their first aim was to meet the parish priests of that area where the refugee camps are located. Fr. Henry, from Moyo parish, referred the visiting team to Fr. Moses. He is in charge of the Pagirinya sub-parish, where most of the faithful from Kajo keji district have settled.

Fr. Moses was not found and the team proceeded to Morobi refugee camp, some 50 km from Moyo. The visiting team met thousands of refugee people, many of them had known the pastoral team before.

Moving around on foot with the people to see the situation they are living in, the team arrived to the place where the children and other young people were registering for kindergarten, primary and senior schools. In a few days over than 4.000 students had been registered.

The team was informed that in one of the next door camps the number of registered children was the same, and registration was still at the beginning. People asked the team to celebrate the Eucharist in that place. This would require permission from the camp management.

Fr. Moses is a young priest, 18 months of priestly life, joyful and very cooperative. He went with the team to talk with the people in charge of the camps. They were granted permission to visit the camps and were promised some plastic sheets to start chapels inside.

After this, Fr. Moses with two catechists accompanied the team to the camp of Belamelin. People were very happy to see them. Catholics refugees said they are many in the camps and showed the team a big tree where they hold their prayers under.

The team came across the family of Simon, a catechist in Mogiri, Sacred Herat Parish in Kajo Keji. He is one of the most active catechists. They also met four altar servers from Mogiri and Mondikolo.

The visiting pastoral team from Kajo Keji Sacred Heart Parish found out that the reality of South Sudanese refugees in northern Uganda camps is so painful and frustrating. People are trying hard to settle down and have been assisted with some food items, such as maize, sorghum, beans and cooking oil. Yet, they are living in a very poor condition.

Their shelters are made of plastic sheets, which are very hot to bear in the pick of the day. They get limited water, up to 20 litters per family. Food is just enough to feed a family. The Comboni community of Lomin Kajo keji is convinced that those refugees cannot be left as a people without a ‘shepherd’. Fr. Moses, the Ugandan parish priest of the area, wrote a letter to the provincial of the Comboni Missionaries, Fr. Louis Okot Tony, and to all the Comboni Missionaries in South Sudan, requesting pastoral assistance to South Sudanese refugees in northern Uganda. A positive answer would reinforce the pastoral work the missionaries are doing, even beyond the borders of Kajo keji parish.

The pastoral team of Kajo keji Sacred Heart parish is considering to soon beginning some sort of pastoral presence in these refugee camps.

Closeness to the ‘poorest and most abandoned people’ is part of the evangelization mission of the Comboni Missionaries. Kajo keji’s pastoral team sees this eventual pastoral presence among suffering refugees as a sign of hope and real presence of the loving God among them. They rely a lot on prayers and support to continue this mission of love, mercy and hope among the northern Uganda refugees.
By Jesús Aranda

Fr. Aranda among refugees, in Uganda.