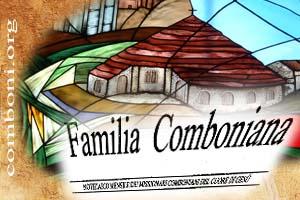 With great joy, the General Secretariat of Formation informs all the confreres that the General Assembly of Formation, a six-year event, was held at Maia, Portugal, from 9 to 30 July 2017.

The 45 participants were of 17 nationalities: a true Pentecost of Interculturality! The biblical icon that guided us during these three weeks was: “New wine in new wineskins” and our reflections were an evaluation of our Comboni Formation and a sincere quest to improve its quality. The result of our work has been compiled into a Final Document, the Conclusions of Maia 2017, which will be submitted to the General Council for its approval during the Consulta of October 2017, after which it will be officially published.

A word of thanks goes to the community of Maia and the Province of Portugal for their warm welcome and for all that they did to make our Assembly a success. Obrigado! (Fr. John Baptist Keraryo Opargiw).

Ordinations to the priesthood

September – That we may be able to carry with faith and hope the cross that is given to us, wholeheartedly believing that “the works of God are born at the foot of the Cross”. Lord hear us.

October – That all the missionary men and women who work in the various continents may proclaim the Gospel through the joy of their witness and so cause the desire for God to arise in every heart. Lord hear us.

The 25th anniversary of priestly ordination of Fr. Marin Artavia Ignacio Enrique was celebrated on the 27th of August. The celebration was beautiful, joyful and effective for mission promotion.

The solemn Eucharistic celebration was presided over by Fr. Nacho who, as it was apparent to all, acted with strong emotions and feelings of gratitude to God, to his family, to the Institute, to our community and the many friends and benefactors who had been journeying with him. After Mass there was a lunch prepared by a catering group, which was followed by some entertainment.

Commenting on the visit of Father General to the Province

It seems to me that, in his dialogues with us, Fr. General touched upon the themes of our life-choices, kept the memory of our personal journeys within the Comboni Family and reminded us of our original and present motivations. Moreover, our encounters were an opportunity to review our life and the intensity of our vocation and our joy.

I believe his starting point was the regeneration that we are trying to accomplish by means of Institutional Analysis, urging us to go to the roots of things, to remember our first missionary intuition, listen to our footsteps and see if we have been faithful to the offering of our lives.

While accompanying Fr. General during his visit, I felt, together with you, a passion for what we are and what we do. I realised that we still have love for and dedication to our commitment. There was interest in and a degree of unease with the rest of the Institute (we asked questions about the confreres, the provinces, delicate situations, missionary challenges, the organisation of the Institute, etc.).

While reliving the memory of each of our visits, one realises how wonderful is the vitality of our communities, our immersion in the life of the people and the commitment that goes beyond ritualism of mere institutional administration.

To paraphrase the words of Pope Francis, “Let us sing as we walk along; may our struggles and our concern for life and the mission never lose the joy of hope!”. (Fr. Dario Bossi)

Eleven provincial treasurers met in Rome from 9 to 23 July to study the General Directory for Finance and evaluate the progress of the various economies at provincial and general levels. A fair amount of time was spent in seeking a single computer accounts programme for all the provinces of the Institute: the treasurers understood how important it is to achieve this. Some provinces have already unified their accounting programmes while others still have a long way to go.

Unfortunately, the many changes of local and provincial bursars are an obstacle to reaching simultaneously the same objectives as indicated by the general treasurer’s office.

The study of the General Directory for Finance showed the importance of standardising criteria, programmes and work methods.

The next step, once the bursars are back in their provinces, is to inform the local bursars as to the norms to be followed and to continue to work to unify our financial criteria.

Taking as a their theme “On the way” from the Gospel story of the disciples on their way to Emmaus, a group of young people from Portugal, Italy, Poland and England took part in the first edition of the Summer Camp organised by the Comboni Missionaries of the London Province.

The young people were offered hospitality at the parish of Roehampton, in the southern part of London and recently entrusted to the Comboni Missionaries.

The large city of London was chosen as the venue for the Summer Camp for its cosmopolitan and multi-ethnic environment. It is a city that presents challenges to demanding a concrete response, especially regarding the situation of poverty and marginalisation.

The group examined three aspects of this reality.

Victoria Railway Station, in the centre of London, has the largest group of homeless people in Europe. In response to this challenge, the Catholic Church, urged on by the then Archbishop of Westminster, Cardinal Basil Hume, in 1980 opened an area called “The Passage” where the homeless are provided with food, clothing and bathing facilities. They may also avail of the possibility of finding work and a fixed abode.

Some of the Summer Camp participants assisted in preparing and serving meals, listened to the homeless as they told their personal stories and spoke of their hopes and disappointments common to all the homeless who daily come in numbers to “The Passage”.

A second group visited the Sisters of Mother Teresa at Kilburn and St. George. There, too, the young people were confronted with many personal stories. The Summer Camp participants were struck by the great patience and devotion of the Sisters as they cared for the least and most abandoned of society.

Some girls attending the Summer Camp visited Bakhita House, an organisation of the Archdiocese of Westminster, where women rescued from human trafficking are housed. The initiative is part of a project called “Bakhita”, intended to be the response of the Church against human trafficking in England and Wales. The first task is to listen, without asking questions, to those women who have risked their lives to escape and live in constant fear. The most important way to help them is simply “to be there for them”, just helping in the kitchen or playing cards with them, who now feel they are accepted and befriended without being judged.

Ordinations to the priesthood

On Saturday, 26 August, 2017, Justin Ndhlovu and Maximilian Malata Nsofwa were ordained to the priesthood in Lusaka Cathedral, Zambia, by Mons. Telesphor George Mpundu. The faithful of the two home parishes of the two deacons were present, together with a good number of Comboni Missionaries, Comboni Sisters, diocesan clergy and other religious.

Fr. John Baptist Keraryo Opargiw thanked the bishop in this fourth consecutive year of Comboni ordinations in his diocese. It is a meaningful sign for the country of Zambia that is celebrating this year the 125th anniversary of the coming of the faith to that country.

The two newly-ordained priests have been appointed to Chad (Fr. Justin) and Malawi (Fr. Maximilian).

The first fruits of Nampula novitiate

The celebration took place at the Comboni-run parish of Santa Cruz together with the family members of the novices, members of other religious institutes, friends and the youth of the parish who animated the event.

The principal celebrant at the Mass was the provincial superior, Fr. Manuel António Bogaio Constantino, a Mozambican, who, while emphasising the ever-increasing international and intercultural nature of the Comboni Institute, affirmed that the Comboni missionaries have a culture of their own with particular values inspired by the Gospel and by St. Daniel Comboni to which the original cultures of all Combonis must take second place.

Celebrating the Golden Jubilee of the parish of San Juan Pampa

On 25 June, 2017, we celebrated the Eucharist in thanksgiving for the first fifty years of the parish.

From its foundation, in 1967, until 2010, the Combonis served this parish dedicated to St. John the Baptist. The new bishop of Tarma, Mons. Luis Alberto Barrera Pacheco, a Comboni, presided at the Mass in the forecourt of the church, before a great number of the faithful, who took part, with joy and enthusiasm, in bright sunshine and in the cool air – as is usual at an altitude of 4,380 m. – since the church could not hold all the people attending.

Mons. Pacheco underlined in his homily the importance of “remembrance”, starting from the generous dedication of the Combonis who came to the parish from the Comboni Province of Ecuador to take charge of the parish, at the request of Mons. Anton Kühner, Comboni Bishop of the Prelature of Tarma. Having run the parish for 43 years, the Comboni superiors decided that the time had come to hand over the parish to the diocesan clergy.

The community that celebrated the Jubilee festivities is a lively community with many lay ministers whose members, around fifty in number, received the blessing of the Bishop. At the end of the Mass, the Bishop asked those present to do something very important, in his estimation. The faithful responded with enthusiasm without even knowing to what he was referring: producing a book on the history of the parish.

The groups were accompanied by their coordinators, counsellors, priests and religious men and women. We numbered about 300, all young, audacious and prepared to become missionary disciples.

The content of the work in groups was as follows: formation, emphasising inculturation, the role of the youth and making common cause with the poorest and most abandoned; spirituality as the foundation of our identity; mission, always including being and creating community; and the formative process of the Comboni youth Pastoral.

On the final day, during the farewell Eucharist, the provincial superior, Fr. José Martín, praised the cultural richness that embellished the Congress with the artistic items presented by each delegation the previous evening.