Third Assembly of the Comboni Lay Missionaries in Africa 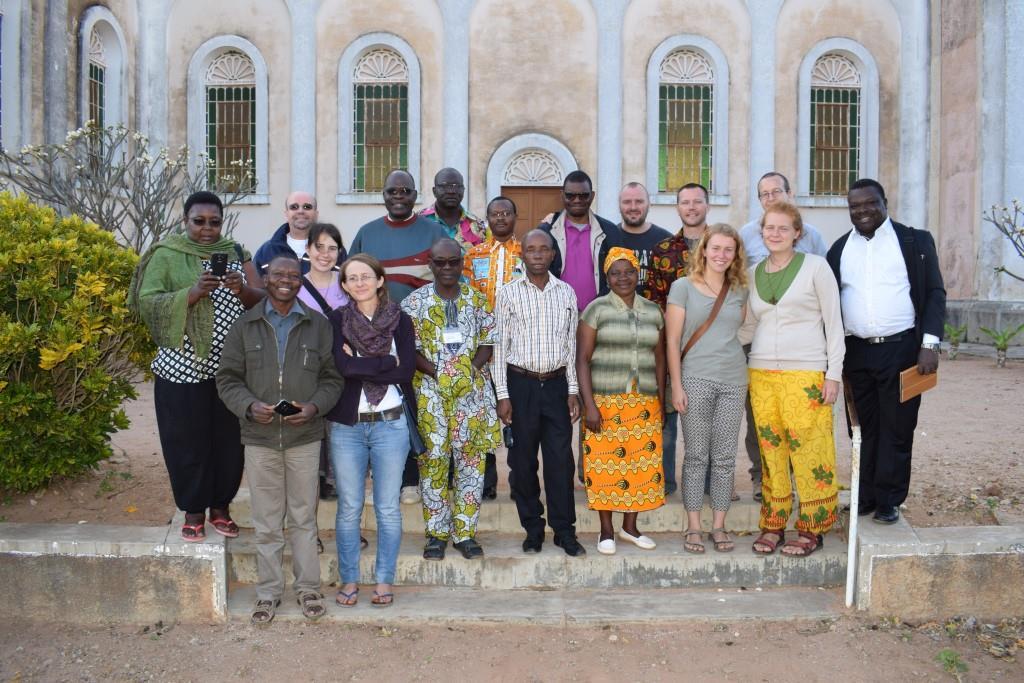 Thursday, October 12, 2017
The third African Assembly of the Comboni Lay Missionaries took place from 24 to 30 July, 2017 at Carapira. Taking part were seven Comboni missionaries (MCCJ), a Comboni missionary sister (CMS), nine Lay Comboni Missionaries (CLM) and four lay people from other groups, from eight different countries. The reflections of the week resulted in a series of conclusions on the themes of organisation, formation, fields of mission, economics, the Comboni Family, JPIC and communication – that will allow the provinces to prepare an action plan.

The Comboni Lay Missionaries affirmed that they were confident they would continue the journey begun at their first meeting in Layibi (2011) and continued in Kinshasa (2014), intending to do everything possible to actuate their vocation in the African context, despite the challenges they face. The importance of realising the missionary aspect was stressed along with the suggestion to create missionary communities within their own countries and to try to launch the missions also from without.

Conclusions of the 3rd Assembly of the Comboni Lay Missionaries in Africa
Anchilo (Mozambique), 24-30 July, 2017

The 3rd African Assembly of the Comboni Lay Missionaries took place in Anchilo (Mozambique) from 24 to 30 July, 2017.

We feel that we are on the path which was started with the 1st meeting in Layibi (2011) and continued in Kinshasa (2014). We love our CLM vocation and feel called to do everything possible to implement it in our African reality, despite all the challenges we are facing. We would like to encourage all the groups to find the way to realise the missionary aspect of our vocation – to create mission communities inside our country and find ways to start also the missions outside our country.

Let local and expatriate CLM members hold hands and walk together to fulfil the Comboni’s dream to “Save Africa with Africa”.

After our reflection together, we have come to some conclusions that will allow each province to set up a plan of action. Below are the conclusions on the different topics.

We agree that the current structure of the CLM organisation is good. The problem is how to put into practice the decisions made by the International Committees and Assemblies.

As agreed in Kinshasa and at Layibi, formation needs to be a priority.

We should exchange our formation program and themes so that we can journey together (among the country groups and the African and Central Committee coordinating teams).

Already in Layibi, it was agreed that at the discernment stage of formation, we should have had community and mission experience. We should see how to put this into practice. Each country should analyse its own situation and provide ways for this experience in a proper manner – having concrete program of activities and prayers, a person to take care of the candidates during the experience, the length of experience (like from 3 to 4 weeks). If in the country there is a community of CLM, the experience should take place there; otherwise the candidates should be accompanied by the CLM at another venue. If there is no CLM community, we can think about going to other provinces, or to organize it in collaboration with the MCCJ or the CMS.

Going to the mission “ad gentes” is still a great challenge if we talk of the African reality, mostly because of the economic situation, the different circumstances of family environment and the lack of proper preparation.

We agreed that we should continue to follow the agreement of Kinshasa:

Already at Layibi, we talked about importance of getting involved in JPIC and make it one of our priorities in Africa. We feel inspired by the encyclical “Laudato Si” and our own Comboni charism. This time we want to encourage the CLM in Africa to put it into practice through some concrete ideas:

We confirm the resolutions of the meetings in Layibi and Kinshasa: communication is essential for the success of mission and it is a responsibility of all the CLM, as it has been for St. Daniel Comboni.

Contributions from the meeting held in Anchilo (July 29, 2017) of the Comboni missionaries and the Comboni sister who are responsible of the CLM.

After a fruitful sharing among the participants of the meeting, their proposals are as follow: (1) Proposal for the 2018 assembly: to avoid the language of “local” and “international” CLM (this creates divisions and confuses the group’s objective). Care should be taken not to neglect the group of CLM formed on the country. Instead of calling “International community”, they may be called “Prioritise Community”. (2) During the time of formation, we should emphasise the aspect of interculturality. (3) The CLM living in the same country should organise their work together, plan together and evaluate the work done together.