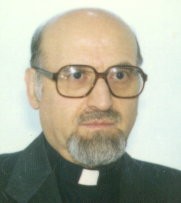 Date of birth : 03/09/1934
Place of birth : Vestenanova
Temporary Vows : 09/09/1955
Perpetual Vows : 09/09/1961
Date of ordination : 08/04/1962
Date of death : 13/11/2007
Place of death : Verona
Fr. Lorenzo Gaiga (03.09.1934 - 13.11.2007)
Fr. Lorenzo Gaiga was born at Vestenanova, in the province and diocese of Verona. His father was Silvino and his mother Angelina. He was the fourth of seven children, six boys and one girl, Eliana, who died aged 38. He was well instructed in the faith by his parents (his father was a daily Mass-goer). He attended the local school and there met Fr. Gino Sterza, vocations promoter at the time – 1948, who lit the flame of the missionary vocation in the heart of young Lorenzo. He joined the minor seminary at Trento, attended the gymnasium at Brescia and did his novitiate at Gozzano when he was nineteen. It was a time of turmoil, but Gozzano became the home of Lorenzo’s ardent youth, his holy desires of martyrdom maturing to become amazement, wonder and freshness of life. He ended his novitiate with his first profession at Gozzano on 9 September 1955.
After his novitiate he attended secondary school at Verona and then went to Venegono for his scholasticate. He was an average student of theology and gave no indication of what he would later become. He was ordained priest in his home town in 1962 and immediately had to face health problems. One of his kidneys, infected probably due to carelessness when he was in secondary school at Brescia, had to be removed. He could no longer look forward to working in far-off mission lands. He accepted God’s will, as expressed by his superiors who sent him to work in the editorial office of Piccolo Missionario (PM), the monthly magazine for children produced in Verona for the Italian province. It was thus that, starting almost from scratch, he developed his own unique style of writing, simple and direct, witty and humorous, which he almost certainly inherited from his predecessor Fr. Neno Contran and which made him “The pen of the Comboni Missionaries”, as someone described him in Verona. As he began work at the PM, he wrote missionary animation booklets and then published biographies of confreres and of other missionary men and women. He would specialise in biographies. The Lord enabled him, who would never see the missions except from a distance, to write the Acts of the Apostles as lived by the Comboni Missionaries of the past and of today and present a beautiful missionary image, smiling and positive, of the work of the Spirit through our confreres.
Fr. Lorenzo worked at the PM for sixteen years, becoming its director and expanding it to 138 pages. Those were glorious years for the PM with Fr. Cuniberto Zeziola as its administrator in charge of distribution which reached 120 thousand copies monthly. But there were countless journeys in order to visit the children in holiday camps and schools.
There came the time to leave the PM in the hands of Fr. Tonino Falaguasta. From then on, Fr. Lorenzo would be free to dedicate himself to his books and write the eulogies of the deceased confreres – more than 100 in all – published in the Bulletin of the Institute.
Almost all the deceased Italian confreres were presented by him as if they were predestined. Discreetly he examined the personal dossiers without ever revealing anything confidential or secret. With what great love and passion he made himself part of the life, virtues and human limits of the confreres which he always described in tones of good humour and with a smile. In short, the life of Fr. Lorenzo was spent telling the story of the mission.
As regards biographies, he published scores of them about missionaries and others. Up to last year he had published 102, though he preferred to measure them by the metre of shelf space. He was an expert in biographical writing and his most famous biography is certainly that of Fr. Bernardo Sartori, a Comboni Missionary who spent more than fifty of his sixty years of priesthood in Africa (Uganda).
Neither must we forget the ten years which Fr. Lorenzo spent as director of Amici dei Lebbrosi (Friends of the Lepers), the newsletter of the Follereau Association produced in Bologna and published to coordinate the aid sent to the millions of lepers throughout the world.
Fr. Lorenzo worked in missionary animation in Naples, Rome, Limone, Gozzano and Brescia, continuing his writing as official biographer of the Italian confreres.
Celebrating his Silver Jubilee of priesthood, he remarked that he had made a great discovery: “My illness, far from being a curse, has been a great gift of love from God. But it took me a while to understand this. Now I have done so and I would live the same life all over again and accept the same affliction”.
Just like ourselves who read this, Fr. Lorenzo had his own character and his ways which caused him some suffering. We all take our characters to the grave with us and his sometimes caused some misunderstandings between himself and missionary confreres, something not to be wondered at, as Comboni himself would say.
He too was purified by suffering, just as he wrote of many confreres. The ascent to Calvary was not easy for him, especially when, last year, his remaining kidney was removed obliging him to undergo incessant dialysis that left him very weak.
Fr. Lorenzo’s funeral took place in Verona on Friday, 16 November, in the chapel of the Mother House in the presence of many priests and confreres as well as religious and lay people who represented the many people who owed a debt of gratitude to him as their spiritual director and confessor. He was a confrere who knew the most secret recesses of the human heart and proclaimed the divine mercy to all.
He was interred in his native village to which he had always remained close. He rests among his people and in the hearts of the many who held him in high esteem and loved him. (Fr. Aurelio Boscaini)