Home
Justice, Peace (JPIC)
Social Forum and the likes
Workshops of the Comboni Network at the World Social Forum

Workshops of the Comboni Network at the World Social Forum 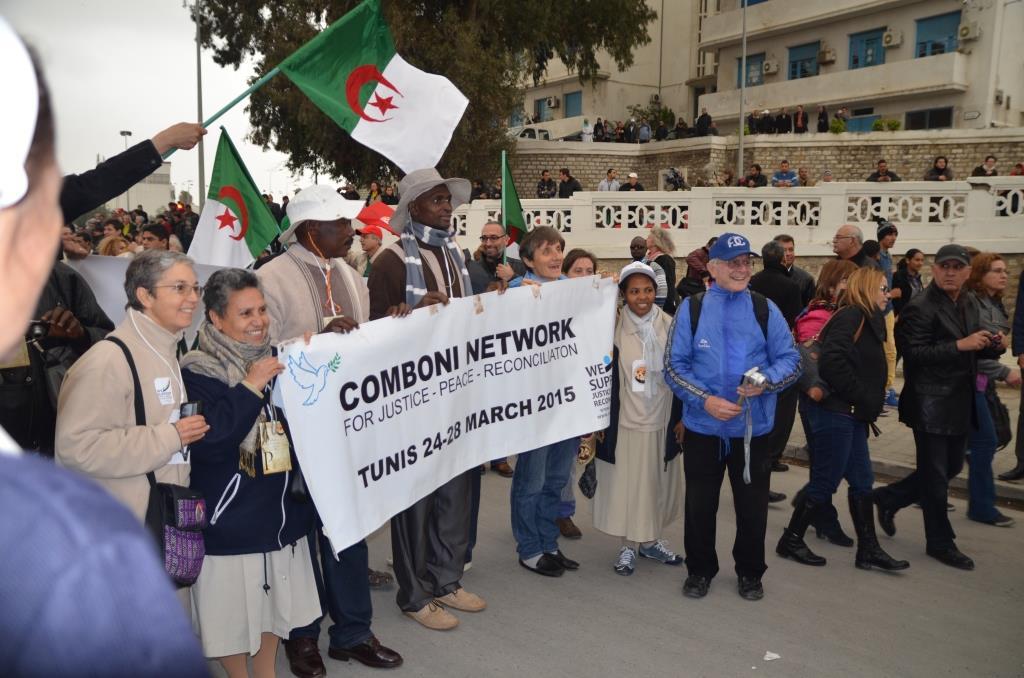 Sunday, August 7, 2016
The program of the World Social Forum (WSF), which takes place this year in Montreal, Canada, from the 9th to the 14th of August, is now official. The WSF 2016 will host about 50 000 people, from 120 countries and around 5000 organizations who want to build a sustainable and inclusive world, where every person and every people has its place and can make its voice heard. There will be more than1300 events, including arts and culture, as well as 21 Grand Conferences. The slogan of the WSF 2016 is “Another world is needed. Together it is possible!” Thirteen Comboni Missionaries and two Comboni Sisters will participate in the event as “Comboni Network” and will present six workshops on topics related to issues of social and environmental justice.

Workshops
for the WSF
in Montreal 2016:
Title and Summary
of the workshop

A brief review of Global Climate Change data and some mechanisms; the inadequacy of the Paris Agreement to prevent a disastrous level of global warming; the urgency of moving as rapidly as possible toward zero carbon emissions in the light of the rapid warming of the Arctic Circle and a variety of “Positive Feedback loops/mechanisms/systems” that are already coming into play and “Tipping Points”. [«Comboni-Network», con «VIVAT International», «AFJN»].

Land grabbing: The need of a global strategy

The phenomenon of Land Grabbing (LG) is serious: protests, complaints, information campaigns, studies and reprimands multiply; laws, agreements and initiatives are born every day; UN, international organizations, churches, NGOs watch with concern to the LG. However the phenomenon continues. Why? The countries suffering LG cases as the states that cause them, oppose any regulation of the phenomenon; the money involved is enormous; Land is again becoming the pivotal power since it is the source of everything: food, water, minerals, transportation. Topics: (1) The land problem is a global issue and requires global responses: a Global Strategy. (2) A proposal: an acronym of 4 P (Prevention, Planning, Partnerships, Prosecution). (3) Free tools to achieve it: Bibliography, Newsletter, Training all in 4 languages: Spanish, Italian, English, French. [«Comboni-Network», con «VIVAT International», «AFJN», «Actionaid», «Friends of the Earth U.S»].

RD Congo: the sacrifice of the innocent, the greed of the multinationals and the regional political interests

Greed for raw materials brings the Western and Chinese multinationals to turn a blind eye to the killings of innocent people and to promote a regional policy of chaos in order to better exploit the country's resources. In particular, it will be presented the case of eastern Congo, where people are sacrificed to economic (multinationals), political and regional interests (Rwanda and Uganda) and the maintenance of political chaos, carried out by the current President Joseph Kabila of Uganda. At the closing, will be presented some examples of peaceful resistance: LUCHA (struggle for the change of the youth of Goma) and Beni-Lubero.com site of Fr. Vincent Machozi, Assumptionist, who was assassinated in March. [«Comboni-Network»].

South Sudan and the road to peace, reconciliation and development

South Sudan is the world’s youngest nation and the home of 63 ethnic groups. Its land is imbued with enormous deposits of petroleum and other natural resources and, despite this, is one of the poorest countries in the world. South Sudan has a history of conflict and violence. Often tribalism adds to this scenario. Millions of war-weary South Sudanese pay the high price and consequences of an ongoing and deep political, economic and military crisis. How can this young African nation achieve lasting peace, stability and development? What role can the different actors play in this process? You are invited to attend a presentation on South Sudan and interact with the speakers. [«Comboni-Network»].

The Working Group on Ecological Justice will take the form of a panel where the participants will have the opportunity to freely express themselves on the theme of “ecological justice” to help us understand how the ecological injustice is created and how we can cope with it. The participants will have therefore to share their experience, their analysis of the dominant model, its consequences and possible alternatives. The ultimate goal of this workshop is to call into question the dominant economic model through an in-depth analysis of the consequences of this model, the ecological consequences that create injustice anywhere in the world, and to have a wider knowledge of the alternatives created in the South. [«Développement et Paix / Development and Peace» (D&P); «Justiça nos Trilhos»; «Iglesias y Minería»; «Comboni-Network»; «VIVAT International»].

Human Trafficking: A Crime against Humanity. A Global Challange, A Global Response!

Trafficking is a complex multidimensional phenomenon. Trafficking overlaps and merges with migration, with the employment of foreign employees in the para-slavery conditions, with women involved in the sex trade or who are subjected to marriage of convenience. Trafficking in persons is one of the three main illegal markets. The workshop aims to: present the current challenges of human trafficking, strengthen the anti-trafficking network, at the grassroots and global level. [«Talitha Kum»; «Comité d’action contre la traite humaine interne et internationale (CATHII)»; «Comboni-Network»; «VIVAT International»].